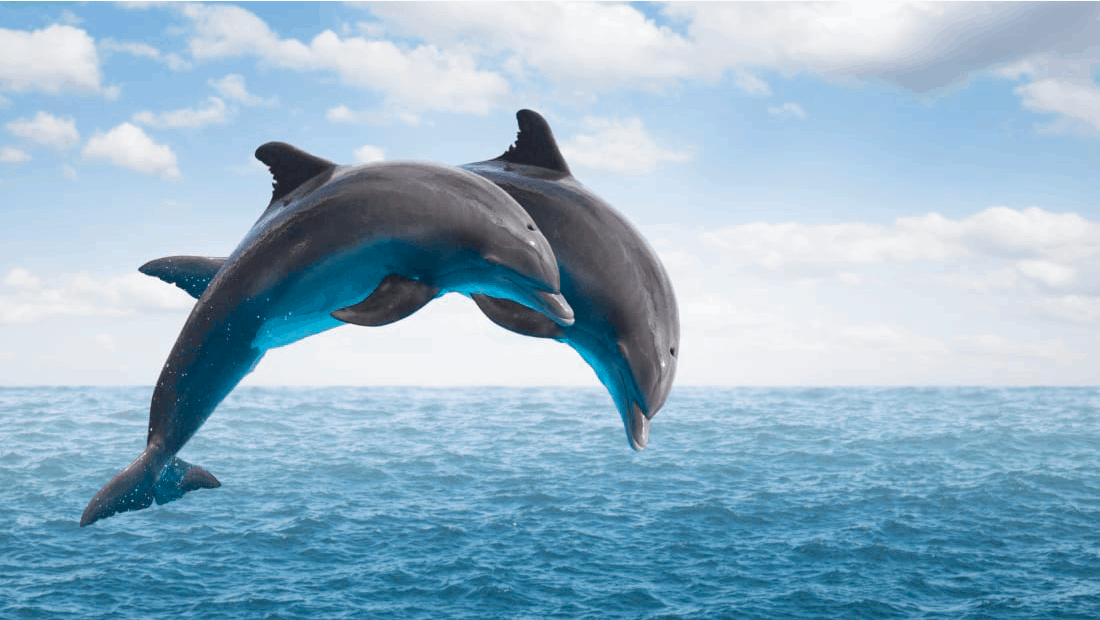 On July 15, 2019, a meeting was held at MIT on the subject of using the internet to promote interspecies communication. It was the brainchild of Neil Gershenfeld, Peter Gabriel, Vint Cerf, and Diane Reiss. Among those present at the meeting who gave presentations were Sue Savage-Rumbaugh, Irene Pepperberg, Penny Patterson, Aza Razkin, Britt Selvitelle, Patricia Grey, Con Slobodchikoff and many others of equal impact. I only had time to present about half of what is shown below.

Right after our meeting ended on Tuesday the 16th there was another meeting at MIT that I attended titled Net@50. It was a celebration of this, the 50th year of the internet. In attendance were most of the still-living engineers and scientists who had created the internet and had gotten it adopted. The lectures I enjoyed most were by Neil Gershenfeld and Juan Enriquez.

I specialize in the behavior of baleen whales. However, I will speak here about toothed whales because I think the near future may offer a grand opportunity to use the internet to eavesdrop on and make sense out of their acoustic interactions—i.e., whalespeak.

The late Stan Kuczaj [Cue-sage] ran a fascinating experiment with two dolphins: Hector and Han. He taught them tricks such as: waving a flipper, blowing bubbles, making sounds in air, leaping out of the water, and so on; but with a twist: every behavior they performed had to be a something they hadn’t yet done in that session.
Once they learned the task, Stan Cue-sage tested Hector and Han together. He would give them a command to “innovate,” meaning that the dolphin pair had to perform, in unison, some behavior that they hadn’t yet performed for Cue-sage in that session.

They got good at it; following a command to innovate, they would dive underwater, exchange whistles a few moments, then start a new trick—performing it in what appeared to be precise unison. When the trick was over, they received a reward and Cue-sage signaled them again to innovate. Once more they would submerge, make whistles and clicks, and then, in unison, perform a second trick that Cue-sage hadn’t seen in that session. This kept up until the dolphins had performed 8 tricks in unison (each for the first time in that session) at which point Cue-sage ended the session.

He concluded that either: one of them was imitating the other with so little delay and so closely that it looked like the tricks were performed simultaneously. Or: they were somehow communicating to each other which trick to do next.

Many people have tried to find out whether dolphins have a language. Currently, most scientists believe they do not. However it is one of the more vexing questions in animal behavior. I think it might be much more interesting at this point to focus on finding out as much as we can about the lives of dolphins by asking them simple questions.

Suppose you taught a dolphin to press a specific key on an underwater keyboard that stood for a particular emotion, such as anger, or fear, or affection, or dislike, or jealousy, or curiosity, etc.) I am not talking about the dolphin speaking words, just pressing keys or manipulating symbols that stand for words. You could establish such an equivalence for, say, the word “Fear” by putting a dolphin into several fear-causing situations and rewarding it when it pressed the key you had labelled “Fear.” You could also choose several situations likely to cause your dolphin frustration and reward it for pressing the key labelled “Frustration.” Once your dolphin was labelling emotions consistently, you could put her in with a group of other dolphins and watch them interact. When you saw a behaviour whose motivation you didn’t understand you could ask your dolphin, “Why did you do that?” And reward a reply such as “Fear,” or “Frustration,” or “Anger.” Such a protocol would give interesting insights into dolphin behavior as well as their capacity for communication. Critics of this approach could be expected to point out that what you rewarded the dolphin for labelling as a fearful situation might have been more like anger than fear and that you were confusing those emotions. But that doesn’t negate the full value of such an experiment. It would simply mean you were confusing anger for fear. You would, at the same time be gaining evidence that dolphins experience and can recognize different emotions.

Under the best circumstances emotions are complex and hard to label with certainty, but that doesn’t mean we can learn nothing from someone who describes a particular emotion as including a somewhat different set of descriptors than we might use to describe it. Words used to describe emotions aren’t absolutes; they are useful averages of different collections of related but not completely overlapping shades of meaning. Once your dolphin mastered the concept of labelling the emotional content of a social group, you could go on to show her videos of other dolphins, and while she was watching them ask her—”Why is Santini doing that?”—and hope for an answer such as, “Anger,” or “Affection”

If this worked, you might try asking dolphins direct questions. For example: Do you fear boats? Are sharks scary? Is your mother afraid of sharks? Is your brother? Who is most afraid of sharks, you or your brother?” You might then interview the subject’s brother and ask him the same questions. Or to gain broader insight, ask the same questions of all the individuals that you had interviewed and compare all the answers.
Or you might ask the dolphin, “Who do you like most your brother or your sister?” Or: “Who does your mother like most, you? Your brother? Your sister? Your father? Santini’s father?” Depending on the answer, it might be interesting to ask Santini’s father the same question; and to tell your dolphin’s mother his answer. Gossips often impart social information with consequences. Is it entirely unreasonable to suppose that the same may be true of dolphins?

There is another approach that might give us strong insights into the dolphin mind. To put it bluntly: It should be possible, to some extent, to “psychoanalyze” a whale. For many years there was a male Orca, Hyak, in the Vancouver Aquarium, who liked looking at pictures of dolphins and other Orcas. When biologist John Ford was running that aquarium there was in his office, an underwater window into Hyak’s tank. Whenever John went to the window with a book and exposed a picture of an Orca or a dolphin, Hyak would come over to look at it, often looking at it for minutes, first with one eye, then the other. When his much smaller tank-mate (a female named Bjossa who dominated Hyak entirely) saw Hyak looking intently at something, she would come over, push him aside, and look at it herself. But after two or three seconds she would leave. But Hyak usually stared at images for as long as John showed him pictures.
Biologist David Bain and I visited two other Orcas and tried holding up pictures of Orcas and dolphins to them. They came over and looked for a few seconds and left. Neither displayed any obvious, lasting interest.

I knew two dolphins who were taught to take a paintbrush in their teeth and, while sculling hard enough with their tails to hold their entire bodies out of water in a vertical, posture, to paint on a canvas held by their trainer. Having made a few strokes with the brush, the dolphin would subside in the water, return the brush to the trainer and wait for a different brush with a different color, whereupon it would resume its painting. It seemed similar to what you or I might achieve if we had to paint by holding a brush in our teeth while balancing on a unicycle. It probably wouldn’t be our best work.

But imagine what a dolphin might paint if it had a few art lessons and could make its pictures on an underwater touch pad while assuming a relaxed position. Dolphin paintings sell for hundreds of dollars and gain in value depending on how many paintings exist in the oeuvre of a particular individual—all prices for its work jumping significantly, following the demise of the dolphin artist. Years ago I entered several dolphin paintings in a London art show. They attracted more buyers and higher prices than did the abstract paintings made by the professional human artists whose work was also present in that show during the two days that it ran.

Might dolphin art not give us a deeper understanding of the creative abilities of our fellow creatures and useful hints about their mental lives? After all artistic creations are even harder to characterize with precision than are the subtle differences between emotions such as fear or anger, and we are less likely to withhold our approval for a painting or a sculpture until someone can provide exact descriptors for what it is meant to represent. (Of course, the best art experts often do not agree among themselves as to what a particular work of art conveys. I see this as a richly fertile field within which to grow fresh adherents for the appreciation of non-human lifeforms that can engage our interest or fascination by their art. Such engagement is the very stuff that is needed if we are to understand the fact that we are completely interdependent with the rest of life on earth, and that to allow its destruction will assure our destruction.

As I see it, any approach that increases our appreciation for the rest of life—by which I mean non-human life—is an improvement over the present state in which most people think of non-humans as inferior and dull-witted. Some creatures have skills of observation and deduction that shock biologists, and move us out of our comfort zone wherein inappropriate generalities about the modest skills of our fellow travellers control the dialog. By gaining a deeper exposure to the creative abilities of our fellow creatures might we not gain a deeper understanding and appreciation of their mental capabilities and as a result judge them with greater respect, and be more inclined to recognize that they have rights that we no longer have the right to withold?