The Night that Changed the Course of My Life 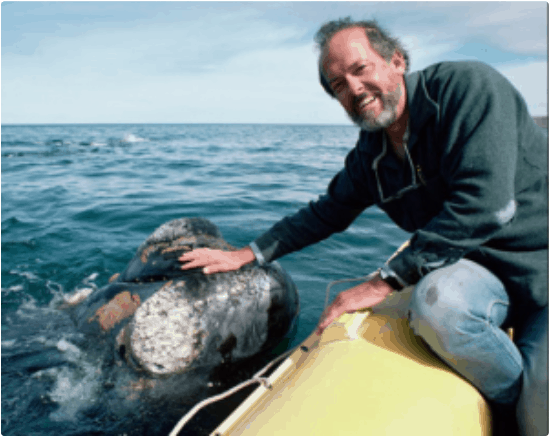 By Roger Payne, from the liner notes of Songs of the Humpback Whale

I was a neurophysiologist at Tufts University and had never even seen a whale. I was in my laboratory one March night during a sleet storm when I heard through the local radio news that a dead whale had washed ashore on the beach. I drove out there. The sleet had turned to rain when I reached the place. Many people had come to see the whale earlier, but by the time I arrived there were only a few, and when I reached the tidal wrack where the whale lay, the beach was deserted.

It was a small whale, a porpoise of about 8 feet long, with lovely subtle curves glistening in the cold rain. It had been mutilated. Someone had hacked off its flukes for a souvenir. Two others had carved their initials deeply into its side and someone had stuck a cigar butt in its blowhole. I removed the cigar and stood there for a long time with feelings I cannot describe. Everybody has some such experience that affects them for life, probably several. That night was one of mine.

At some point my flashlight went out, but as the tide came in I could periodically see the graceful outline of the whale silhouetted against the white foam cast up by the waves. Although it was at that time more typical than not of what happens to whales when they encounter humans, that experience was the last straw, and I decided to use the first possible opportunity to learn enough about whales, so that I might have some effect on their fate. 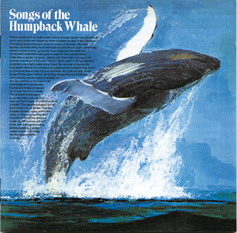 I was extraordinarily lucky; the very first thing I happened to select for study about whales was the elaborate sound sequences produced by humpback whales during their breeding season. Working with Scott McVay, a pioneer in whale conservation, we discovered that the whales were actually repeating their elaborate, rhythmic sequences of sounds after several minutes. Any time an animal repeats itself in a rhythmic way, it can properly be said to be singing., whether it is a human, a bird, a frog or a cricket. Thus, the humpback whales’ sequences were, properly, ‘songs.’

They are different from the songs of other animals in several important ways: they are longer; they are repeated without any break between songs; whales change them all the time they sing them (so that at the end of about 5 years there is nothing left of the songs recorded 5 years earlier); and some songs may include rhyming endings on some of their phrases. These latter two fascinating discoveries were made by Katherine Payne (her work on rhyming being a joint study with Linda Guinee).

The fact that whales sing, along with the beauty of their songs, gave us a chance to change the way people perceived whales. Human musicians like Judy Collins and Paul Winter began to include the sounds of whales in their performances and compositions. Killing and eating a whale now became killing and eating a ‘musician’, and the “Save-the-Whales” movement was born, founded on a new perception: the whale as artist.