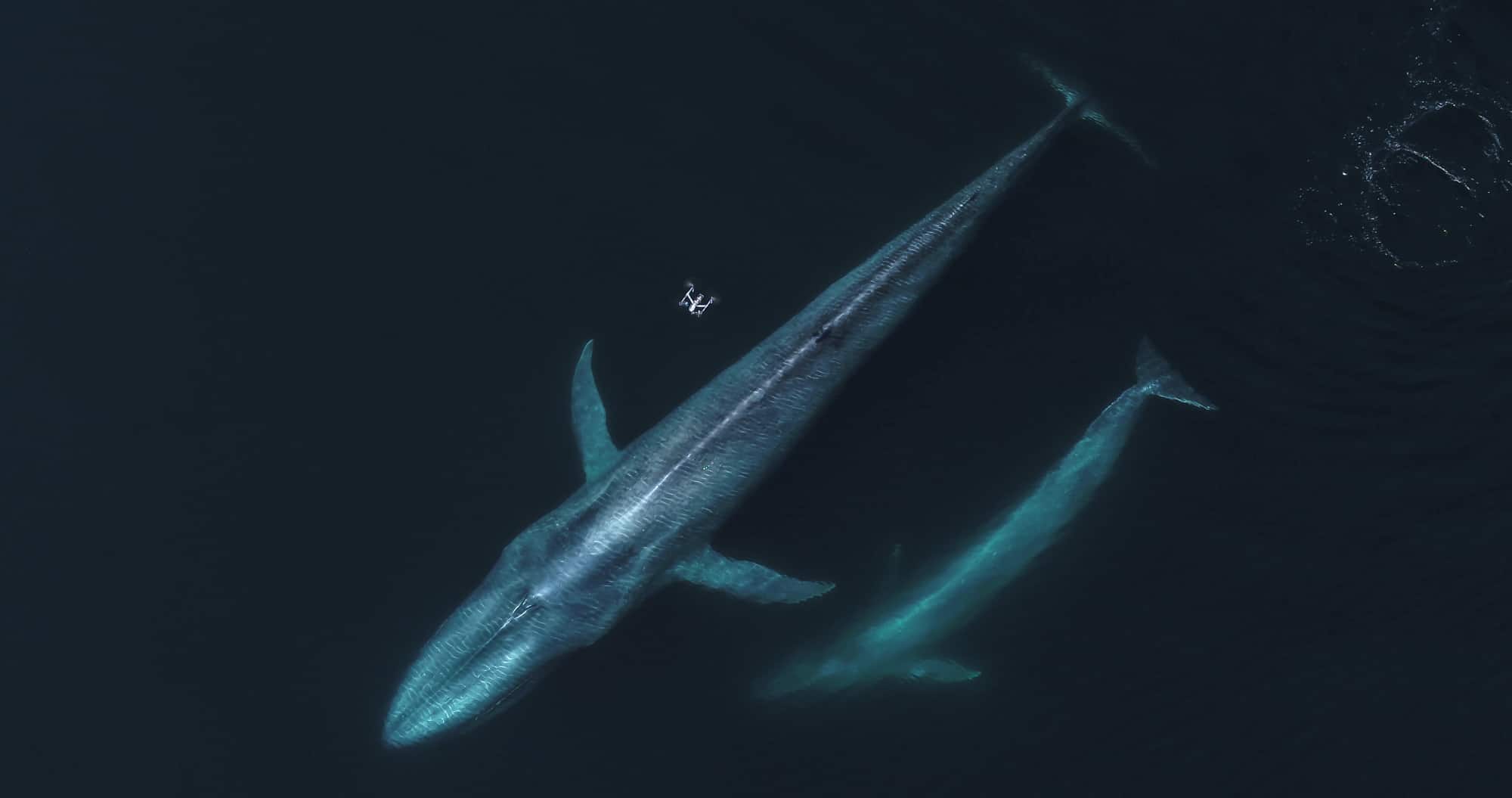 Three days after our successful Parley SnotBot expedition to Samaná, Robotics Manager Chris Zadra and I were off to Baja to join a team from the BBC. Our Drones for Whale Research work is going to be featured in two BBC Blue Planet Live TV specials.  Blue Planet Live is a series of three live broadcasts that also feature short pre-recorded segments. Three locations from around the world will be featured in each show: The Great Barrier Reef off Australia, the undersea world off the Bahamas, and our location — the Sea of Cortez. In their own words:  In an exciting week of programmes, Blue Planet Live will celebrate marine life around the globe to explore the health of our oceans.

I am over the moon to report that Ocean Alliance’s Drones for Whale Research work will be featured in both Episode 2 and Episode 3.  In Episode 2 we are using SnotBot to try and catch a blue whale exhalation live (go big or go home) and in Episode 3 the segment we just pre-recorded in La Paz will air talking about humpback whale songs and our acoustic research drone, EarBot.

The weather was not our friend during the EarBot shoot, but presenter Chris Packham and the BBC team made the best of it and were a real pleasure to work with.  We started off in Cabo San Lucas, but bad weather pushed us up the coast to La Paz. Here the Island of Espirito Santo did offer us a lee from the wind and waves but we only saw one humpback mother and calf pair in less than optimum conditions. To help us try to find whales in this location, the BBC team rented a small ultralight seaplane that was pretty cool (below). 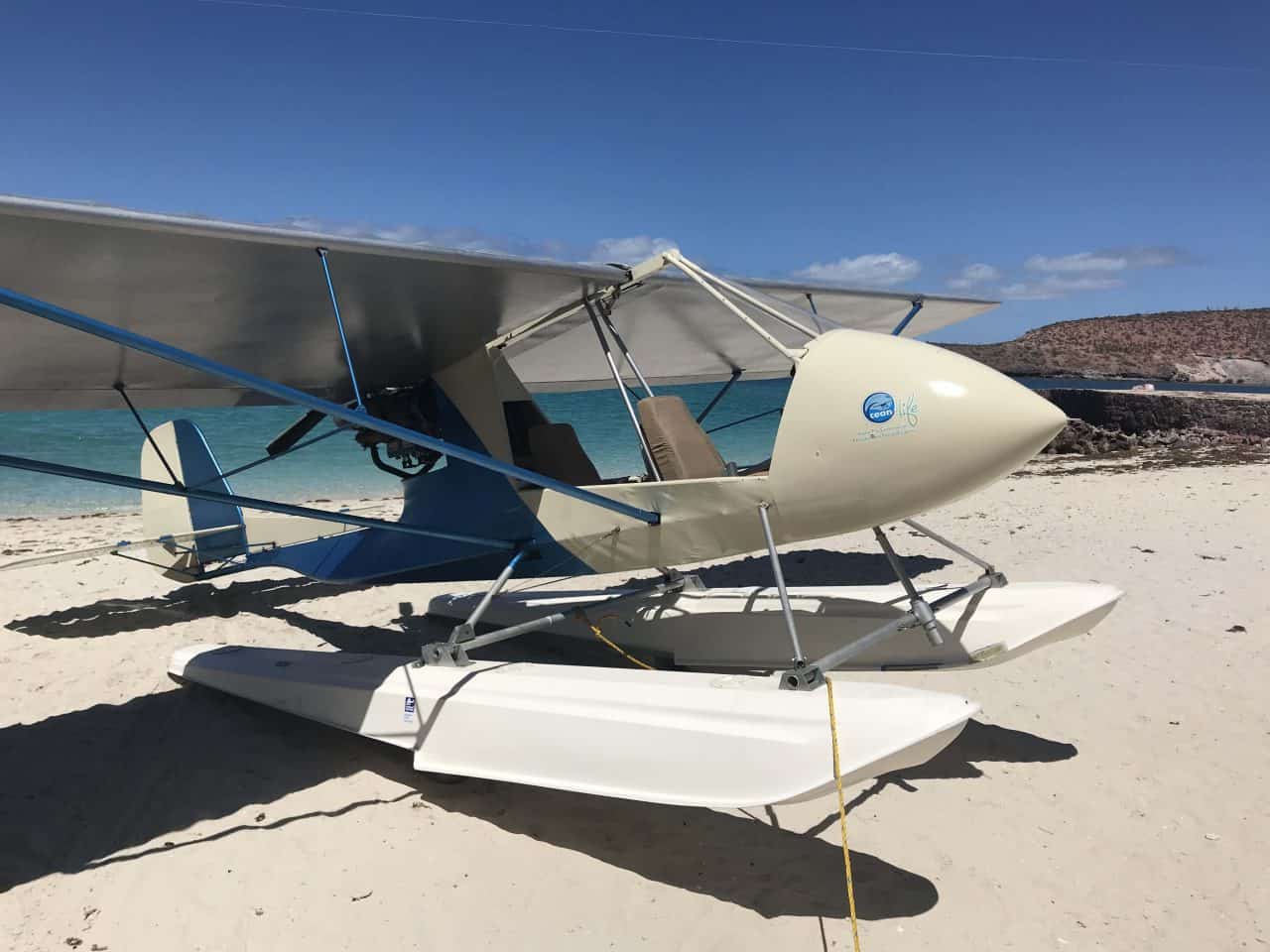 It is always a pleasure to return to La Paz, where we did some of the early SnotBot trials with Dr. Jorge Urban. This was also the location where Sir Patrick Stewart and I scuba dived with whale sharks. We stayed aboard a 48-foot expedition yacht called Storm; 15 people slept on board (12 of us plus 3 boat crew).  The only thing I can say about the berths was that you did not want to try and get out of your bunk too quickly. I have attached a series of photos from the Storm and the BBC crew working with EarBot. 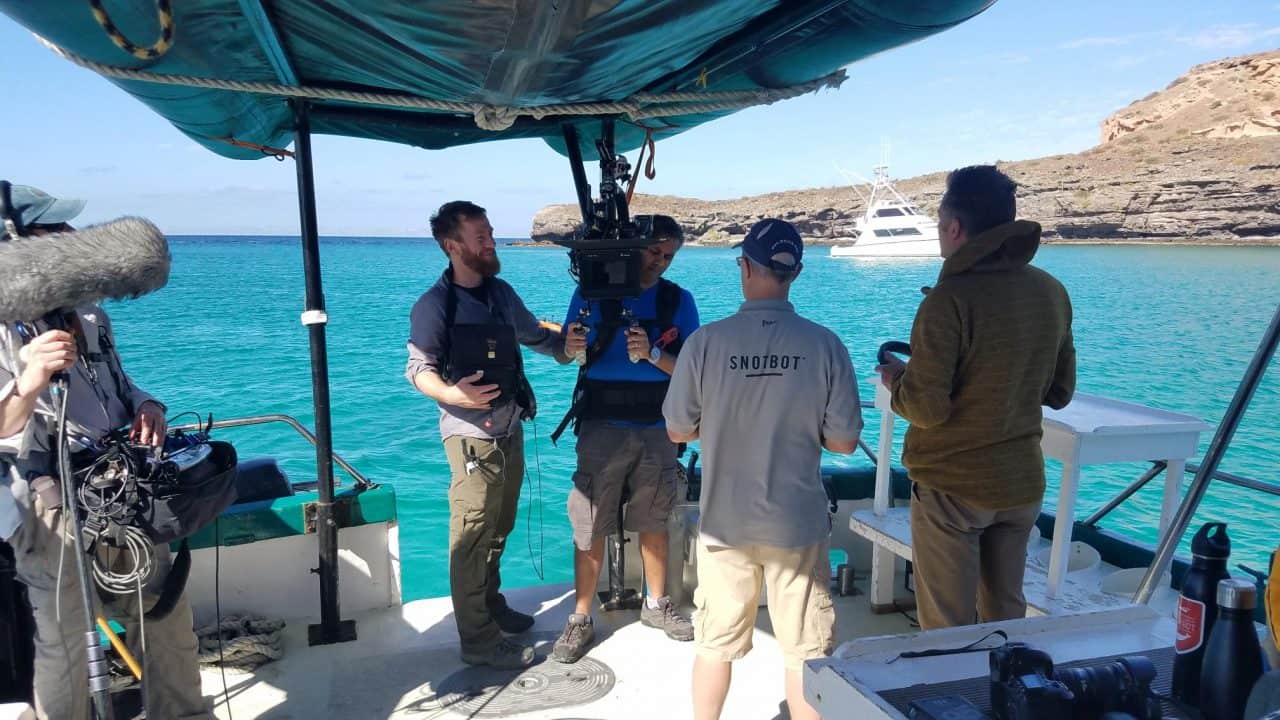 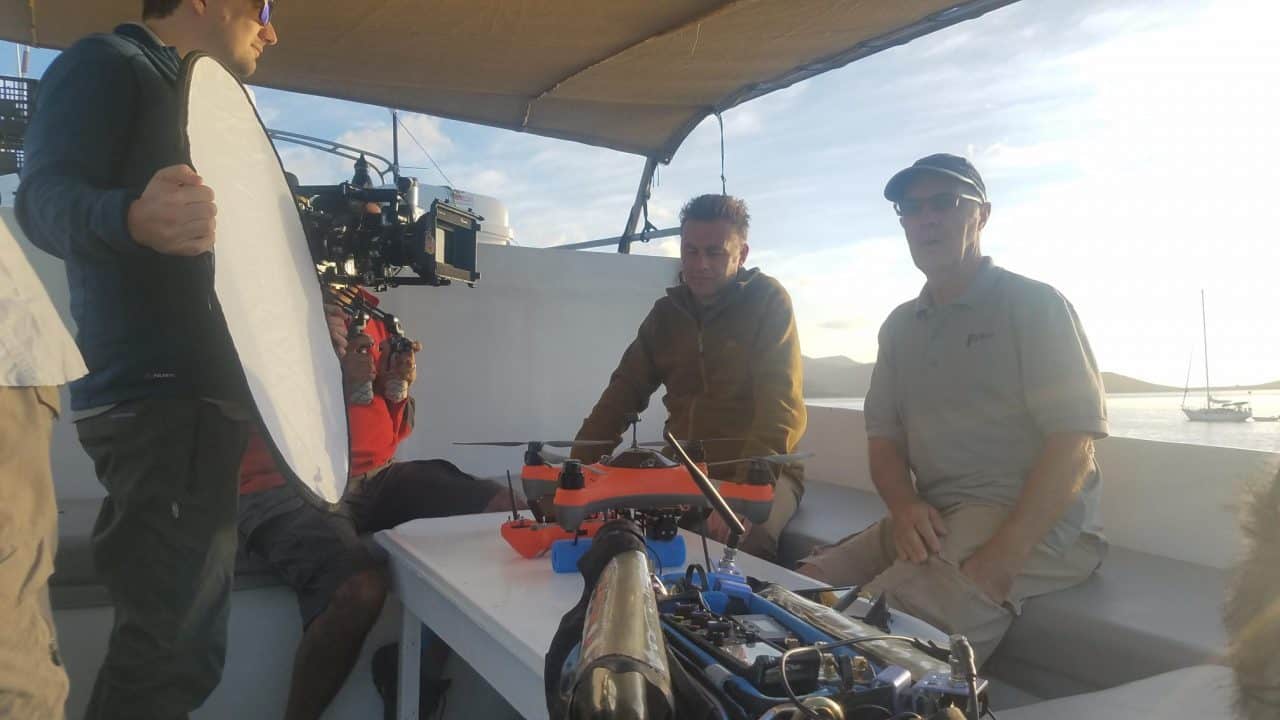 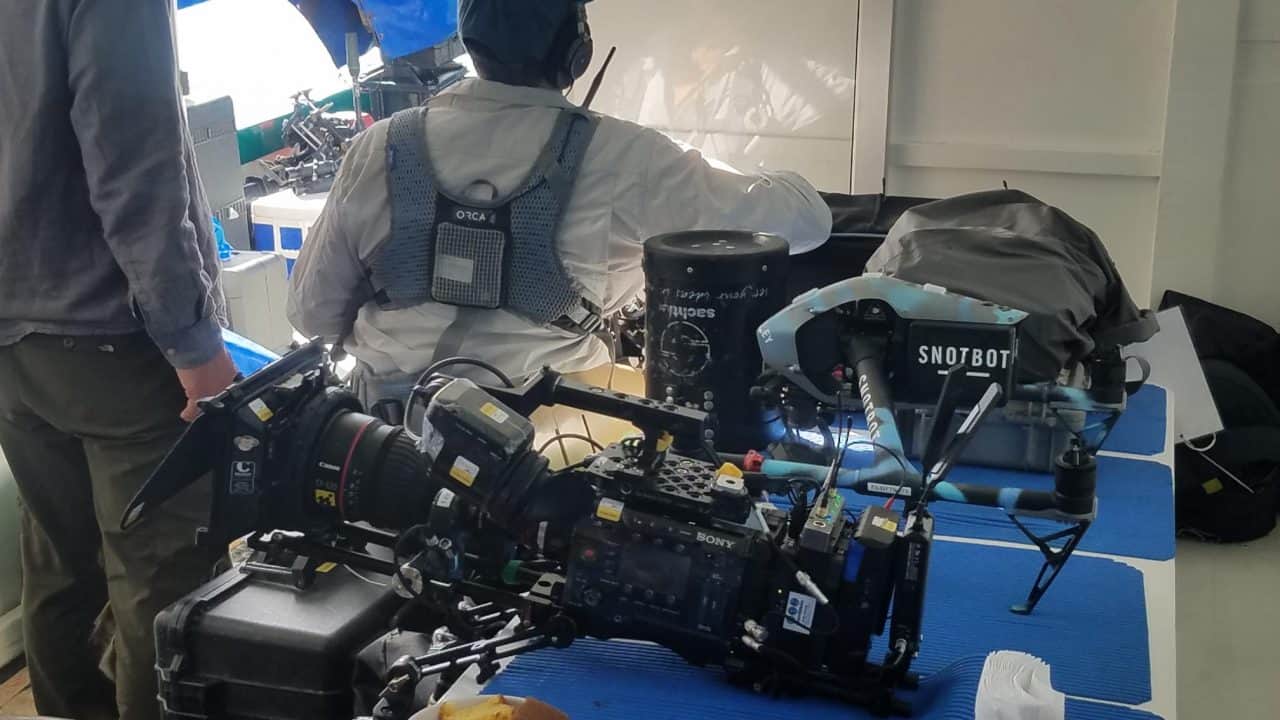 The Camera support boat MOBULA that the BBC brought in was absolutely amazing. It belonged to Florian Schulz Productions. Florian is one of those can-do-anything guys who has worked filming wildlife around the world — I encourage you to check out his website. This film boat/platform could be a long way from either the wildlife or the film crew (non-invasive) and still get totally stable close-up shots. For my tech friends the rig consisted of:

A Russian Arm – that held

A SHOTOVER F1 (6 axis) stabilizer  – inside of which was

A Red Helium camera that had a

Plus, of course, the boat that this all sat on. 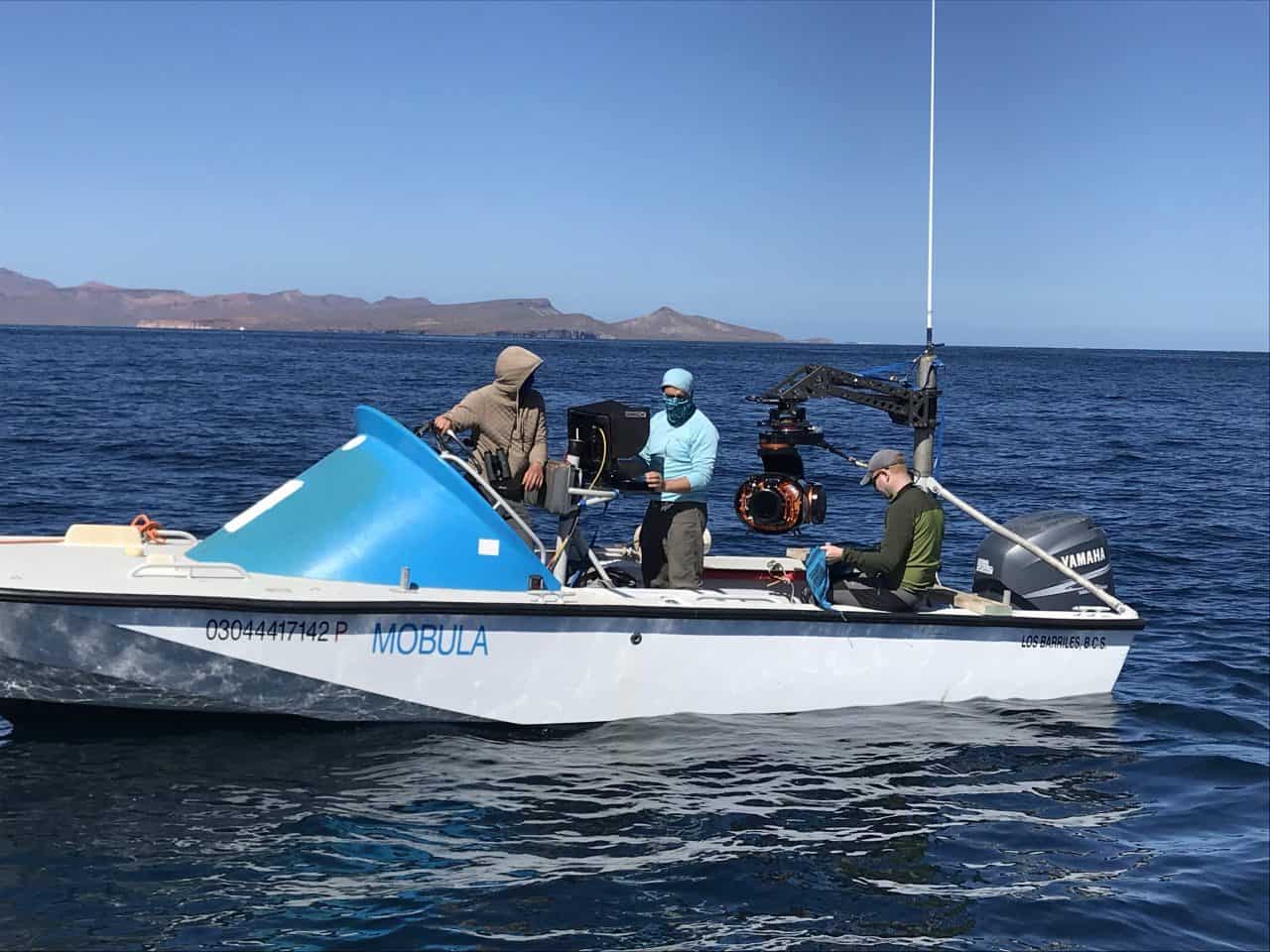 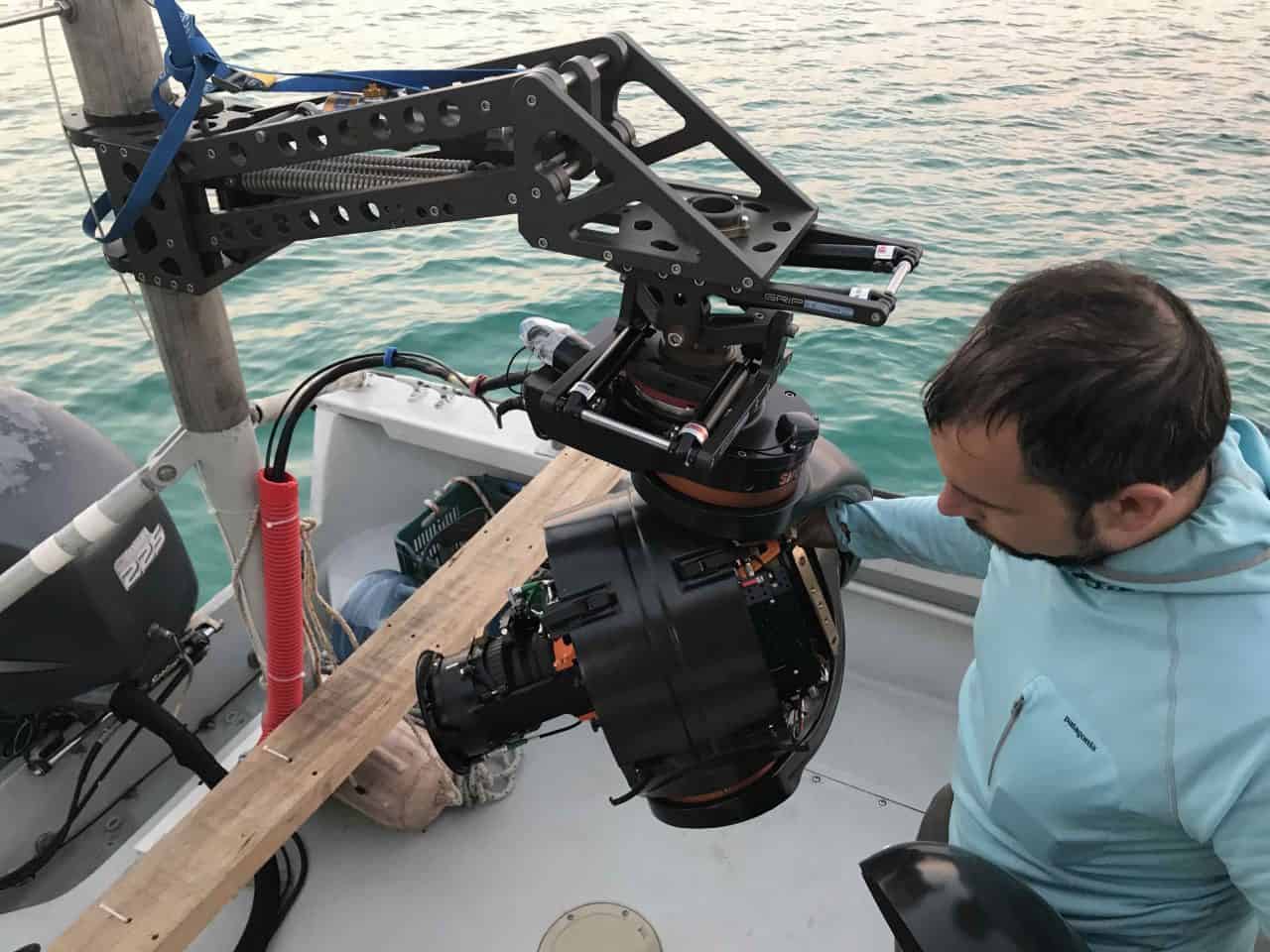 The one fun thing that I did not expect from the La Paz shoot was the strange experience of being surrounded by British accents 24 hours a day.

In less than a week we will fly back to Loreto (Baja) for the blue whale live shoot. This will have many of the same logistical challenges as our live Alaska shoot in 2017, although the Ocean Alliance team is smaller, just me (Iain), Andy and Chris. The film team will be closer to 20 people, with a team ashore manning a satellite uplink truck, a team on our boat filming presenter Chris Packham and the SnotBot team, a Freefly Alta 8 drone that will film SnotBot collecting snot and a team in a smaller boat to film our boat. There will also be a helicopter giving a high overview of the activities and hopefully helping us to find a blue whale. So clearly the BBC are putting plenty of resources to bear (and this is just one of the three live locations), but at the end of the day we will still have to find a blue whale (at the end of the whale season) within 6 miles of the satellite truck in winds of less than 20 knots in a one-hour time window. I have no doubt that this is going to be one hell of a challenge and one hell of an adventure, so please cross all fingers and toes for our success.

The whole team will be out on the water on the day before the live shoot and hopefully we will find blue whales and put SnotBot to work; if we’re successful, then on the day of the live shoot if the weather is terrible or we don’t find any whales we can at least play a “recorded the previous day” segment. My hope is that we can find a blue whale early on the day of the 27th and conduct a focal follow (stay with it) until 2:00 pm Baja local time for the live show, but believe it or not we have had blue whales dive and then have never seen them again. When this happened in 2018 I said to my crew “How the heck can we lose the largest animal on the planet?” We will be keeping any blows we collect on this trip for analysis and the type of focal follow we are planning for the 27th (where you follow an animal for a number of hours and collect multiple blows) is a key step to validating the efficacy of the samples we collect and how we collect them.  The hope is that all the blows that we collect during a focal follow will show similar biological results., validating this data collection methodology. I have long wondered if different parts of the whales exhalation are more biologically active and if different blows (first second or third) are more biologically productive. For example, when I sneeze, the first sneeze of any sequence seems to be the most productive. Maybe we can answer those questions on this expedition?

One of the key SnotBot team members, Christian Miller, will not be on this shoot. Considering that the shoot is only two days and we are only staying two more days after the shoot to collect data, it was a long way for him to come from Australia for only four days’ work. We will miss you, Christian!! I have attached a couple of Christian’s stunning blue whale photos from 2018. 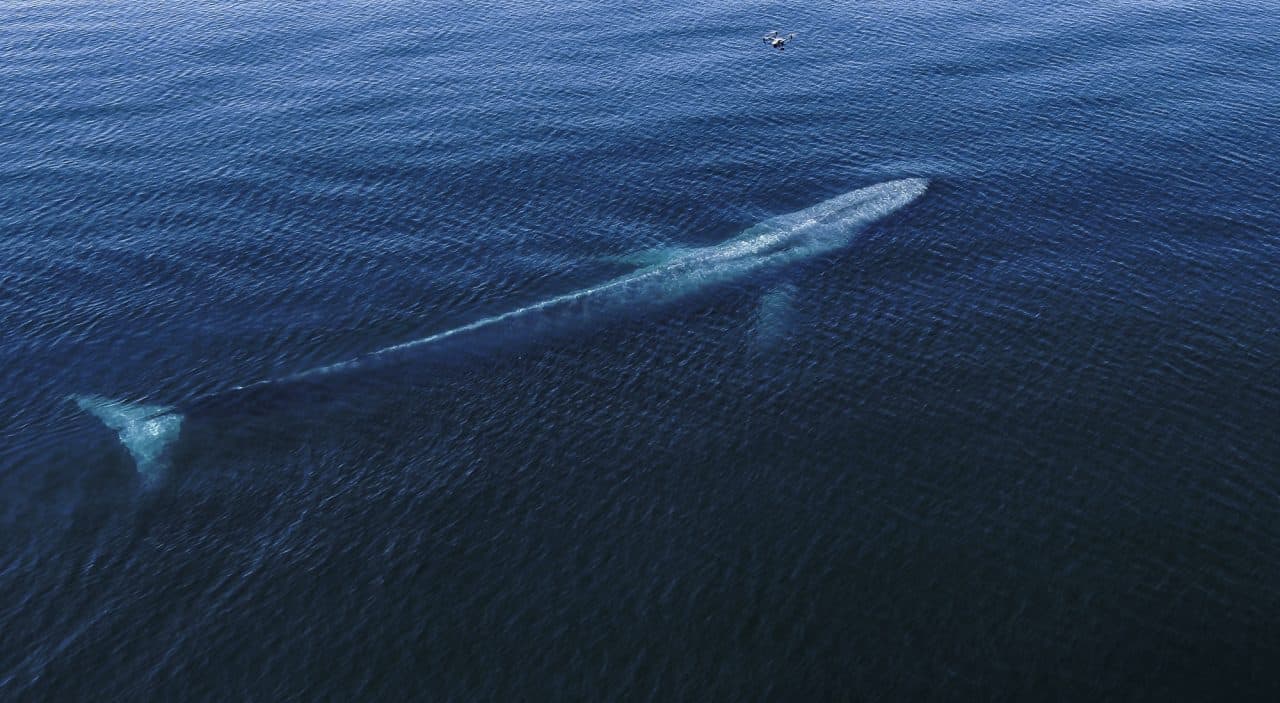 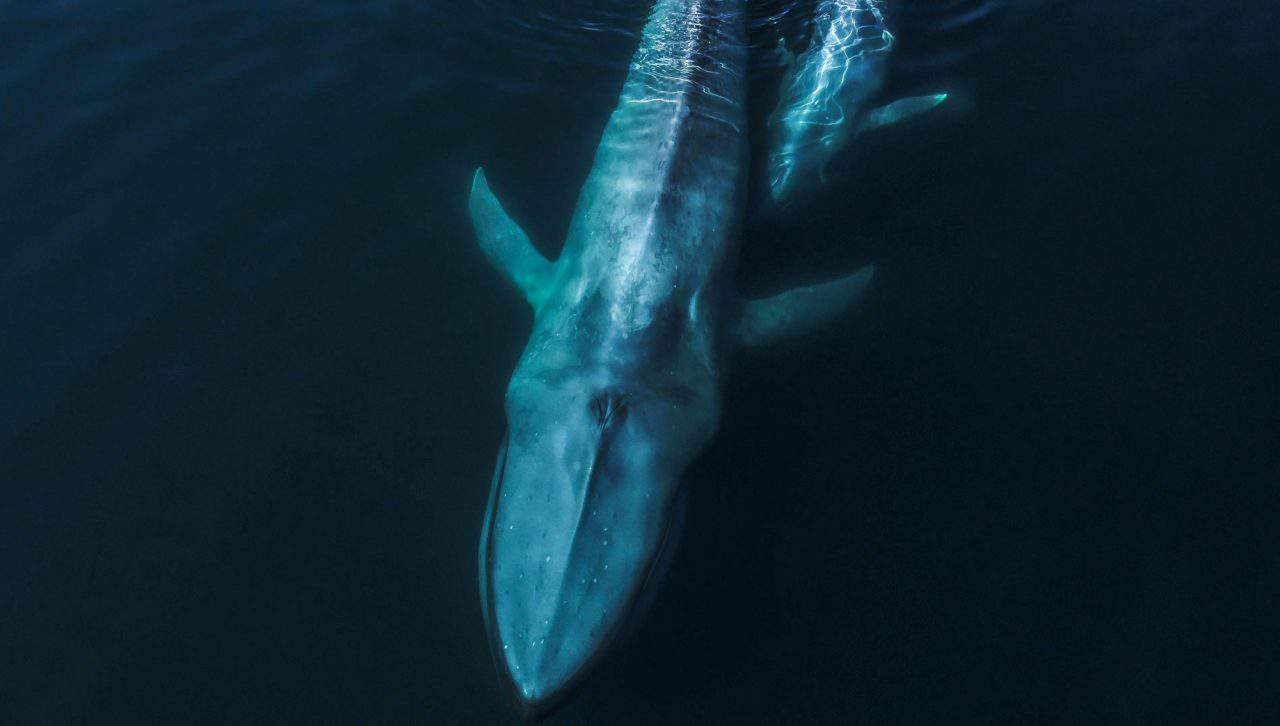 To be very clear here, the idea of collecting a blue whale exhalation on live TV is an extreme one; you have to be a serious optimist to even take this on (maybe the type of person who would buy an abandoned and polluted paint factory with the idea of converting into an oceanographic center). It is not that easy to collect an exhalation from a whale period. That said, I do believe that SnotBot is more than just an innovative biological research tool, it is an education tool (what kid does not like snot or poop) and a tool that is making science and learning more accessible worldwide (TYP). So we are very grateful to the BBC for giving us this opportunity to remind people of the importance of ocean and marine mammal conservation.

I will be sending updates from the Loreto shoot, until then….