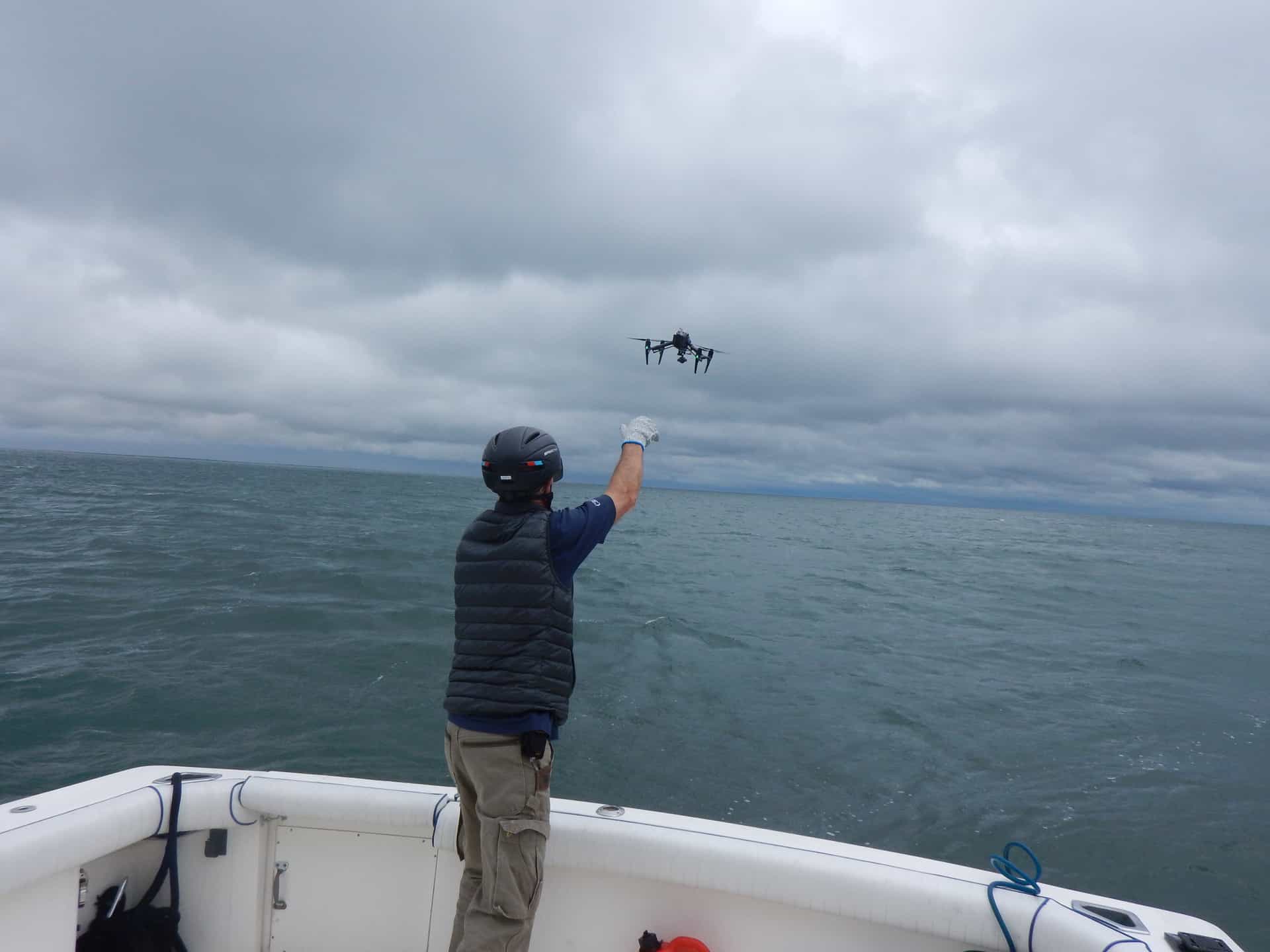 Dr. David Wiley is the research coordinator for the Gerry E. Studd’s Stellwagen Bank National Marine Sanctuary, and an all-round good guy.  I have known Dave for over 25 years, but we have not had an opportunity to work on many projects together. In the fall of 2017, Dave and I talked about changing that by bringing some Ocean Alliance expertise and equipment on a NOAA humpback whale tagging expedition planned for June 2018.
The first week of June Britta Akerley, OA Data & Office Manager, and I went to meet with Dave and Mike Tomson (GIS analyst) at the sanctuary headquarters in Scituate, MA. We had a great meeting. All was looking good for the upcoming collaboration, and that’s when things started to go awry. Boat technical and launching issues, meant that three days after the collaboration was meant to start our boat, the RV Cachalot, was not yet in the water. 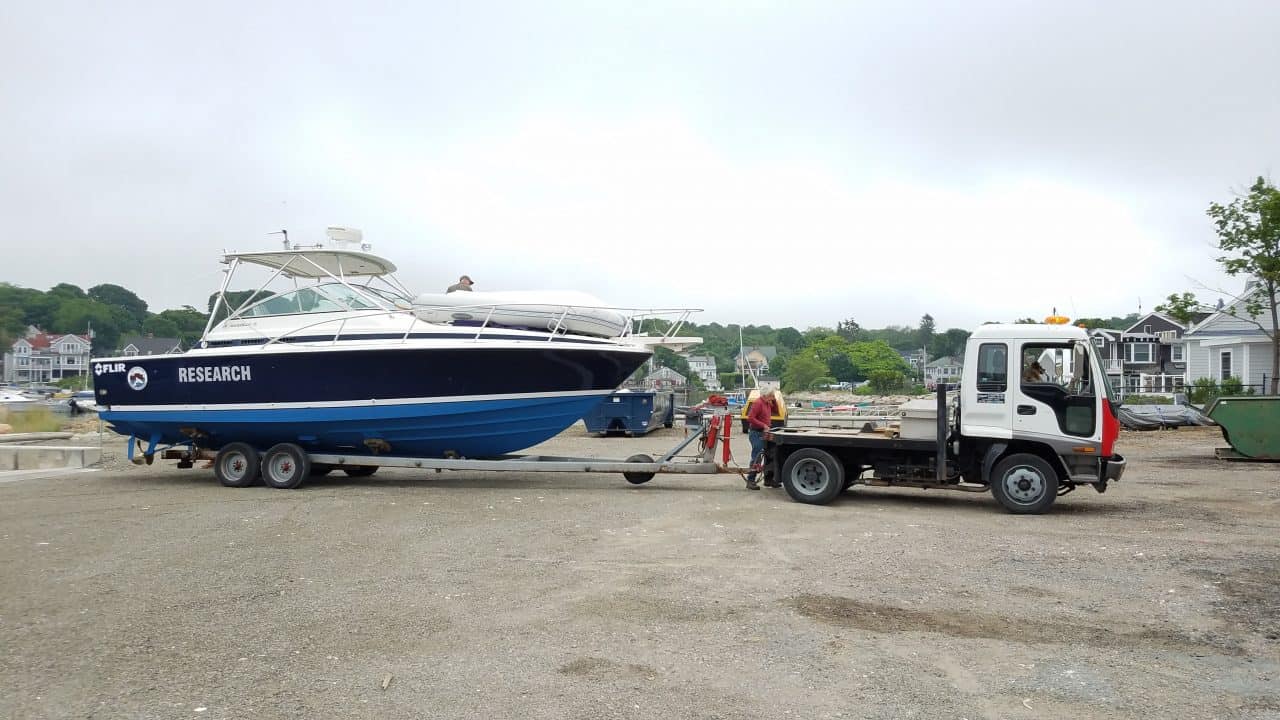 Thanks to a herculean effort by all, by midday (Sunday the 24thof June) the RV Cachalot was in the water after seven months on the hard.  The original plan was to do a couple of sea trials before we ran the 70+ nautical miles to Stage Harbor, Chatham, MA, but time was not on our side, and we were in well-traveled waters, so I told the crew (Office and Data manager Britta Akerley, Robotics Program manage Chris Zadra, and summer intern Alicia Pensarosa from Tufts University) that we would run for an hour and stop and check all systems, which we did.
All in all the Cachalot ran very well for the first hour, but when we stopped there was evidence of salt water scattered around the aft engine compartment, with no sign of a leak sitting still we got up to speed and saw that the dripless shaft seal was leaking.  I had experienced this problem before on the Odyssey, and with a couple of tie wraps I was able to stop the leak.  Onwards!! We ran the next 50 miles in uncomfortable seas but in good spirits.  As you are aware, I have run or participated in close to 100 expeditions in my life and since this one was based out of our headquarters in Gloucester, MA, I was feeling good … until I looked ahead and said to the crew “Is that Fog?”  It was, and we had yet to traverse the infamous Chatham Shoals off the southernmost tip of Cape Cod. 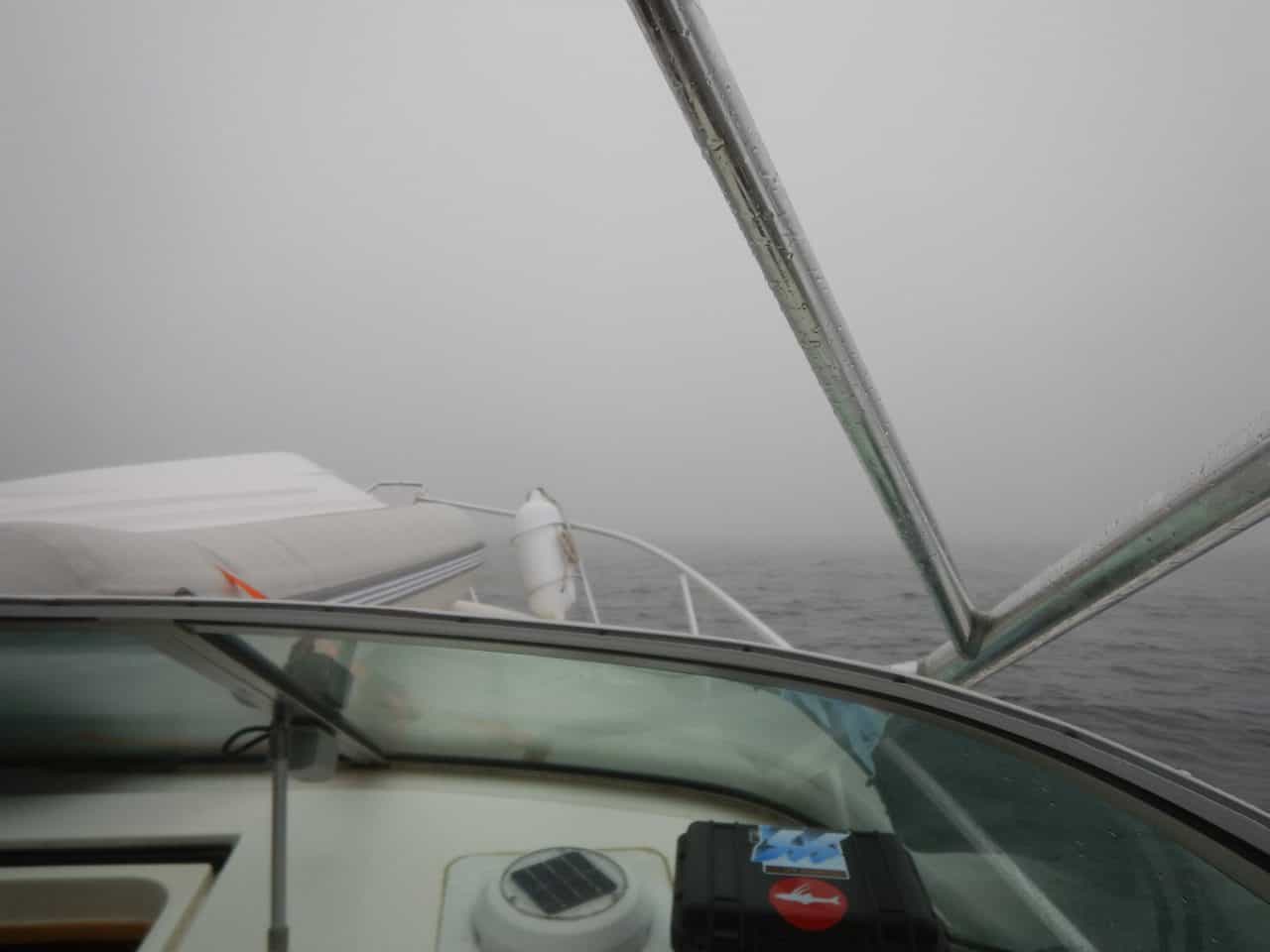 As I was trying to get a handle on the situation, a small powerboat appeared out of the fog going at full speed turned 90 degrees and disappeared. So much for my feelings of confidence, everything suddenly seemed to get exponentially harder. The Chatham Shoals are Cape Cod’s ship graveyard. Shifting sands means that a deep-water passage one year is shoals the next.  There are three principal passage routes, the closest to our destination being the most difficult and the furthest away being the easiest. In the fog I chose the compromise, the one in the middle.  Over the shoals, and both physically and mentally exhausted, we picked up a mooring in Stage Harbor at about 9:00 pm Sunday night, six and a half hours after leaving Gloucester, only to find that most of the restaurants in Chatham close at 9:00, so we had left over sandwiches for dinner.
The next day (Monday) the winds picked up to 20 plus knots, so we could not go out onto the whale grounds, but we did leave the harbor and do some drone and photogrammetry trials in what could only be described as less than satisfactory conditions.

Tuesday looked good weather wise but the forecast for the rest of week was not looking good, increasing winds to 25 knots plus on Wednesday afternoon, Thursday and Friday.  To put it mildly I was not happy; it looked like we would only get one good day with Dave and the NOAA team. How much can you cram into one day you ask? If you are Ocean Alliance it turns out a LOT!

We brought with us equipment to conduct three principal experiments: photogrammetry, FLIR and Parley SnotBot. We also hoped to gather some aerial behavioral data. I did not expect to be able to do all of these experiments in one day, but we like to keep our options open. To do this work we had four drones on the Cachalot, two Inspire 2’s, our FLIR Matrice 210 and a Mavic Pro. We mounted a drone rack in the Cachalot’s main cabin to hang our drones while underway – on previous expeditions we have found that this works well and keeps them out of the way. 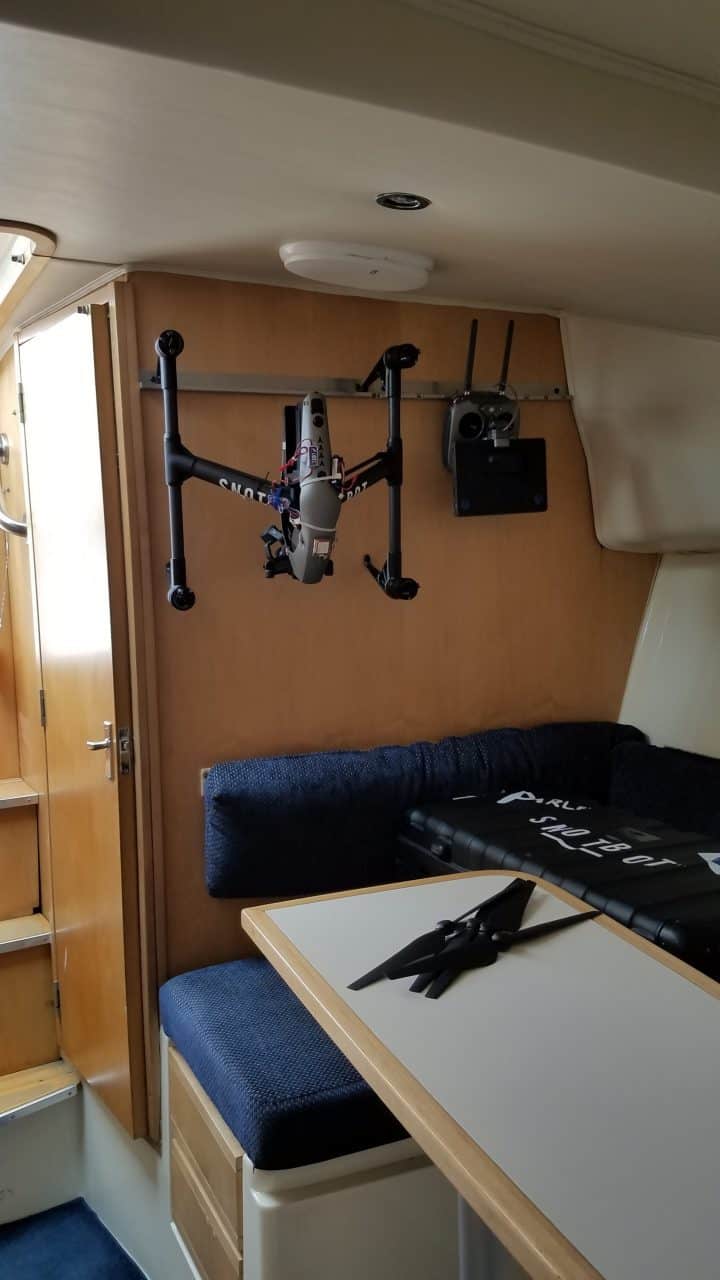 At 7:00 am Tuesday morning we were on the Cachalot ready to leave Stage Harbor.  A member of the NOAA team, Laura Howes, was going to join us for the day to photo ID the animals that we were working with.  Just before we dropped our mooring, Dave came by the boat and said they were having some generator problems on the main boat and could we take some tracking gear to help find a tag that had done its job and was drifting on the high seas.  They had a location where the tag had been about 4 hours before (which would be a pretty good indication of where the whales might be).  So we had an additional job on top of our already long list, but we were excited to help and see the retrieval process.  An hour and a half NE of Chatham, Laura was on the bow with her magic wand (Yagi Antenna) trying to locate the tag — I say magic wand because this looked like both science and magic. 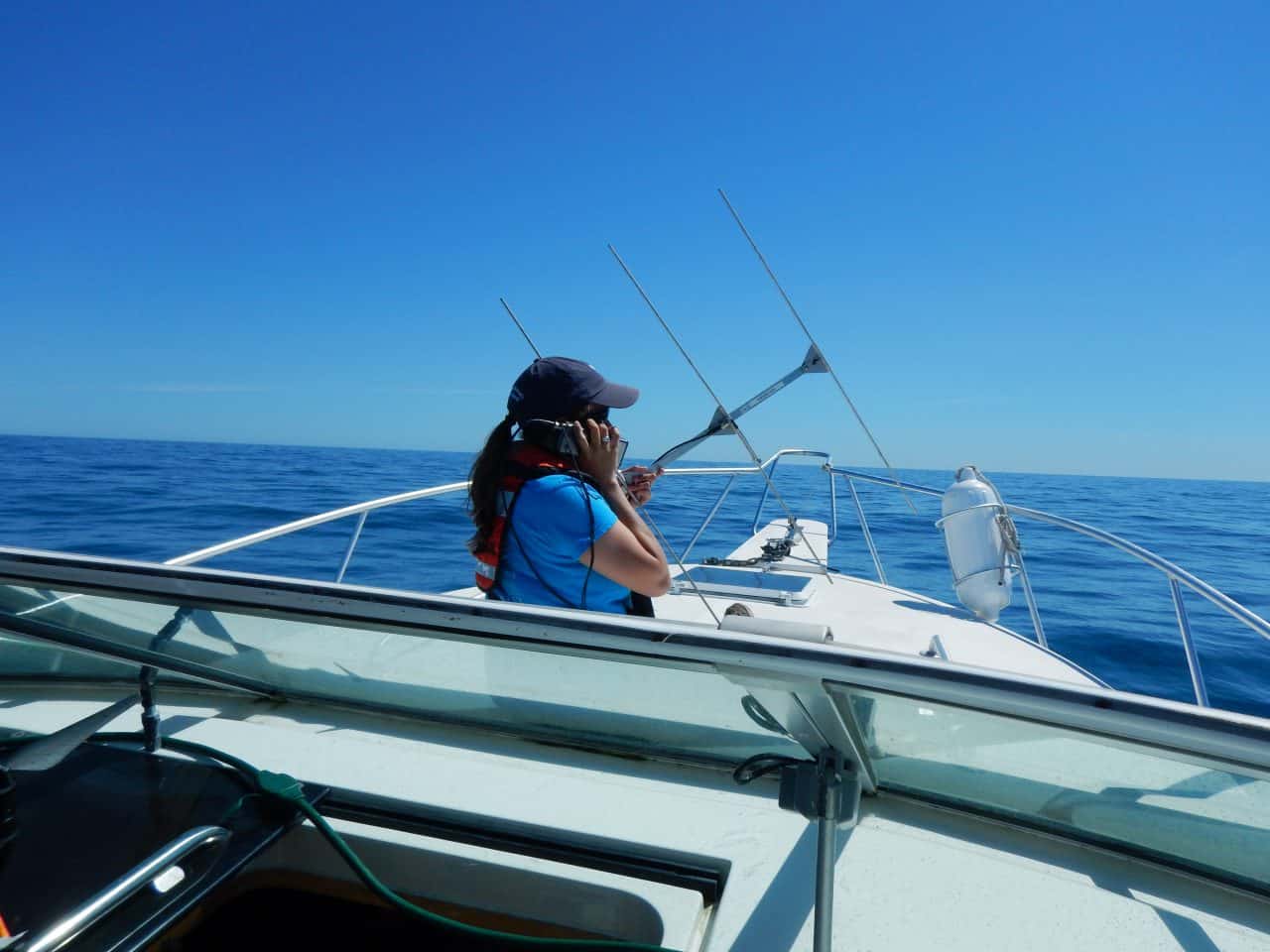 An hour later, after precise directional instructions from Mike and Laura, we found the tag no more that 100 feet from the boat — no small feat if you look at the photos.  All you can see when the tag is in the water are two small antennae poking out of the ocean. 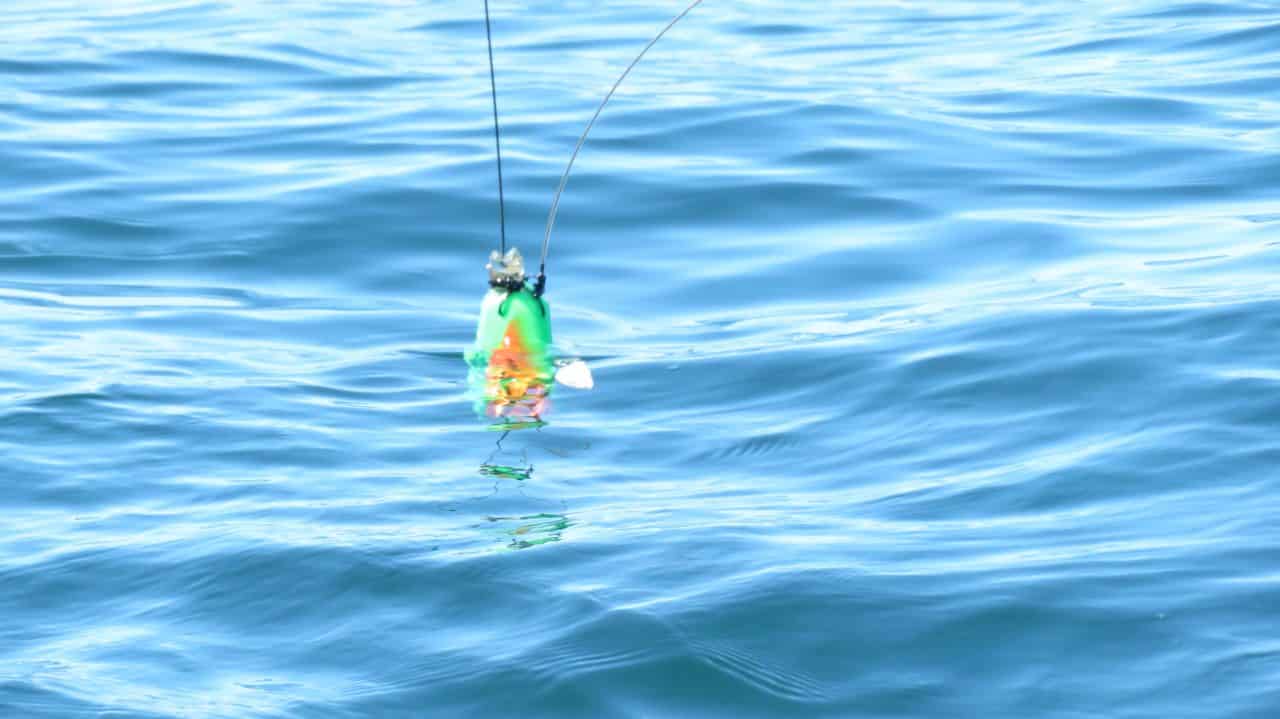 Tag recovered, the next job was photogrammetry; the goal was to try and conduct body length measurements of the animals that the NOAA team had previously tagged and Laura had ID’d. We quickly came upon a group of animals that Laura knew, and we put our brand new DJI Inspire 2 (bought for this expedition) into the air.  We had problems right out of the gate: every time we tried to take a photo or video, the FPV video screen would seize up. We brought the drone back in to troubleshoot.  Thankfully, the issue was not with the LiDAR sensor (which allows us to do photogrammetry), but with the new drone.  We were able to transfer the tech to our old faithful Inspire 2 and take off again. It worked great. Getting the photogrammetry images was more of a challenge that I expected; the animals were very active, so rarely were they straight in the water, and with a lot of glare from the water it was hard to see the full body from rostrum to tail.  That said, as you can see from the attached photo, we got the goods!!

I have long been interested in seeing if we could measure the body temperature of a whale by looking down the blowhole, so our next mission was flying our FLIRBot — every part of this was a learning process. While we did get our first set of blowhole temperatures for a humpback whale, we are now talking with David Lee at FLIR about how to best calibrate the data we are receiving from inside the whales blow hole (I’ll be writing a full blog on this later).

We are also interested to see if we can get temperature readings of scars and potentially entangled animals, so we can judge severity of wounds/entanglement. Last but not least we loaned the NOAA team our FLIR Vue Pro for an upcoming bird survey, not knowing if birds could be seen on FLIR, but we saw lots of birds flying through our frame so fingers crossed. Thank you again to FLIR for supporting this work!
The time was now approx 3:00 pm, and Britta said “Let’s collect snot.” So we started up the Parley SnotBot, and on our first flight of the day we got a good sample — I think that the NOAA team were impressed. During a wildlife bonanza over the next two hours (humpback whales surrounding our boat, fin whales, seals, shearwaters and sooty terns) we managed to get four more samples.

At around 5:00 pm we linked up with the NOAA vessel Auk, and Dave asked if we could try to get some aerial footage of the tagging process. This was going to be a challenge, as it can take a while for the tagging team to get into the best position to do the work, and we would have to have a drone in the air at that time.  Once again, the whale (or drone) gods were on our side, and we got a spectacular sequence from beginning to end.  The time now was just after 6:00 pm and the winds had picked up, gusting to 15 knots, so we decided to head back to port — amazed by all that we had achieved in one day:
Found and retrieved a $12,000 tag.

And all of that in one day! To say that the OA and NOAA team were happy would be an understatement.
The next morning, we were up early to get back to Gloucester before the bad weather hit, feeling happy not only with the data we collected and the new people we had introduced to our work but also the training that the new Parley SnotBot team received.  Thanks to Parley for continuing to support our work. Well done all!!
As the summer progresses we hope to spend at least another 10 days on Stellwagen Bank.
Onwards. Upwards.
Iain