SnotBot Azores: What a trip! 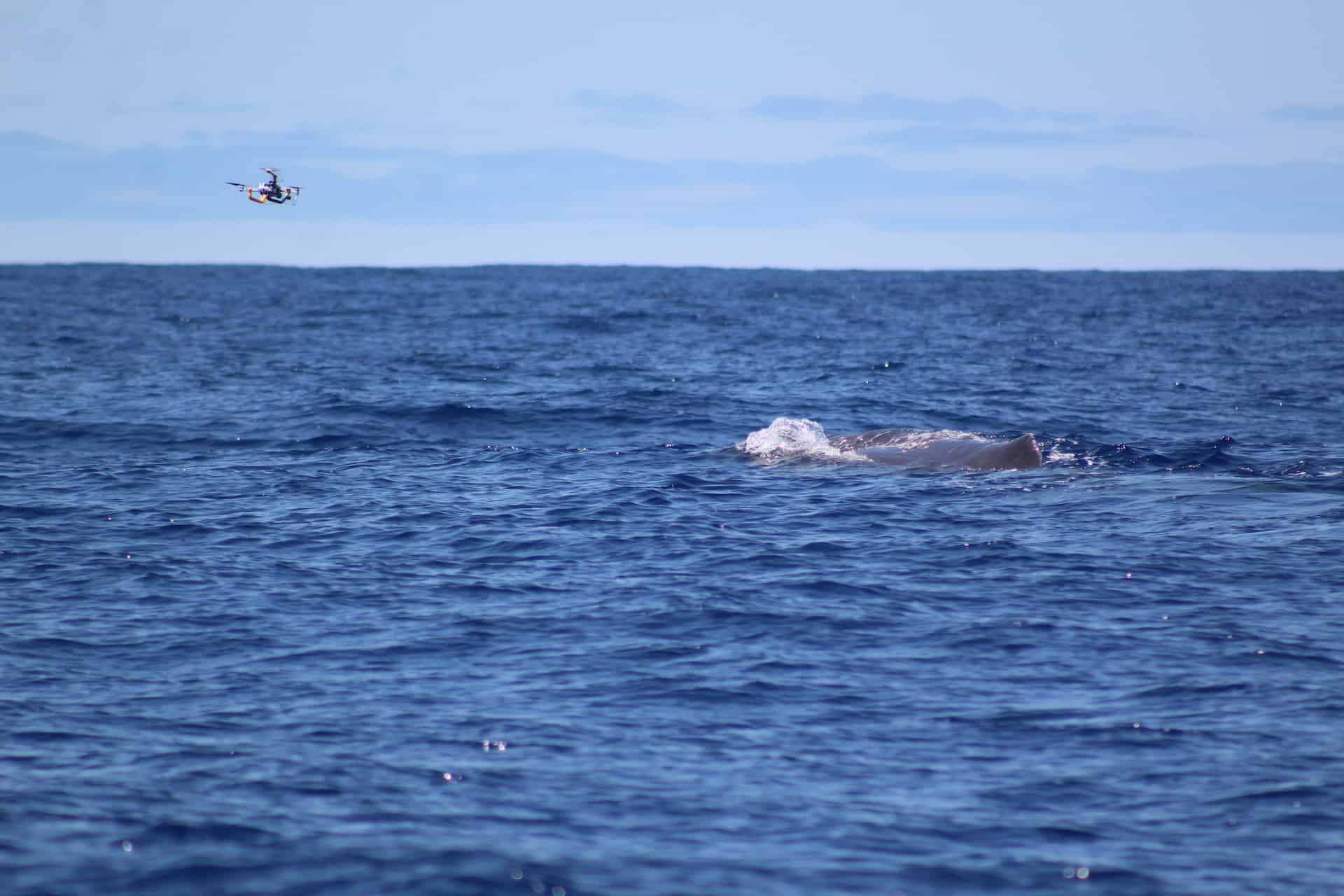 We are all safely back in Gloucester and it’s great to be back home with family and friends. While it is still a bit early to be looking back, we can say that this fifteenth SnotBot expedition was clearly very special and more diverse than any we have conducted previously.

It turns out that at the same time as our expedition was unfolding in the Azores The Explorers Club was hosting the Global Exploration Portugal Summit or GLEX Summit, through our friends at Parley they heard that we were doing research in the Azores and the next thing you know I was on a panel entitled Next Gen Platforms for Cetacean Field Research – State of the Art Innovations.  I recorded my 5 minute talk (at the end of a long day), but thanks to the great footage that we had already shot in the Azores and great editing by Chris the final result was OK. Should you be so inclined you can watch it here: https://www.dropbox.com/s/5ct0z3tdg6od840/SnotBot%20x%20Parley%20Azores%20GLEX%202021%20final.mp4?dl=0

Day 11 was blowing like crazy so another day ashore was on the books. We spent the morning working on equipment, backing up and organizing data and prepping for the race to the finish (only two days left). In the afternoon we all went for a Snorkel, I was a bit paranoid about Jellyfish as one of the OceanX film team got badly stung the day before but it was great to get into the water and it was a fun snorkel. 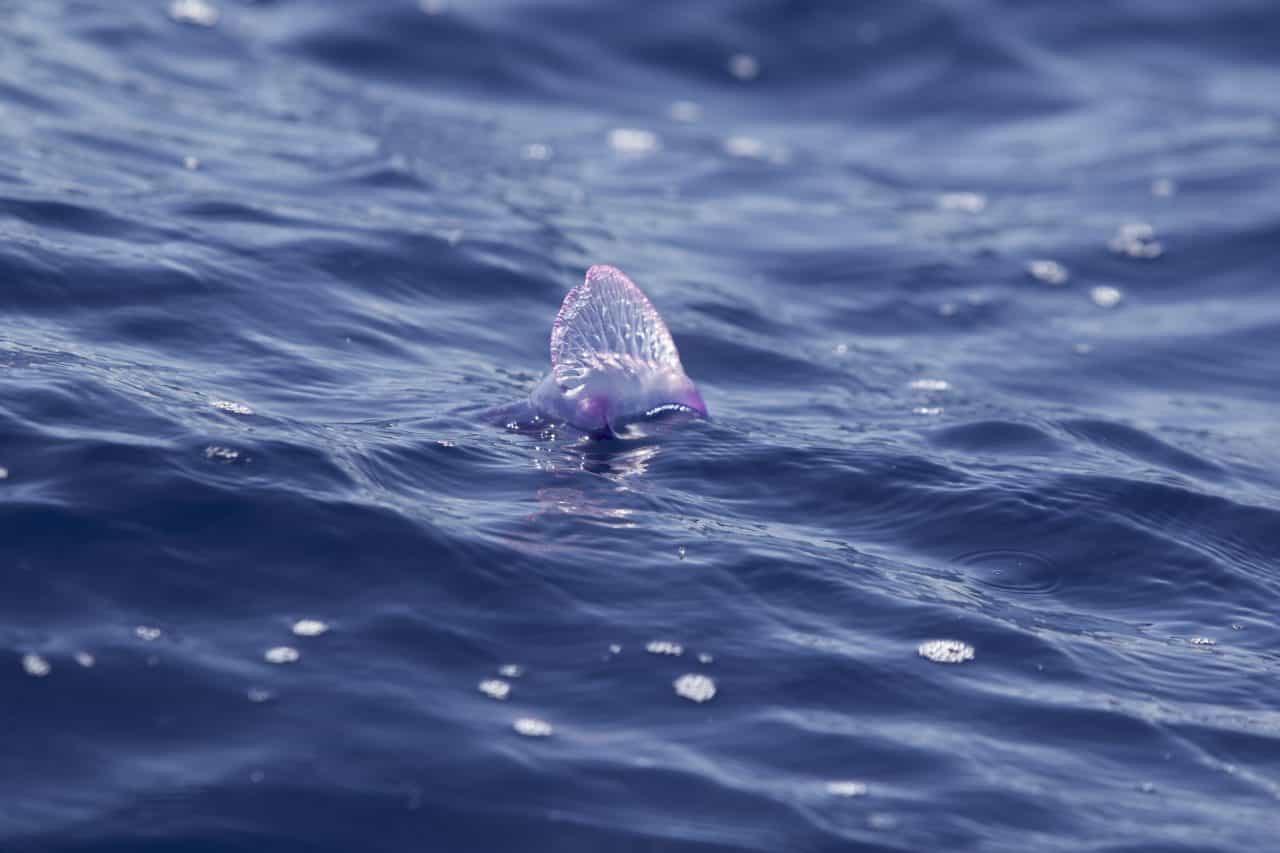 The next day we did see a number of Portuguese Man of war Jellyfish (photo). We also tested a small ROV (photo) that had been leant to Andre and then visited another whaling museum. This museum has a lot of the massive old industrial equipment still in place, from boilers to winches and steam switches – they were as impressive as they were sad (photo).

On day 12 we were on the docks by 6:15 and heading out into the Atlantic by 6:30 as the winds were projected to pick up later in the day, Daniela from Parley joined us along with Patrícia Carvalho a Journalist and Nuno Ferreira Santos a cameraman from the Portuguese Newspaper Publico. Alas high winds and waves were on us almost immediately so it was not to be, we did not see or hear a whale and the weather conditions degraded rapidly as the morning went on so after only about four hours at sea we were back in port. Patricia and Nuno were very understanding and we did of course have our live education session with kids from around the globe planned for the afternoon, so not all was lost. Here is a link to the Publico story:

As a reminder we expanded on our education efforts during this expedition, with the support of Parley we reached out to a lot of kids and schools before the expedition started and sent them one of Christian Miller’s videos from a Baja Expedition as an introduction to the SnotBot program. We then asked kids (from around the Globe) to send us questions and every day as the expedition unfolded we answered three questions a day through short video blogs, you can see the daily answers here: https://drive.google.com/drive/u/1/folders/1QUCY6D1jxQ3PCSVN6FoLj4N1Aj507a5l

Working with the amazing Parley Education team we then planned an online live Zoom event for the penultimate day of the expedition to answer more questions and link the kids directly to the expedition team.  The live Zoom call was fantastic, kids joined this call from the Azores and Lisbon, South Africa, Bali, Australia and Gloucester MA! The kids questions were typically amazing and I think that a good time was had by all (photo). 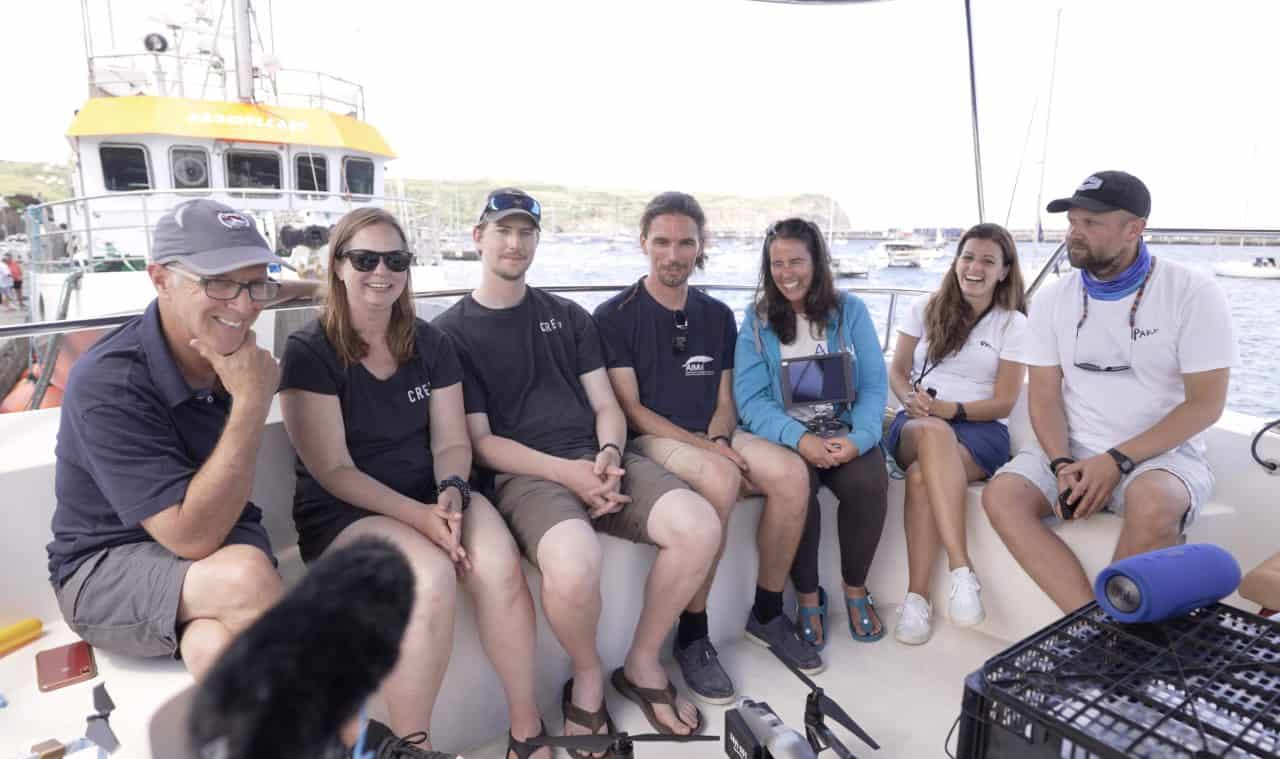 When I suggested to the kids that we needed volunteers to jump into whale poo to collect squid beaks a lot of hands went up. The goal here was to try and engage kids with researchers on an authentic research expedition and I think that working with Parley we hit the ball out of the ballpark! We hope now to make this a regular feature of our expeditions. Parley are putting together a short video on this expedition with a focus on the education outreach and at a later date I will send you a link to that and a link to some of the other videos I have referenced during this expedition like the sperm whale playing with plastic.

Here is one of the many responses we heard from the kids: Alice: “I learned about other whale species that I didn’t know, I thought the drone technique was really cool and I didn’t know anything about the project so I enjoyed learning.”

We did not book Norberto’s boat for day 13 (the last day of the expedition) because we thought that we would need a day off. Bad weather had given us our days off so we had to get back out on the water on day 13.  Alas Norberto’s boat was not available because… Sylvia Earle was going to use it – WHAT! This is one of those strange situations that you could not plan for, it turned out that Sylvia was also visiting the Azores as part of her Mission Blue Hope Spots project.  “I wish you would use all means at your disposal – films, expeditions, the web, new submarines, campaigns – to ignite public support for a global network of marine protected areas, Hope Spots large enough to save and restore the ocean, the blue heart of the planet.” – Dr. Sylvia Earle

So for the last day we all jumped into a big inflatable (photo) found whales quite close to shore and the next thing we knew Sylvia and her team (photo) were there filming sperm whales and us as we collected samples – what are the chances of that? That night Sylvia gave a talk in town (that we all attended) she mentioned SnotBot in her talk and we managed to get a SnotBot team shot with her after the talk (photo). 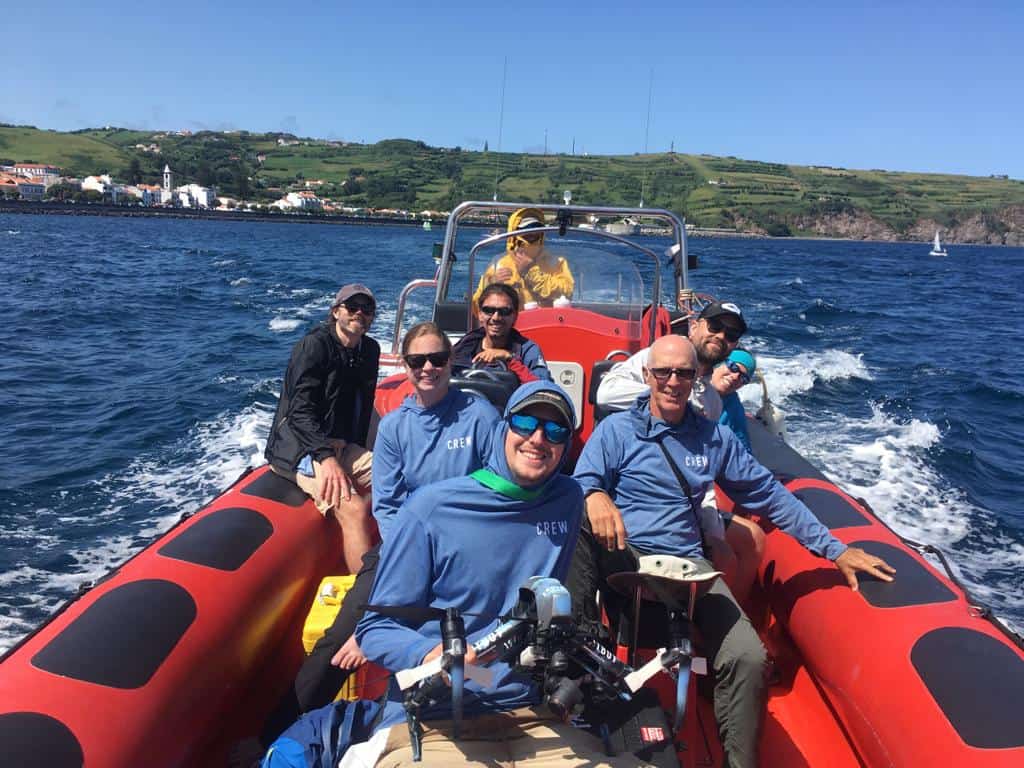 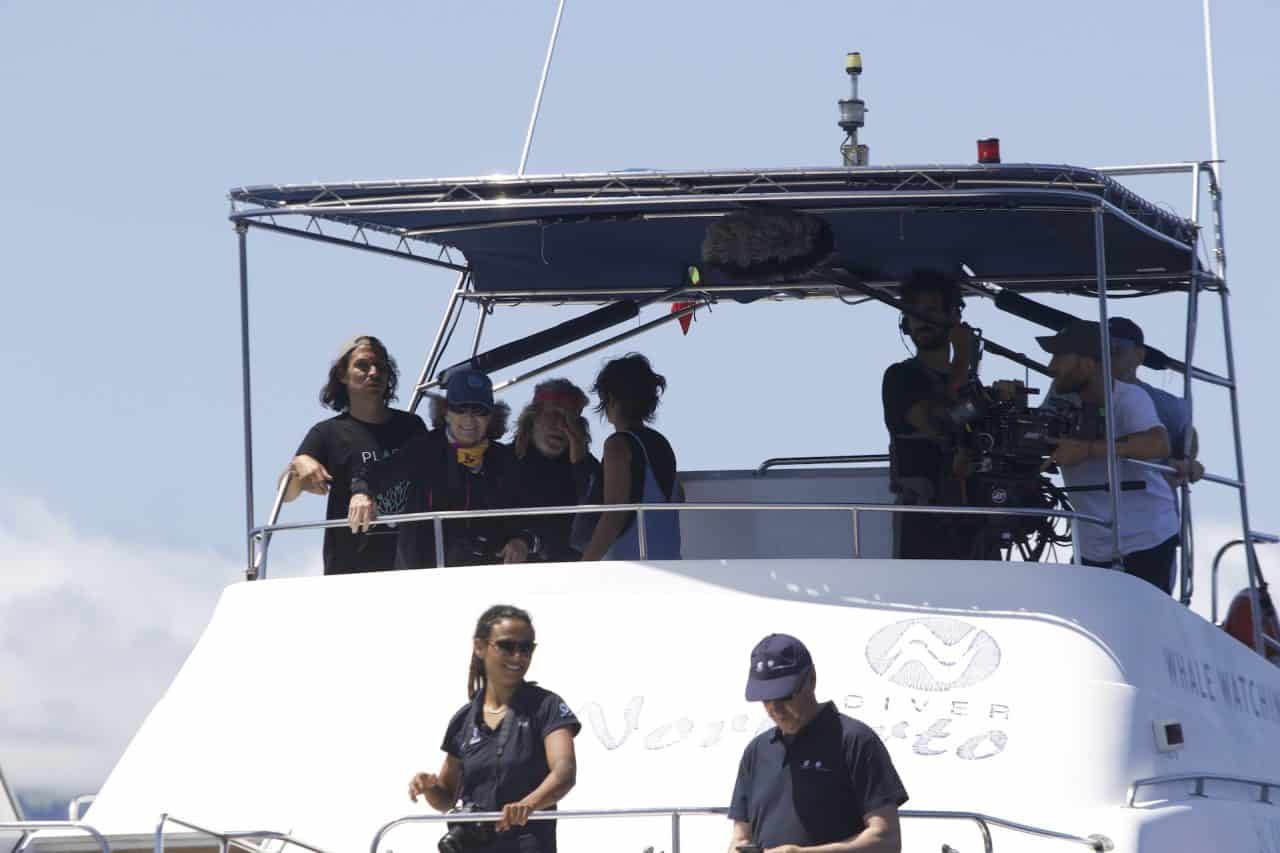 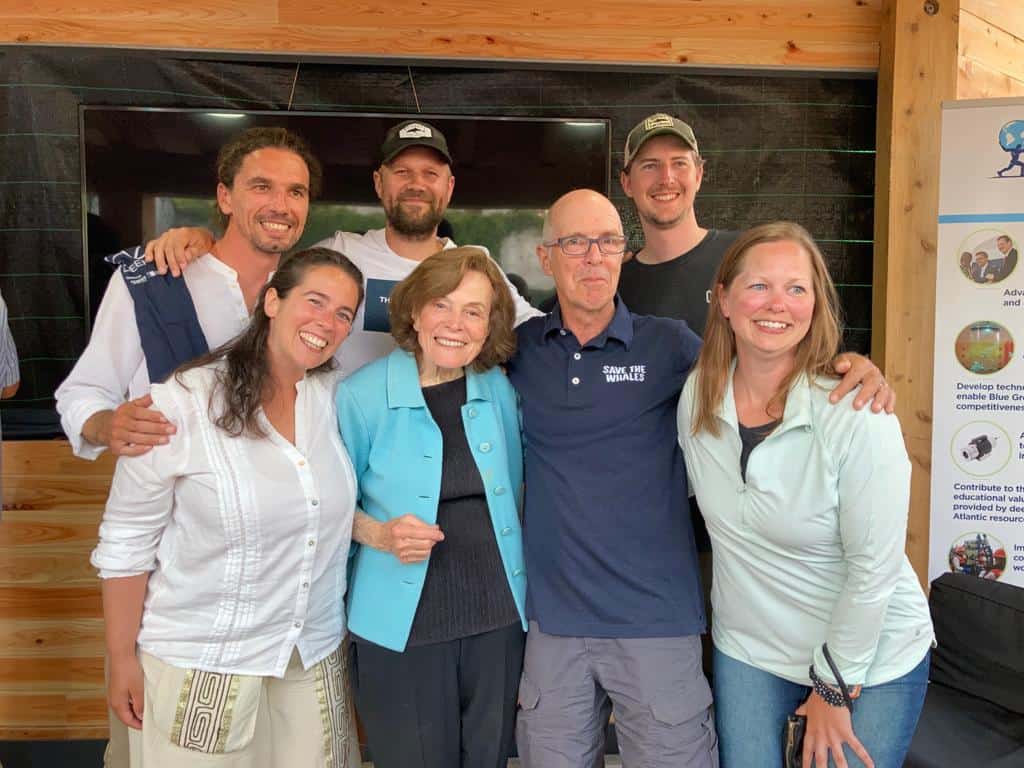 Working from the inflatable was certainly harder than the larger boat but while we had fairly big swells the previously choppy sea conditions had calmed down a bit. We had a good day collecting a total of 12 samples, some with the Mavic Pro (photo). 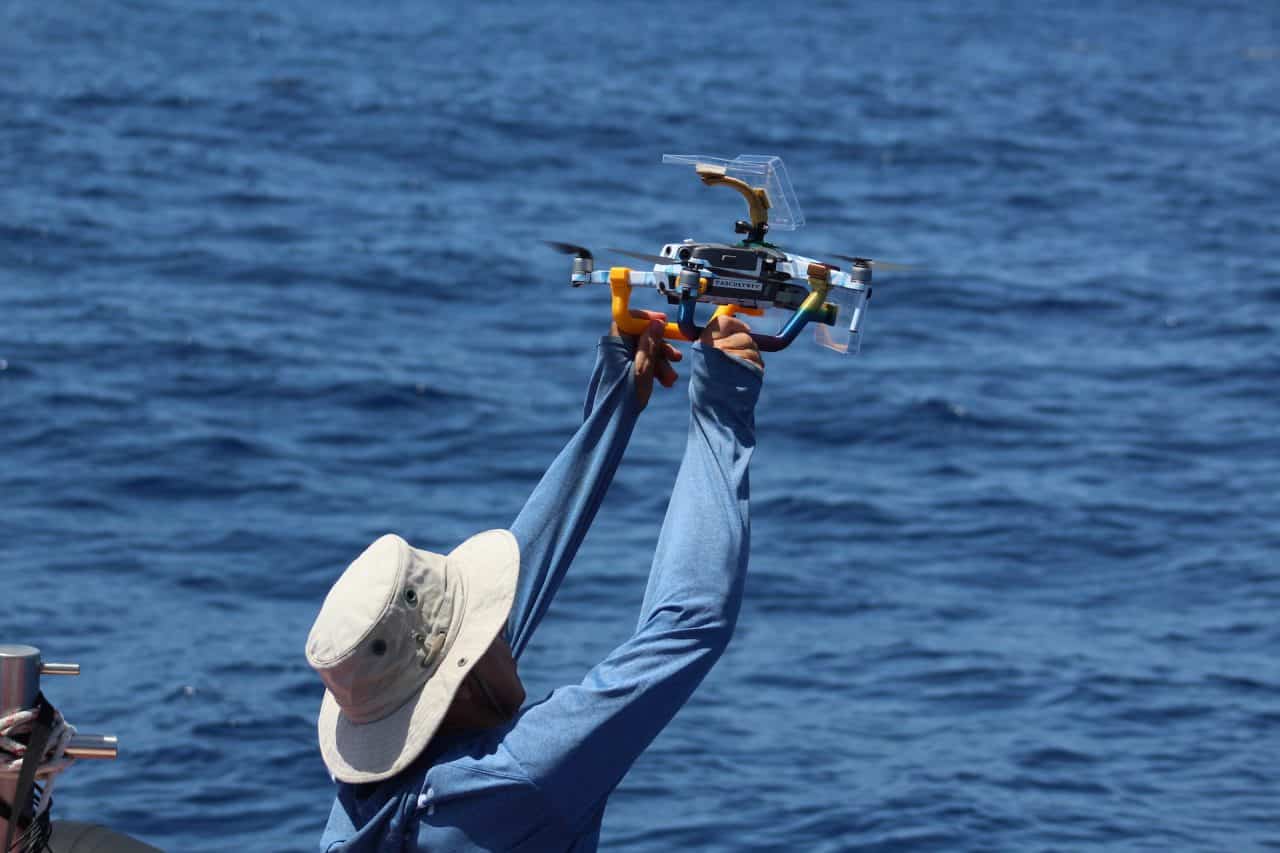 One of the highlights of the day was on the way back when we came across some Risso’s dolphins. Risso’s are a fascinating species, about ten feet long when fully grown they look more like a pilot whale than a typical dolphin and are born a greyish color which turns to white as they age (photo). 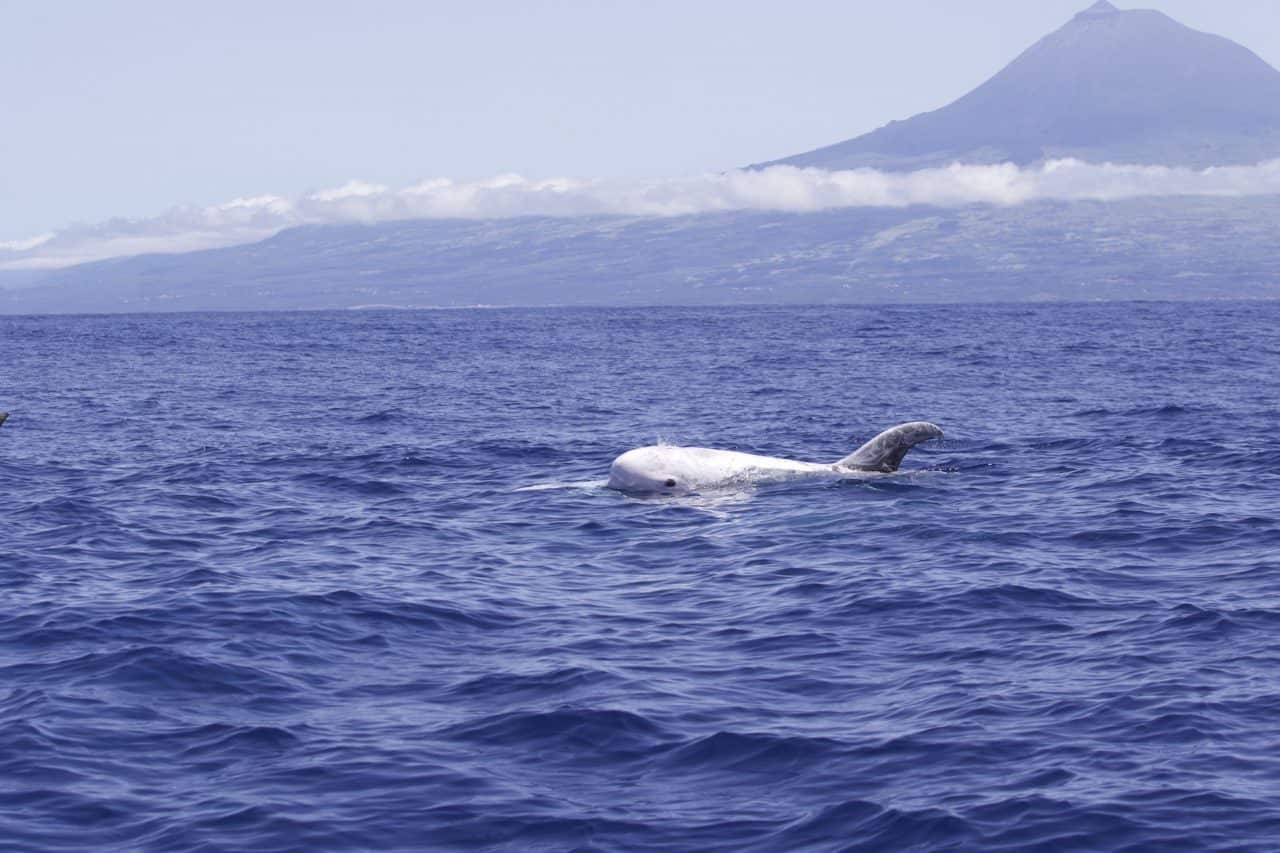 The scars on their bodies are teeth marks from mating conflicts. Our excitement turned to concern when we saw what might have been a plastic rope on a dorsal fin (photo). 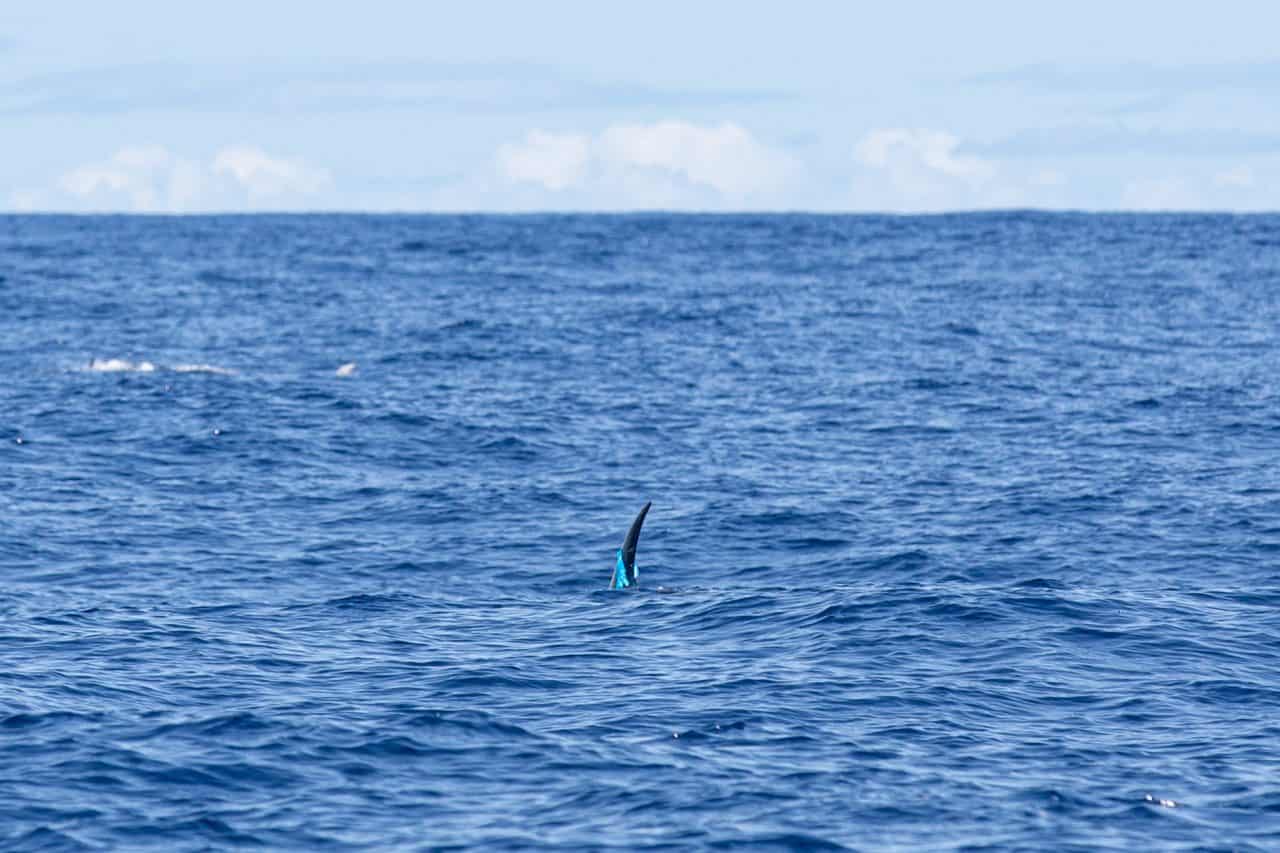 As you are aware we had already seen too many plastic encounters on this expedition so we quickly got a drone up to look for a possibly entangled animal. The good news to report is that the animal once again was playing with plastic (playing with fire) and was not entangled. With smiles on our faces after a great interaction with these whales we headed back into town.

Breaking it down then, we had 6 successful SnotBot days at sea, on 3 other days we went out but the weather had us back in port by lunchtime with no data, on one bad weather day we shot B roll with the OceanX film team and another bad weather morning Andy and I shot interviews with OceanX. We took one formal day off and toured the Island of Pico (visited a whaling museum etc) with our new best friend Noberto, who took us to his home and cooked us a grand lunch.

Expedition 15 – SnotBot Azores has to have been the most ‘All Encompassing’ SnotBot expedition we have ever run. From OceanX and their film team, collaborating with Portuguese researches and friends Joana and Andre from AIMM, meeting with local researches from the University of the Azores. Presenting at the Explores Club Conference (GLEX) hosting a Portuguese Newspaper, and all of our interactions with kids from around the globe, it was quite the expedition. While the weather was not as good as we hoped for the time ashore gave us the opportunity to make new friends and build new partnerships. This was my first trip to the Azores and I was enchanted with both the islands and the people. On the last day we had a credit card problem with a lady who had been making us our sandwiches, she said “não se preocupe está tudo bem” – “Don’t worry it’s OK” – just wire me the money when you get home. There was a generosity of spirit here that was great to be a part of. And let’s not forget SnotBot collected biological samples (and supporting meta data) from three new species of whales (for us): Sperm whales (63 samples) , Sei whales (2 samples) and Bryde’s whales (1 sample). So very successful expedition on ALL levels!

Mark Hayes kept things afloat here in Gloucester while we were gone, facilitating the construction of our new seawall (photo), renting out the docks and generally keeping things in order. 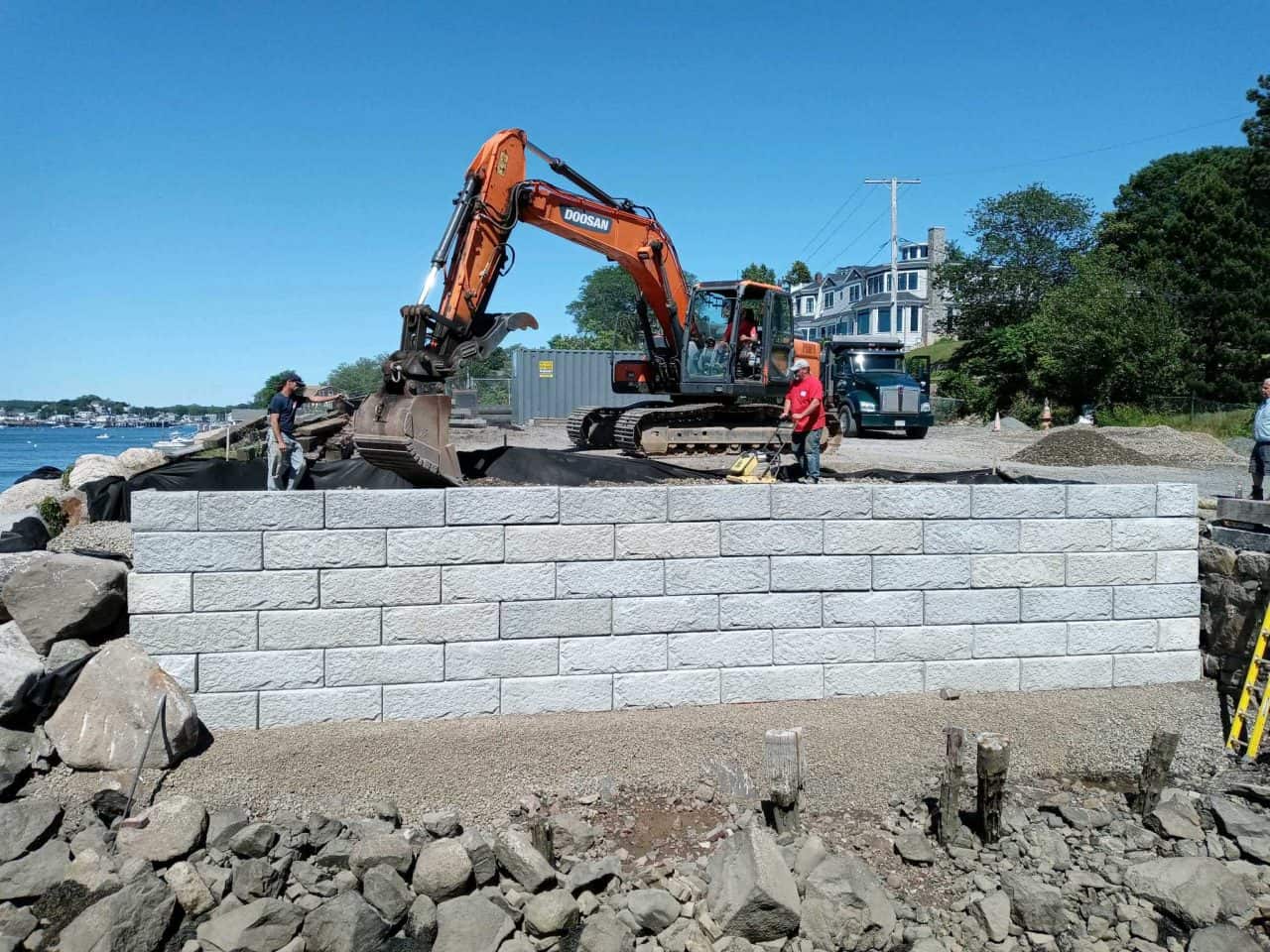 Last but not least a very nice story came out in a magazine called Concrete Décor – on our restored concrete floors: https://www.concretedecor.net/departments/stamping-texturing-concrete/custom-made-stencils-for-concrete-floors/

With COVID concerns still prevalent we are not planning another international SnotBot expedition this year, that said we will be working with humpback whales off Gloucester for the rest of the summer and testing our fixed wing drone and other drone platforms and a sensors – otherwise as my sister Pat once said:  Life is an Adventure, here’s to the next one!

Wishing you fair winds and a following sea.