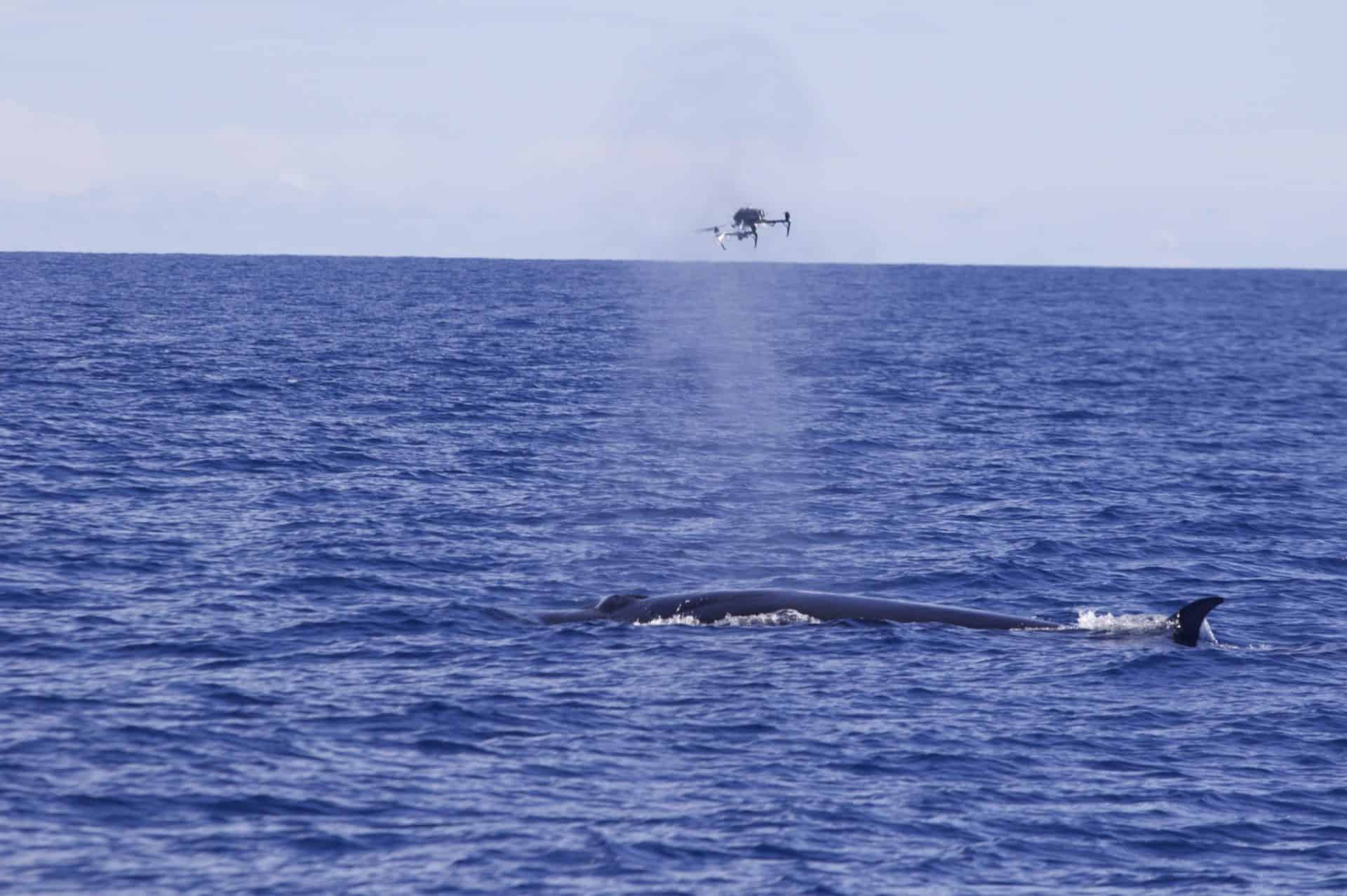 The good news to report is neither the work nor the stories are slowing down. On both days two and three we passed the OceanX research vessel OceanXplorer as we headed out to the whales; considering that OceanX are the primary sponsor for this expedition it was fun to meet them out on the water. 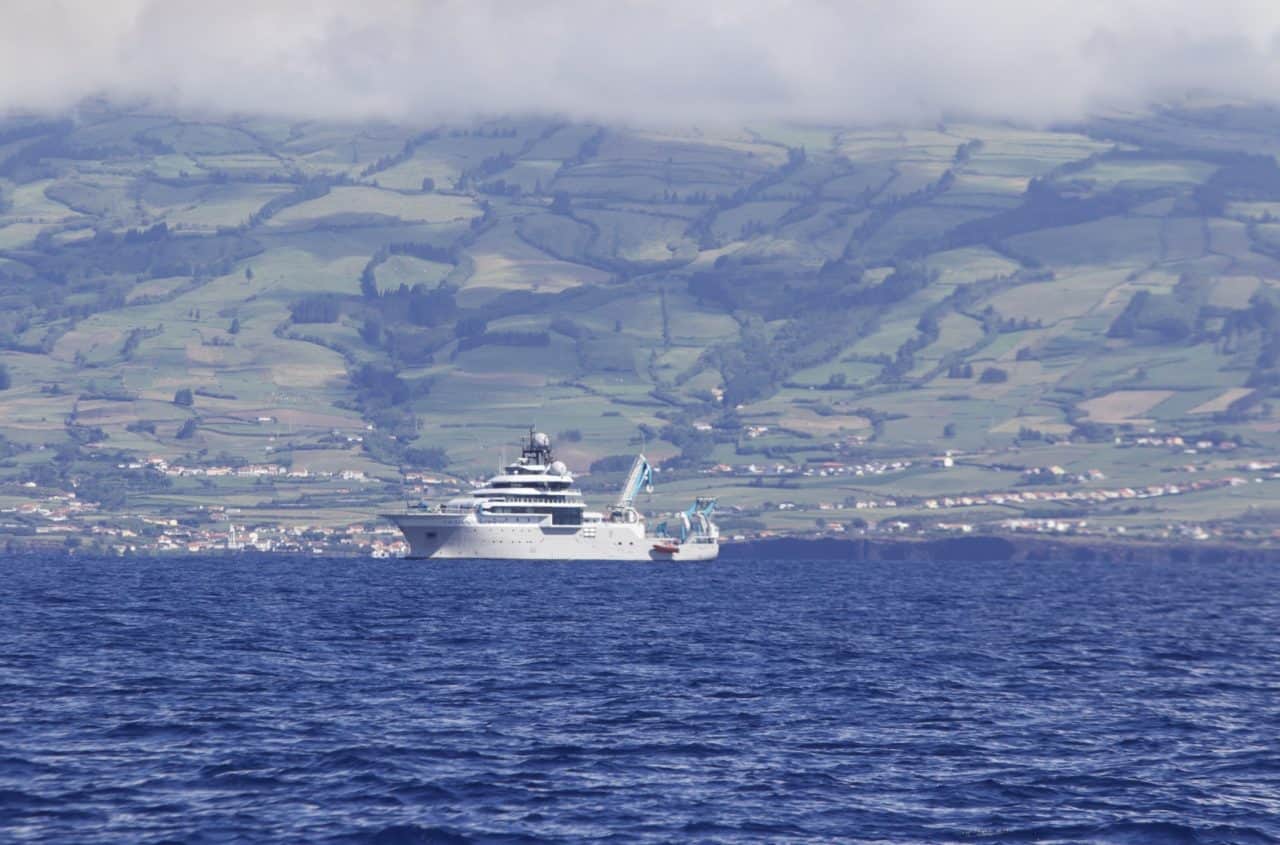 We did connect with our friend Mattie Rodrigue (Science Program Lead, OceanX) who was onboard, and she said that they were working with a whale fall (this is a carcass or just bones of a dead whale on the ocean floor). They sent one of their ROV’s down to collect some whale fall parts and were looking at the worms and other critters that were feeding off the bones. This reminds me of the recent International Monetary Fund story on the value of whales for carbon sequestration and as nitrogen pumps: Natures solution to Climate change.

Typically deciding where to go to find whales is a real challenge. This is another way in which the Azores has been a fantastic location: the whale watch companies pay for a number of spotters to sit on the cliffs to look for whales and direct the whale watch boats to them. The owner/captain of our boat, Noberto, said that the spotter we were using was one of the oldest (70+) and most experienced in the islands, and he used to be a spotter for commercial whalers (whaling has been banned here since 1987). On a bad weather day when it is too rough for us to go out on the water, we hope to meet this guide and learn more about his experiences and if and how the oceans and whales have changed during his time as a spotter.

So after passing the OceanXplorer yesterday, a lookout on the cliffs radioed our boat to say that they thought they saw a big male sperm whale, big males are a priceless data set for us since there are thought to be far less male sperm whales than there are females (another long story on how a large percentage of male sperm whales were killed during the peak of the whaling industry). Alas the big male turned out to be an anticlimactic story, before we got a drone close the whale dove and Noberto and his team said that the whale could be down for an hour and a half or more, so with great disappointment we headed back to an  area with a larger density of sperm whales.

As nature takes it also gives; en-route to find more sperm whales saw a sei whale! The sei whale is the third-largest baleen whale after the blue and the fin whale. We have a group of well-travelled scientists on our team and none of them had seen a sei whale before. With Chris flying (top photo) we soon had a sei snot sample in our freezer, so we have added two new species (sperm and Sei) to our list of species that SnotBot has sampled, not a bad start for day two.

Working with the whales on day two was definitely harder than day one, on day one I think that the whales were single-mindedly focused on feeding, so when they came to the surface they were breathing hard for a long time and then back down. On day two we encountered more social groups and mothers and calves. This then seemed like a good day to try out a new SnotBot drone format. SnotBot® is a modified DJI Inspire 2 drone, it is a midsize drone and we have long wondered if we could use a smaller drone. So after collecting 8 samples on day two we switched over to the smaller Mavic Pro SnotBot. Chris had 3D printed catch handles and arms to hold the Petri dishes. We wanted to test the Mavic Pro because a smaller drone is easier to transport and costs less, alas I struggled with the smaller drone (and it only has 4 as against the Inspire 2’s 6 Petri dishes) so we went back to flying the Inspire 2 for day 2 and 3, I am sure that we will test the Mavic Pro again. 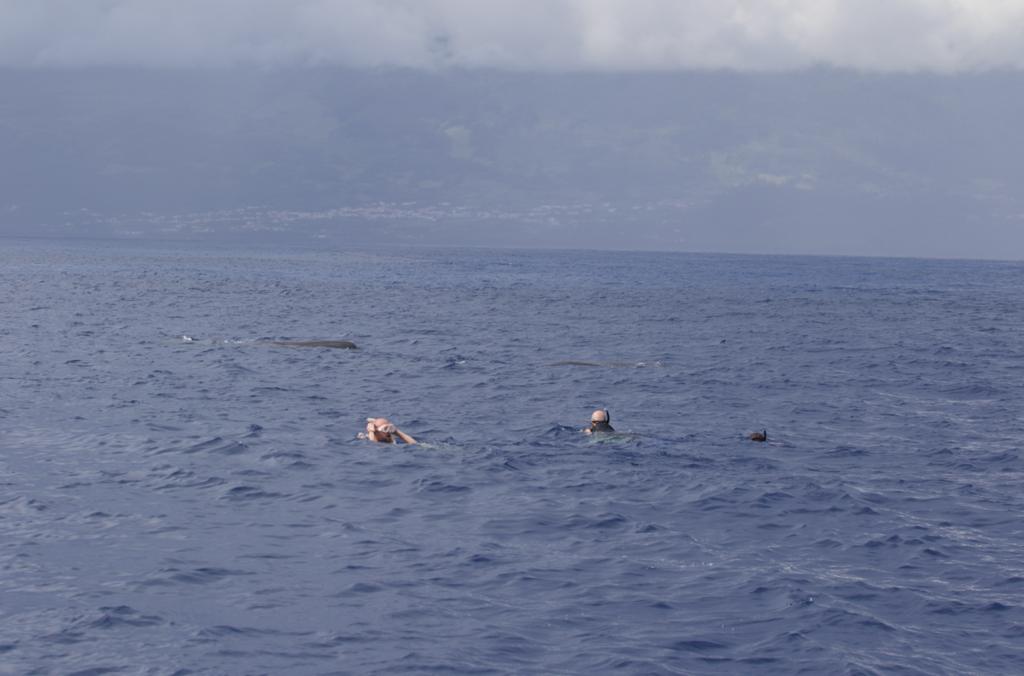 Late afternoon we did try getting in the water with sperm whales (above) – unlike the NPR story I was quoted in recently, sperm whales could swallow a human, but alas we did not get close enough to see a mouth let alone a throat, even though it looks close in the Swim Day 1 photo.

Day three started off slowly, we went to a different location and did not get our first sample until after 11, but we then collected 9 samples in the next two hours – total bedlam, not just for the pilots and boat crew but also for Andy and the team who are processing samples.  By 2:00 pm things had calmed down a bit and I caught on film another disheartening sight. I saw quite a big sperm whale hanging vertically in the water checking out two pieces of plastic. It spent close to 4 minutes just exploring this floating garbage before swimming off. If there is one thing that I have been reminded of on this trip, it is how curious sperm whales are, and considering all of the garbage we discard into the oceans – this is not always good thing. In 2019 a sperm whale was found dead on a Scottish beach with 220 pounds of garbage filling its stomach. 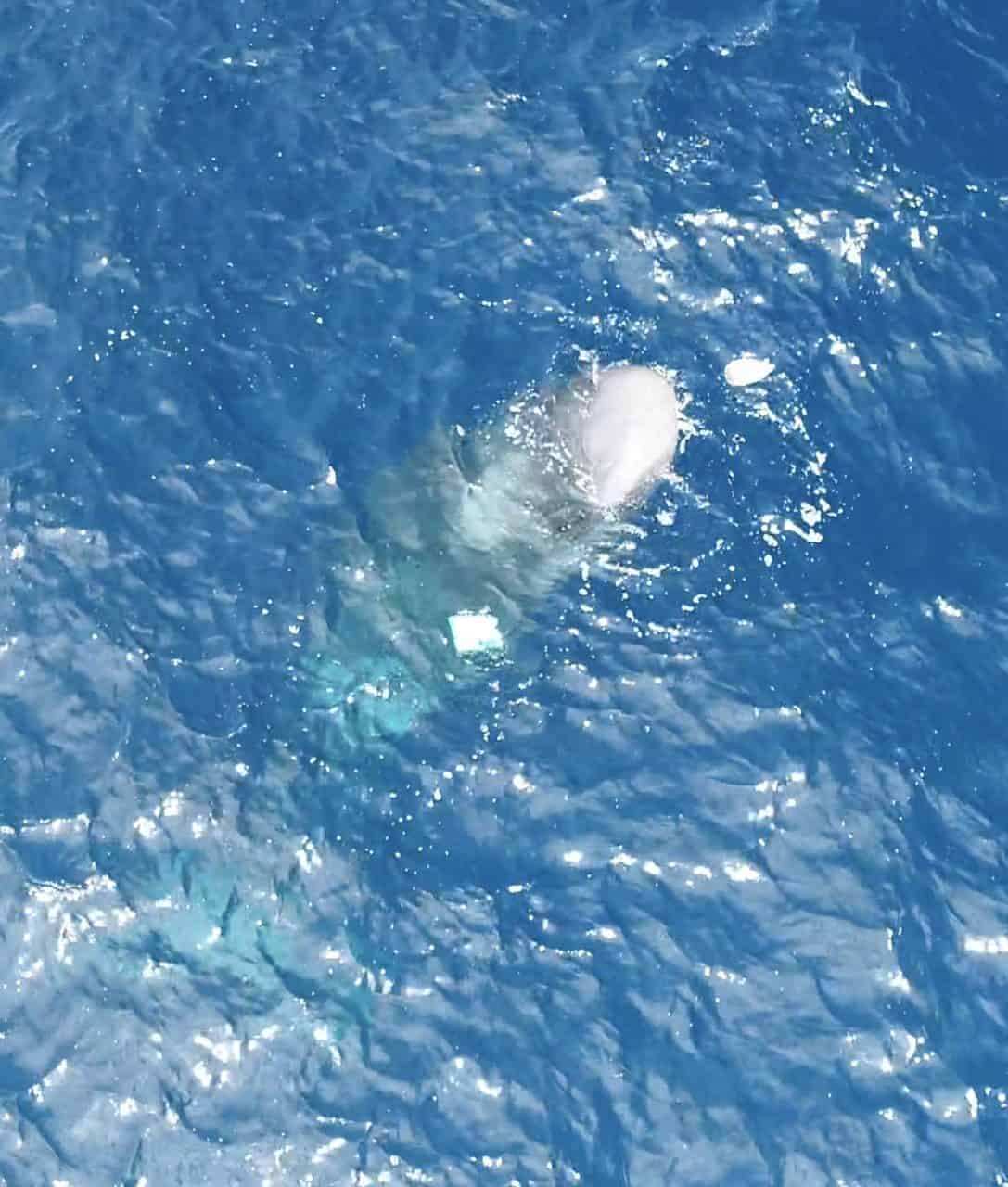 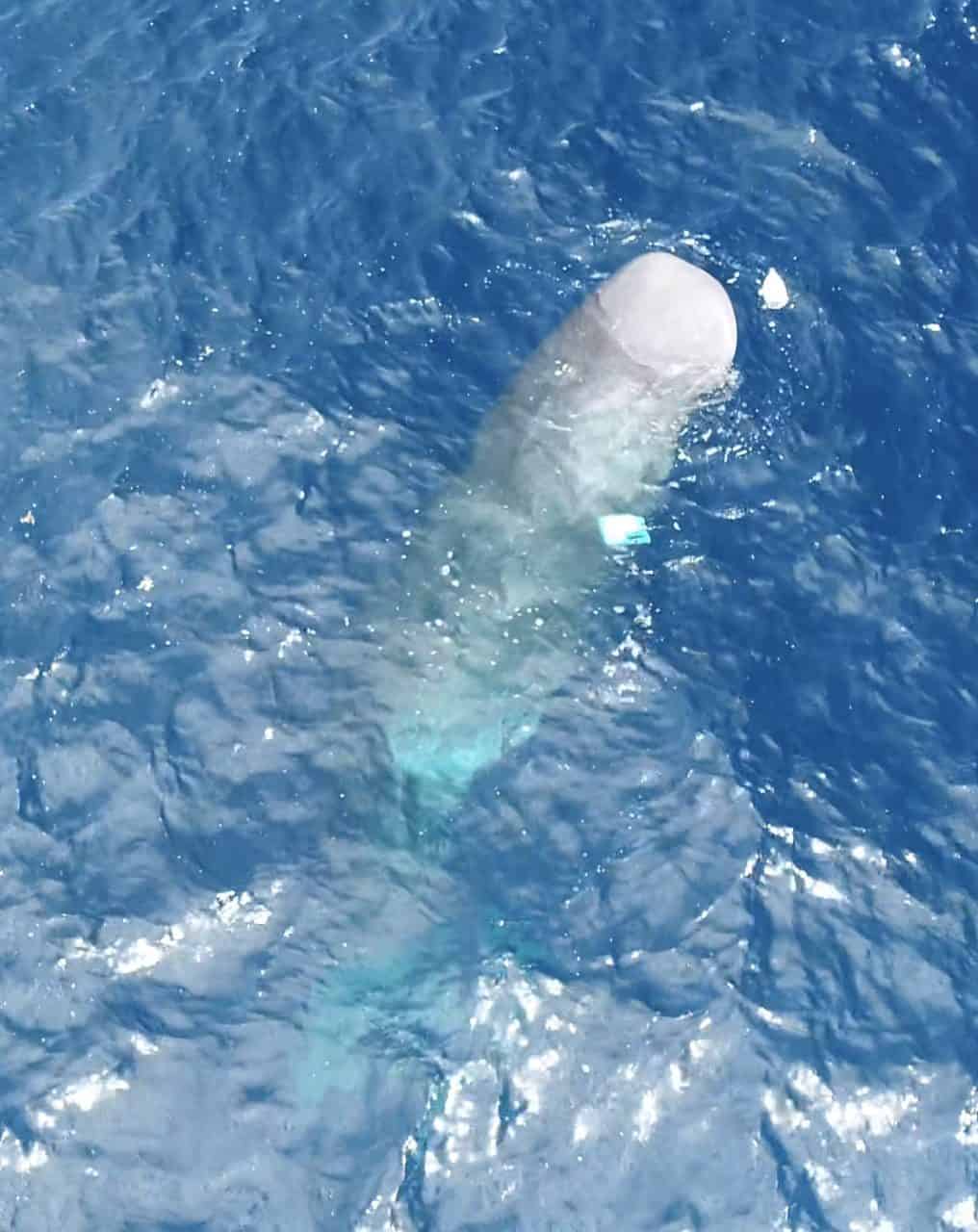 We successfully collected a total if 15 samples today, so the tally is, 11 on day one, 10 on day two and 15 today – so 36 far, which is pretty amazing. We did also make one more attempt to get in the water with sperm whales, to film, collect skin, feces etc but we failed miserably as you can see from Chris’s drone shot.

Tomorrow we are being joined for a couple of days by a film crew from OceanX which will be exciting, but bad weather has been forecast for Tuesday, Wednesday and Thursday this week – so who knows what the Azores has in store for us next.