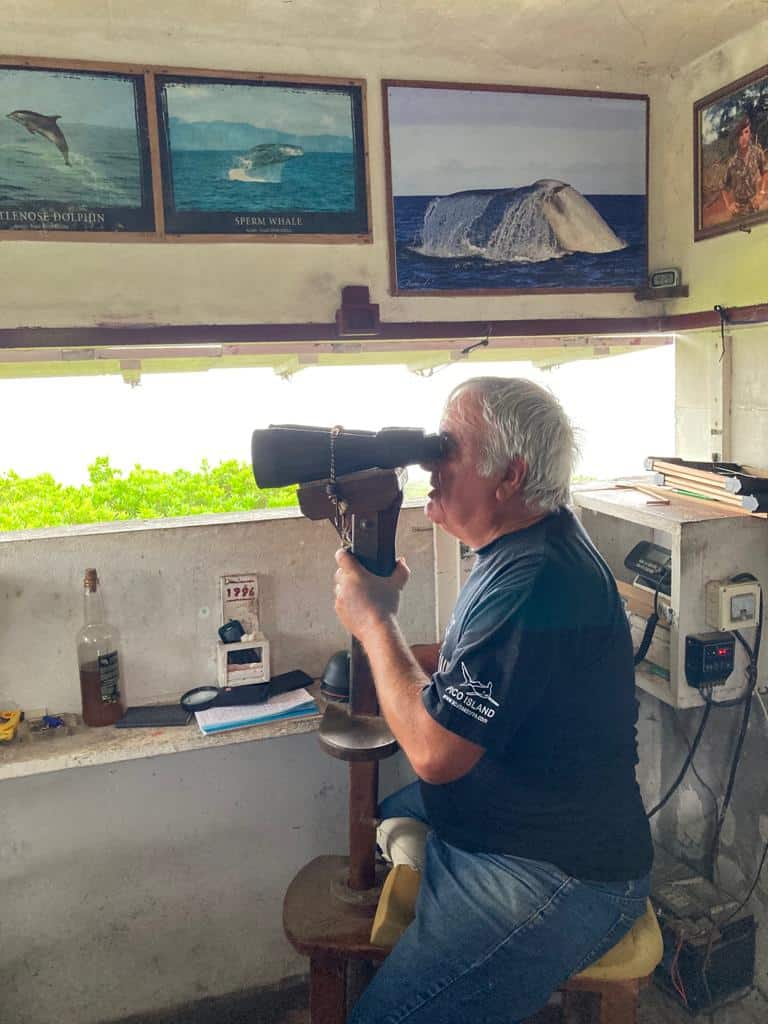 While the weather has been tough on us, we tried forcing it yesterday but it was just too rough, and the same today, so we planning a 6 am wake-up call tomorrow as there is meant to be calm winds tomorrow morning, fingers crossed.

One of our typical major expedition challenges – finding whales – has not been a problem in the Azores because we have had a lookout on shore spotting whales for us. Following is a blog and attached photos from Alicia on one of the oldest spotters in the Island of the Azores “Vigia” Antero, enjoy!

Whaling was a primary economic driver of the Azores in the mid 1800s through 1987. Whalers hunted sperm whales mostly for oil but also used the meat of the whales for sustenance. These whalers set out in small row boats armed with harpoons. The whalers depended on lookouts (vigias) stationed in stone watch towers on the cliffs around the islands. When sperm whales were sighted, they would signal to the whalers the location of the whales. These men became experts in the distribution and behavior of the whales. In 1982, Portugal supported the International Whaling Commission’s moratorium on commercial whaling and whaling stopped in the Azores. Just a few years later the Azores saw in increase in tourism and whale watching became a popular activity. The lookouts or vigias found themselves transferring their skills and knowledge to a new industry. 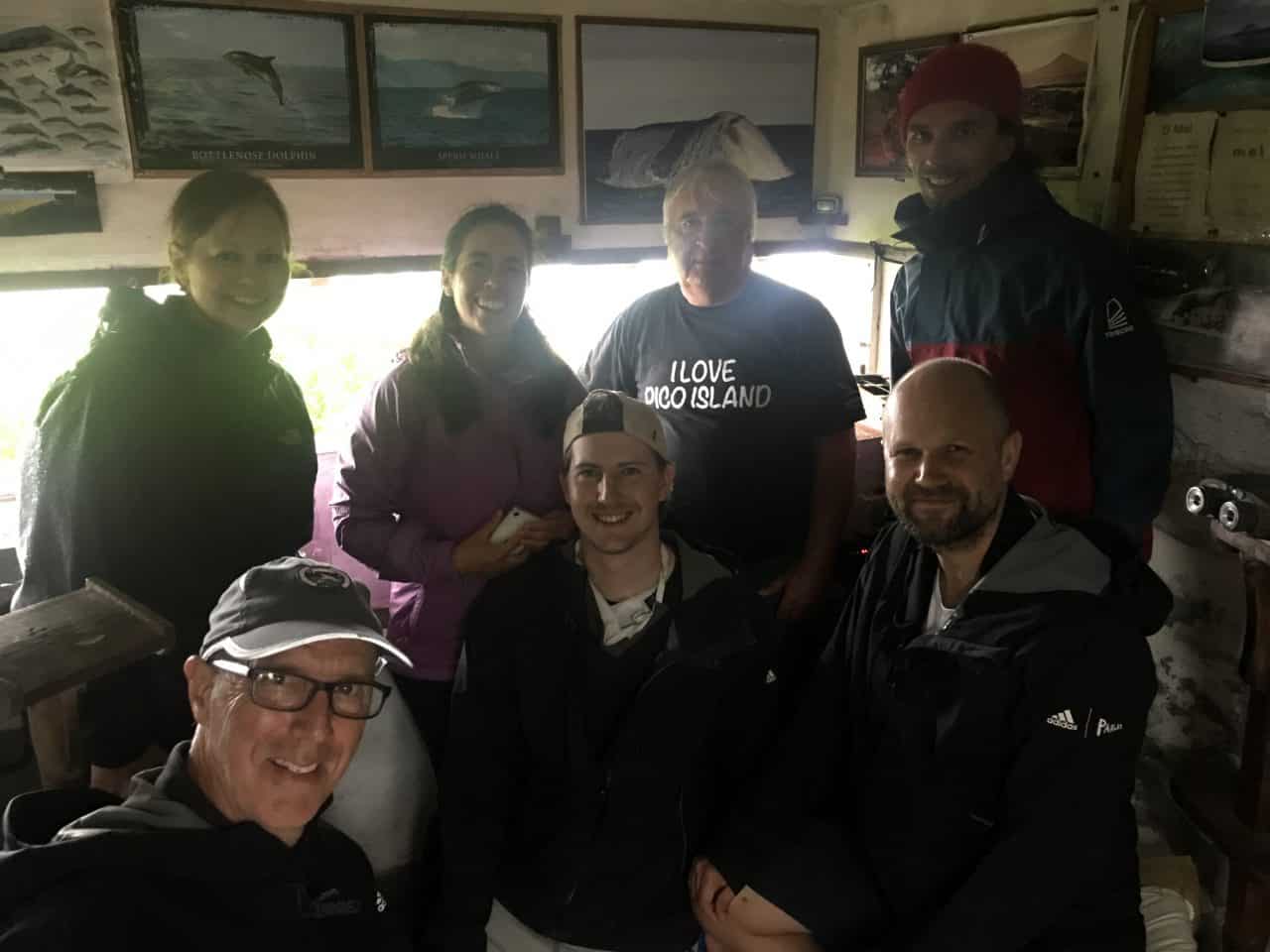 Throughout our expedition, our captain along with other whale watch boats use lookouts or vigias to guide us to the whales. The lookouts see the whales, estimate the distance and direction from the boat, radio to the captains to tell them how close they are to the whales. We of course still watch for blows on the surface to spot whales ourselves, but the additional perspective from the lookouts especially during rough conditions, has been helpful. The lookouts can even estimate when a whale dives when and where it will come up again.

We met with Vigia Antero (top)at his lookout on the Island of Pico and he spoke with us and shared stories about his first time as a lookout and his work now (above). As a child, Antero would bring his uncle warm meals at the lookout. He learned the lookout trade from his uncle and later became a lookout for whalers. Once whaling stopped he tried to work as a tuna fisherman but that didn’t interest him. He still needed to provide for his family he began as a lookout for whale watches in 1996.

In 1996, he saw finback whales on his first sighting (actually Sei whales, but at that time they called whales with a large dorsals finbacks). He shared that another time he successfully directed a boat to a whale location where a whale breached right next to the boat. 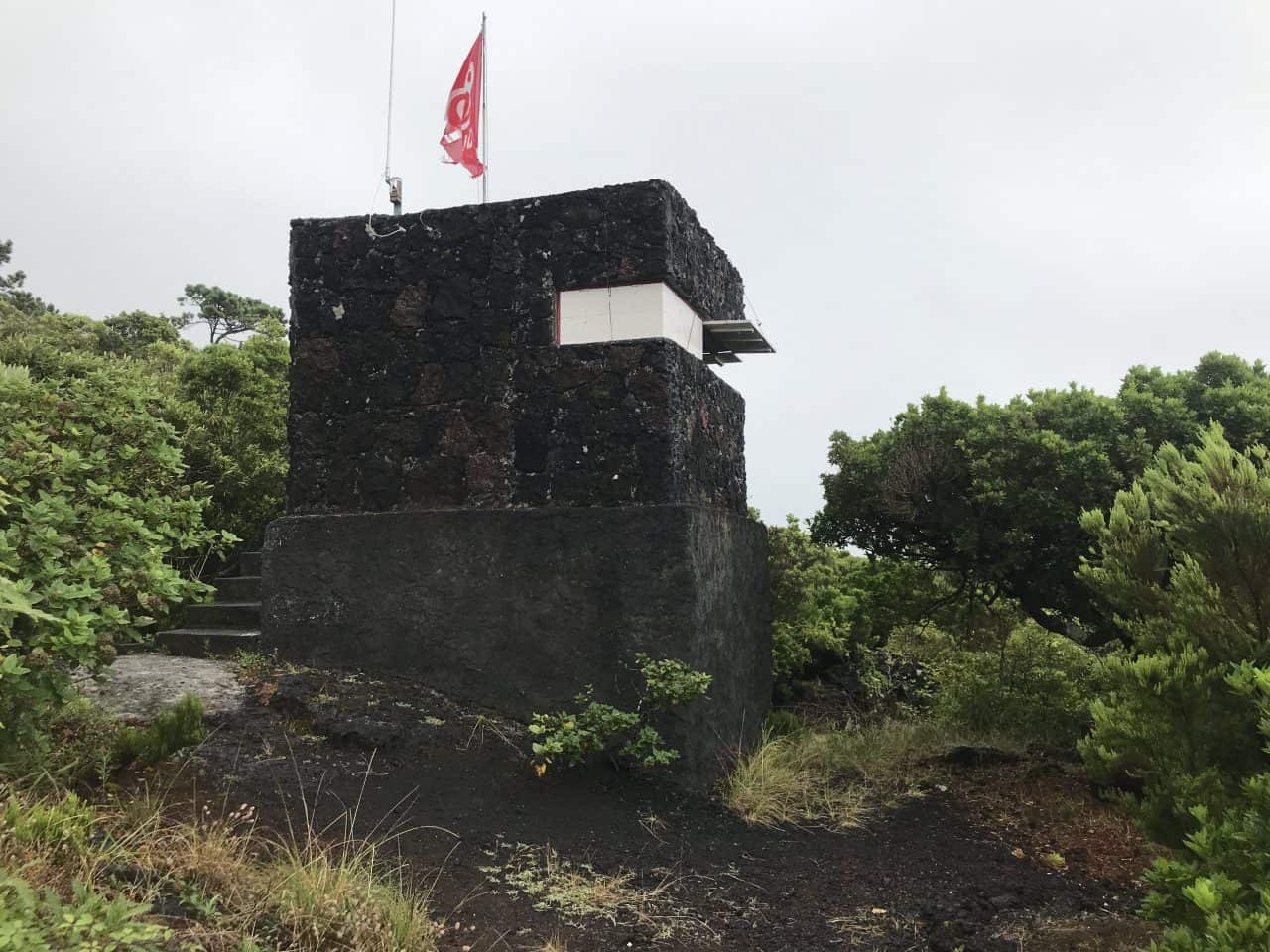 He purchased land just near his uncle’s former lookout and built his own lookout in the early 2000s (above). The lookout is small, enough room to move comfortably, and keep him out of the elements. The lookout has wide narrow windows where he can look out. He showed us his favorite chair and binoculars and demonstrated how he works. The chair is quite simple with a seat and a pole to hold his binoculars, with a compass mounted so he can tell the direction of the whales.  He starts the morning looking in the East and can take sweeping views covering the bay of Lajes. When he spots a whale, he notes the location, distinctive species/features, directional heading and then radios to the whale watch boats to share the information. He keeps a notebook of his sightings throughout the day.

Inside his lookout he has photos, posters, and articles of whales. On the wall he had an article from 2009 where he was mentioned that he spotted a North Atlantic right whale, a very rare sighting for the Azores. 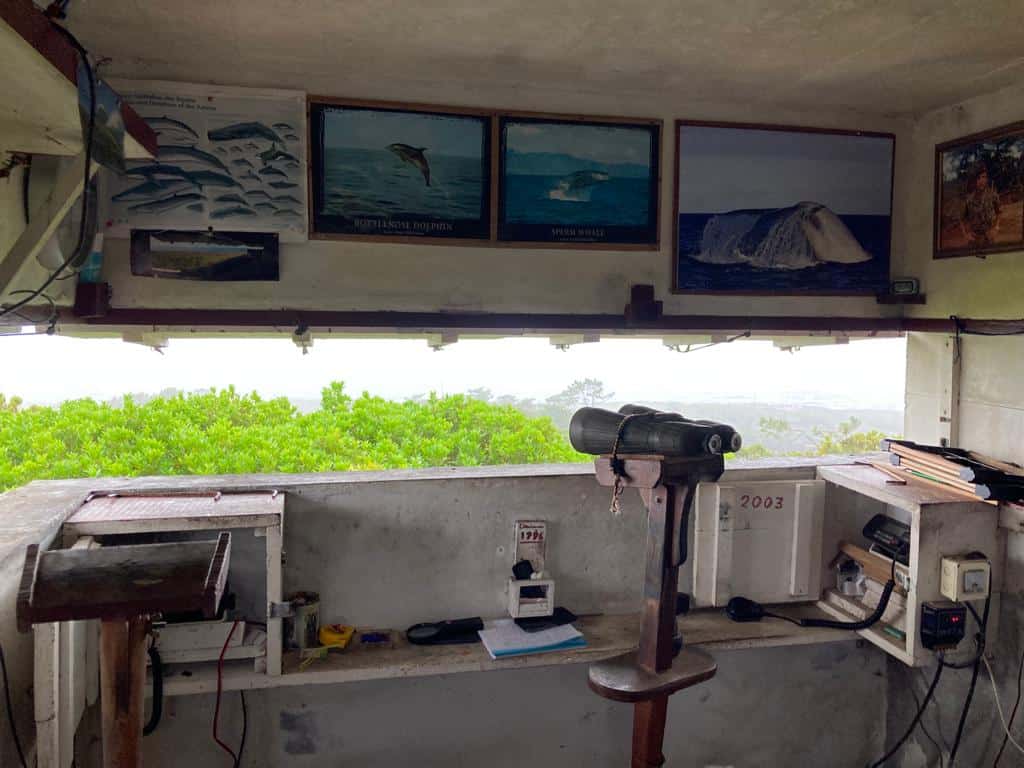 Luckily for us it was a bad weather day and Viagia Antero had time to speak to us, as his whale watch duties were canceled. He also showed us nest of a Cory’s Shearwater (Cagarro) next to his lookout, the same pair has been nesting in that spot for 20 years. The Cory’s Shearwaters come to the Azores to mate and raise their newborn young. They can breed for up to thirty years, from the time they reach adulthood to the age of 40. The Azorean government has a program, S.O.S. Carrago, to educate the public on the conservation of the species. We are currently digitizing a recording from 1968 of Cory’s Shearwaters that Roger has in his acoustic collection.