SnotBot Azores: All kinds of whales! 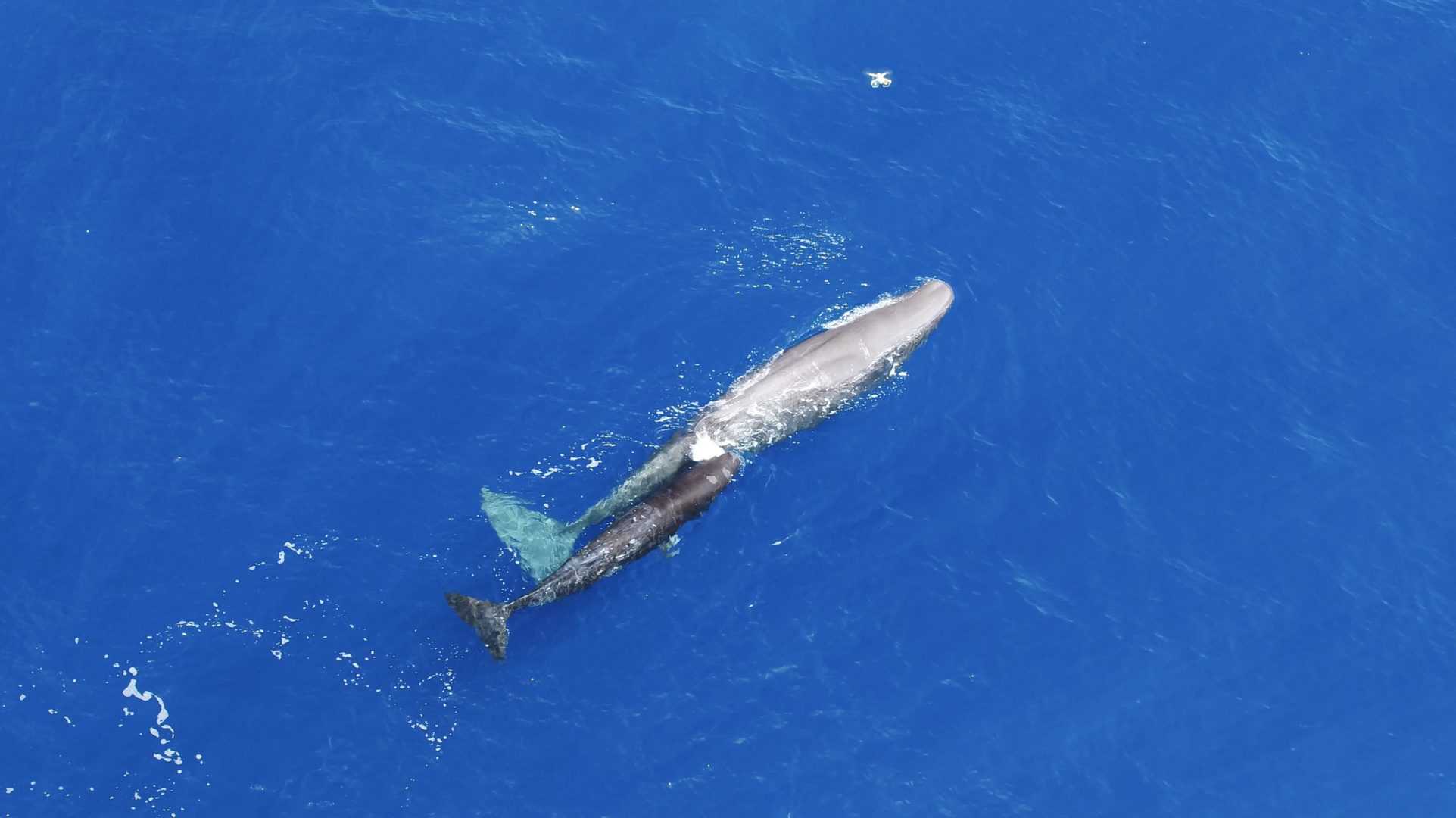 Day 4 started with us all having to get COVID tests, the testing center opened at 8:30 so to get ahead of any lines we were at the testing center by 8:00, even then there were already twenty people ahead of us.  Consequently we had a late arrival at the boat but it worked OK as we were being joined by a film crew from OceanX who wanted time to prep the boat for filming, by chance the OceanXplorer was anchored right outside our harbor so on the way out to the whales we passed by to say Hi to some of the crew. You get a great perspective here of how big this research vessel is when you see the size of the crew on the back rail. 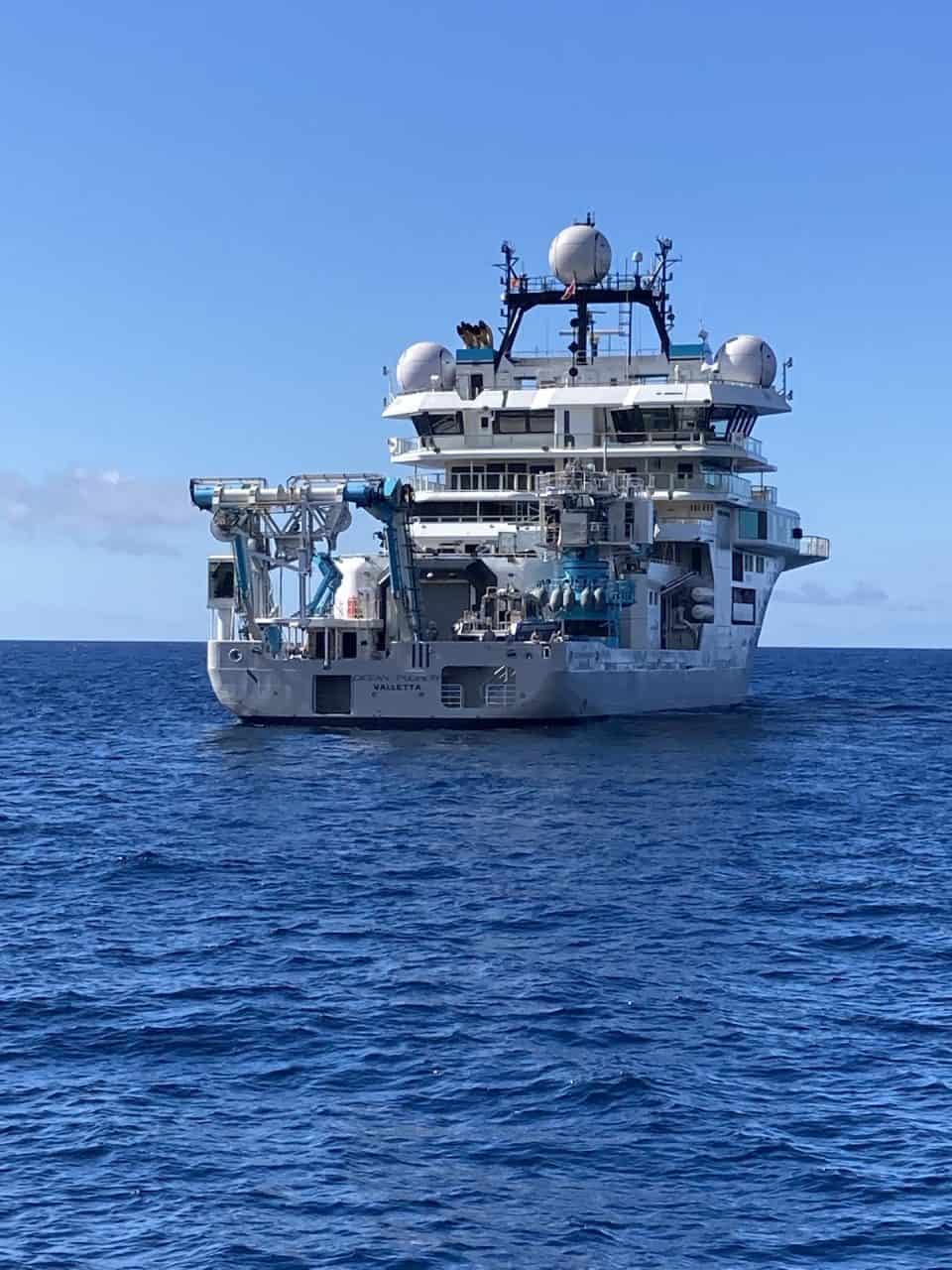 Leaving the OceanXplorer we headed offshore to find sperm whales, but we soon got a report from a spotter (more on that below & later) that a Sei whale had been seen heading out to sea, this whale was not in sperm whale territory but since we had 34 sperm whale samples already we thought it would be worthwhile to get another Sei whale sample. The whale did not make it easy though, heading both upwind quickly and seemingly surfacing at random locations, once to port and then next to the starboard. This was not going to be easy so we got into our routine and timed the whale dive intervals which were between 9 and 13 minutes. With that in mind we then launched the drone 8 minutes into the whales dive cycle giving us the best opportunity to fly quickly over to a newly surfacing whale. Trust me it is never fun to try and get a sample when a film crew has a camera three feet from your face and you are bouncing up and down as if on a trampoline, but we persevered and I was immensely relieved when we got a sample, and then the team reported even more exciting news, the whale was not a Sei whale but a whale rarely sighted in the Azores a Bryde’s whale. Sei whales have a single ridge running down the top of their mouths while Bryde’s whales have three ridges. The animals surfacing behavior now made much more sense as Bryde’s whales are known for erratic swimming and surfacing behavior. This is another validation of SnotBot as an exceptional data collection tool. It would have been impossible to biopsy this animal in these conditions and yet we got a sample on our first sampling flight. So just four days into our expedition we had sampled three new species (to SnotBot) of whales! 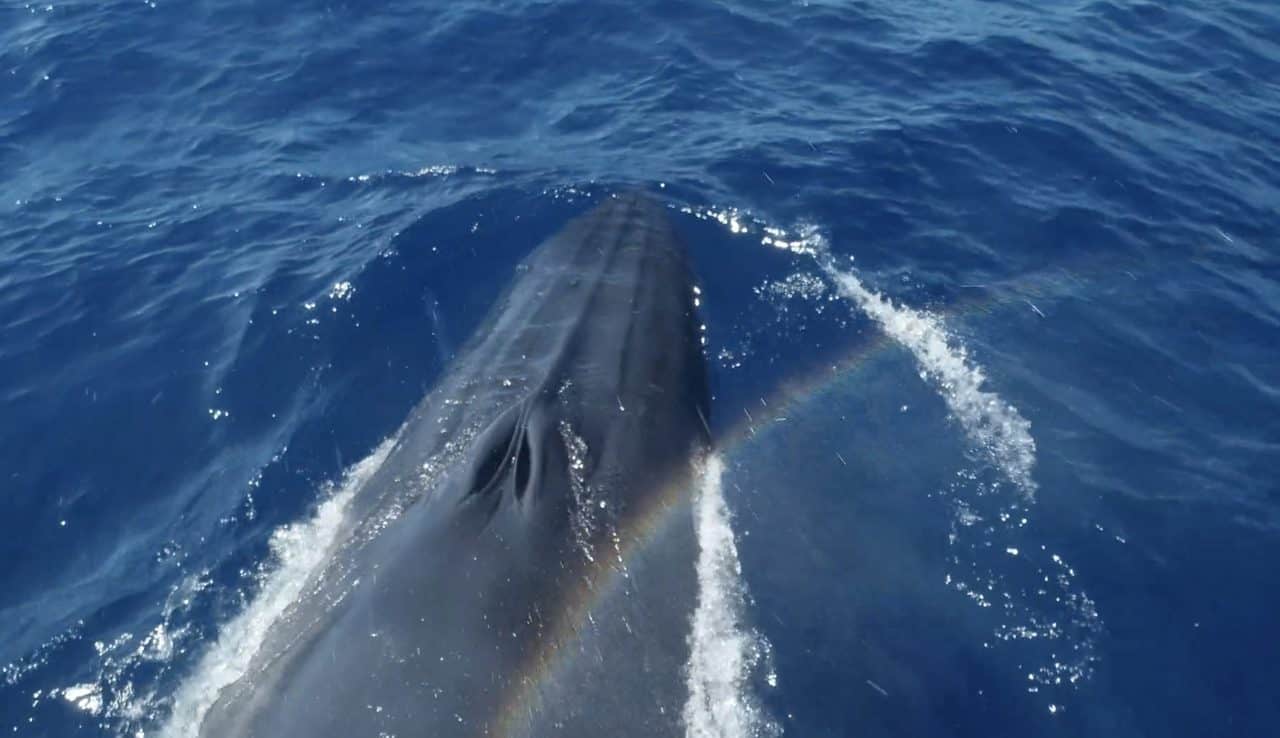 During our time on the water in the Azores the sperm whales have been in loose groups, moving but spread out over say a 4 square mile area. This has worked well for us as we might sample a whale which then dives for 45 minutes while another surfaces less than a mile away. Moving my attention from the false killer whales to the sperm whales we launched a drone to collect Snot and once again I caught some pretty unique behaviors from the air. I was tracking one whale and suddenly it was joined by another and another until I was looking down at 8 whales, this grouping up had to be in response to presence of false killer whales nearby. As exciting as it was to see 8 (and then 12) animals the size of a school bus in my camera frame this did create a problem for us as we only want to collect a Snot sample from one animal.  Luckily one whale was slightly upwind of the rest of the group and I was over the moon (as were the camera crew) when we collected sperm whale Snot sample 35 from this animal. We collected one more snot sample before the group of 12 started moving quite quicky upwind (again most likely in response to the false killer whales) so considering that we had had a very productive day and it was 4:00 pm (2 hours from port) we headed back in – a little beaten up by the weather but over the moon with the data we had collected and all that we had been lucky enough to experience – another example of the amazing biodiversity in the Azores. 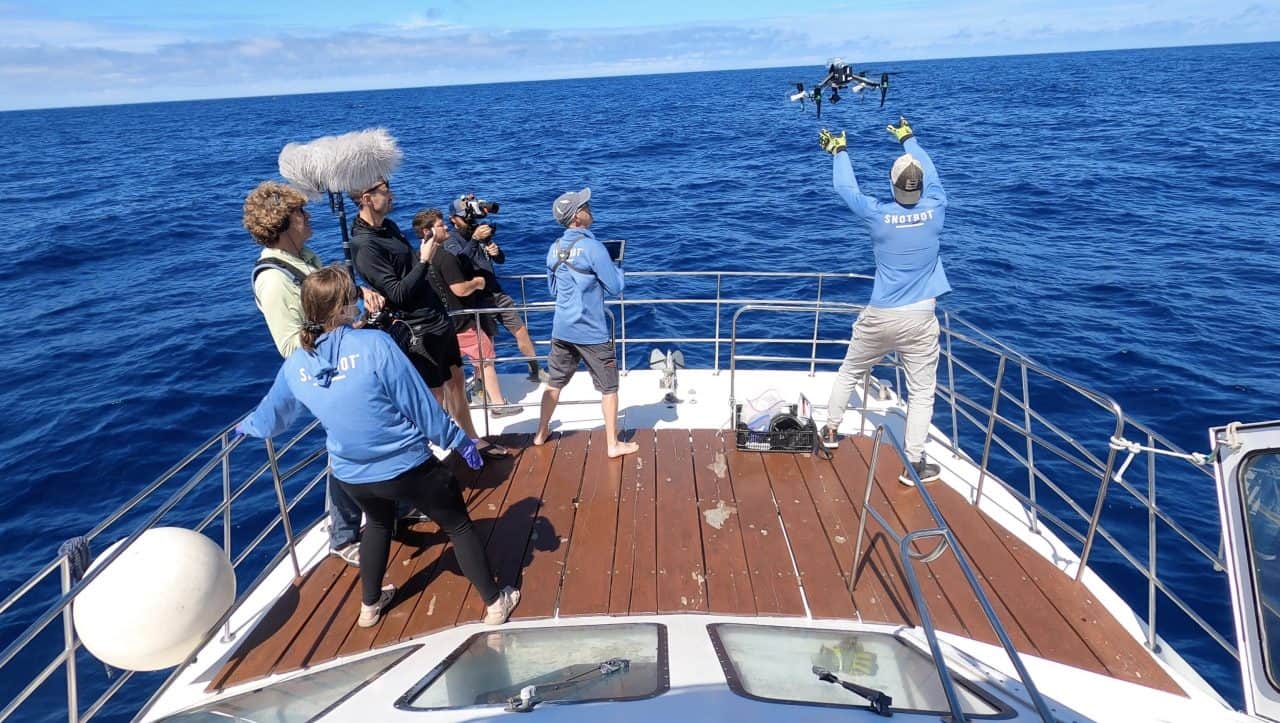 The last few days have certainly been a bumpy ride out on the water but that is par for the course. We try to control everything that we can, team, boat, location and equipment but of course the one thing that we cannot control is the weather. Since our arrival there has been a low pressure system over the Azores which has brought in high winds (12 to 20 knots) and big seas – again think middle of the Atlantic. We have worked through this but as our can imagine when you are constantly bouncing up and down everything is harder, setting up the drones & cameras charging/changing batteries, flying and recovering the drones etc. When Chris and I fly from Noberto’s boat we lean into the forward rail (about waist height for me) to keep our stability since our hands are on the drone controls. When we were following (what turned out to be the fast moving Bryde’s whale) upwind we hit a big wave straight on … I almost did a forward somersault over the rail. Chris also had to do a couple of pretty spectacular drone recoveries that day on what was at the very edge of our recovery limit.

When the weather picked up to 20 plus knots on day five and we had to cancel our day on the water, I will admit to feeling some relief. All of our equipment was covered in salt spray (not the Sony A7S iii Marty) and needed cleaning and servicing and we were all feeling pretty worn down, so we took the day off worked on e mails and equipment and late in the afternoon visited the Capelinhos Volcano which is the newest volcano in the Azores last erupting in 1957.

Our boat captain / Owner Noberto is from the Island if Pico, so when the winds were still blowing at 20 knots plus on day 6 he invited us to come over to his Island and have lunch at his house, he said that in the morning we could visit a vineyard and an old whaling museum, have lunch at his home and then meet with one of the whale spotters I have previously referenced. The vineyards were amazing, with volcanic stone walls everywhere to shade the vines from the wind – I just can’t imagine the work over the years to build them. I have attached two photos of our whale spotter and his hut but Alicia is writing a full blog on our meeting with the “whale spotter” that I will share with you tomorrow. 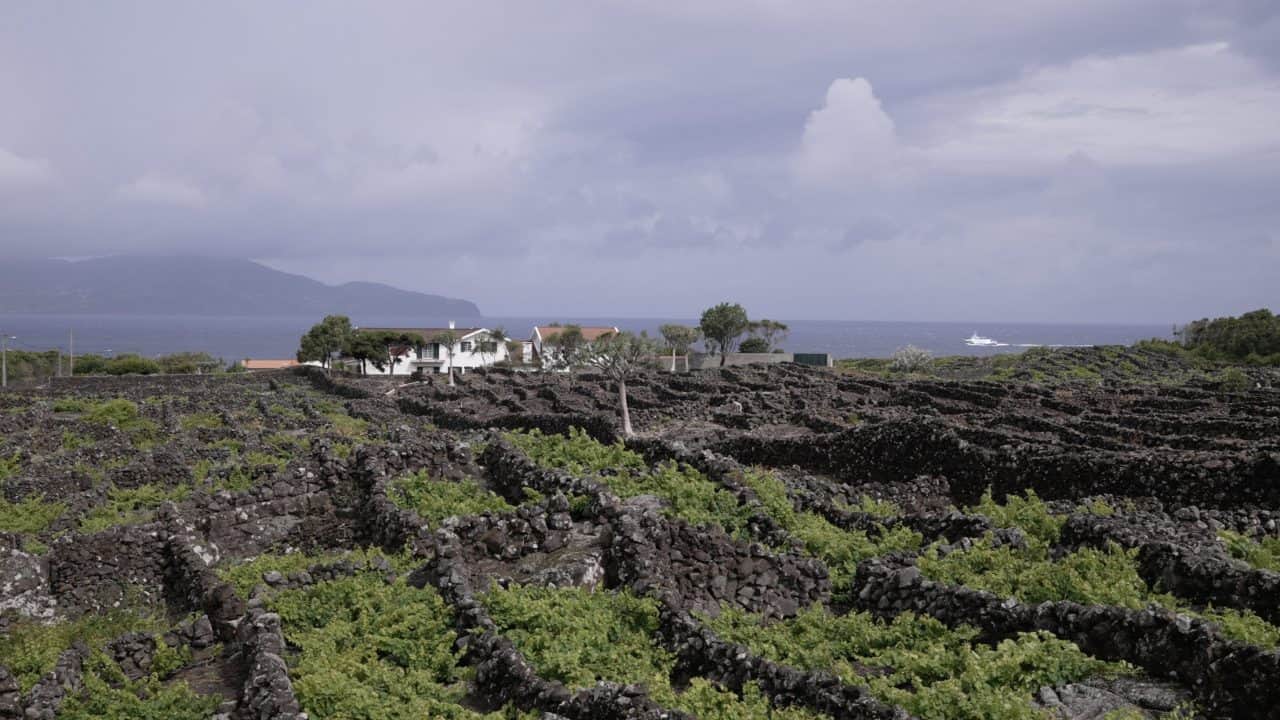 I am writing this on day 7, again we had hoped to go out on the water today but no such luck, but the weather forecast is showing improved weather for the next four or five days, so fingers crossed. My hope is to do something more terrestrial today – maybe like a bike ride .

Be advised that as the expedition has unfolded in collaboration with our good friends at Parley we have been answering questions from kids around the globe and posting them along with video blogs online here: https://drive.google.com/drive/u/0/folders/1QUCY6D1jxQ3PCSVN6FoLj4N1Aj507a5l

If you want to join us for a live education event from the Azores on July 6th at 11am EDT. You can join the meeting at the following link: https://meet.google.com/pzo-jmry-vgt. We hope to see you there!

From the Azores – the SnotBot team wish you fair winds and a following sea.