SnotBot Azores: All about sperm whales! 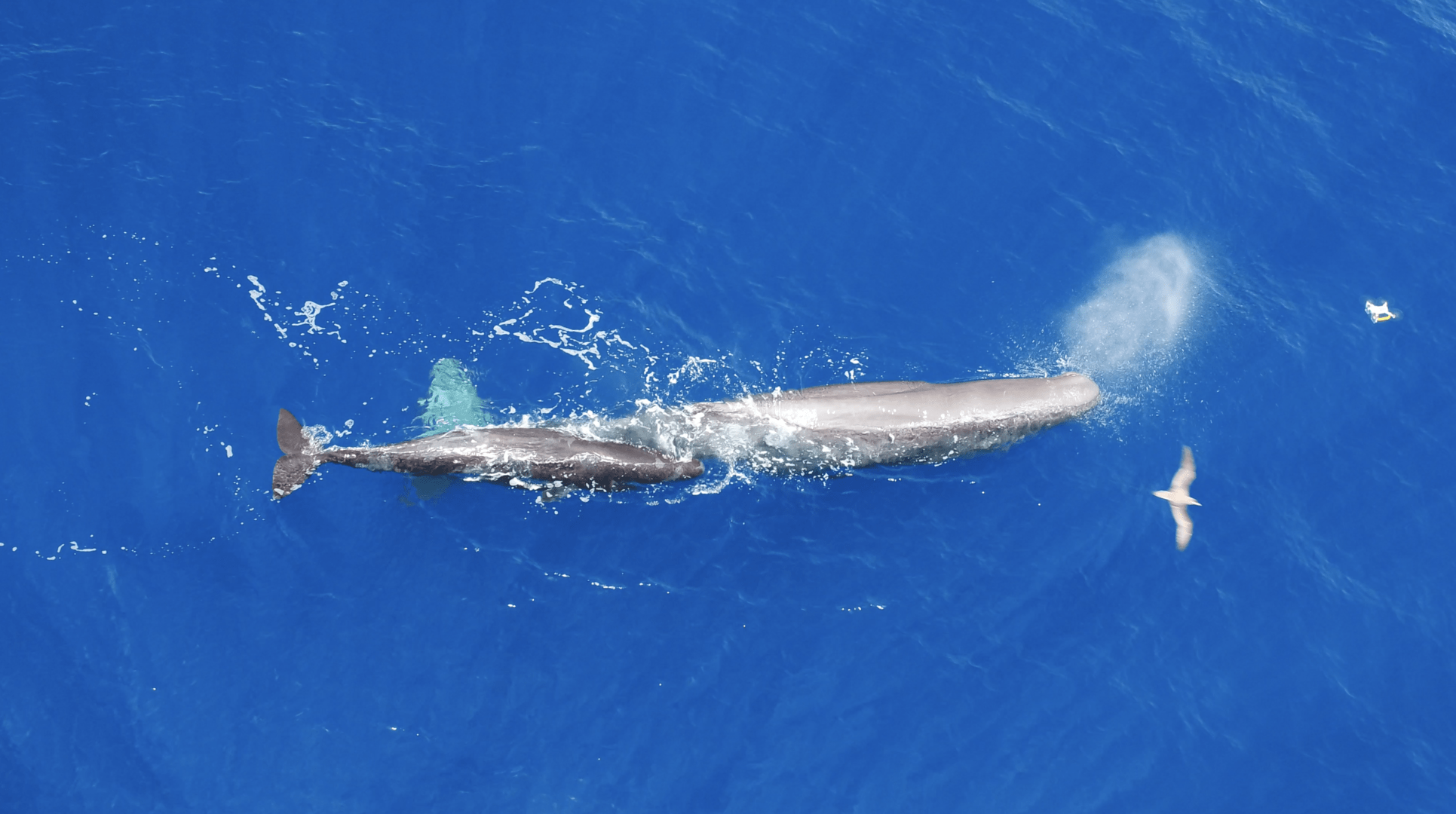 Another update from the SnotBot Expedition 15 to the Azores! In this blog, we wanted to introduce you to the stars of the show, the mighty sperm whale. This is our first SnotBot expedition studying sperm whales, even though Ocean Alliance specialized in researching and protecting sperm whales for over twenty years in the past. Sperm whales are extraordinary animals, and we are incredibly excited to work with them once again.

We hope you enjoy the information below, in which we cover sperm whale physiology, distribution, behavior, feeding, and conservation.

Sperm whales are truly animals of legend and Olympians of the natural world. They are the largest toothed predator to have ever lived on this planet. They also have the largest brain of any animal that has ever lived – a brain that is believed to be primarily devoted to processing acoustic information (sperm whales rely heavily on sound for several key life activities, including feeding, navigation, and communicating with members of their own species). They are also the loudest animal on the planet and extreme divers: capable of descending to great depths for long periods of time.

They are the only ‘great whale’ that is not a baleen whale and are more closely related to dolphins than the other large whales. 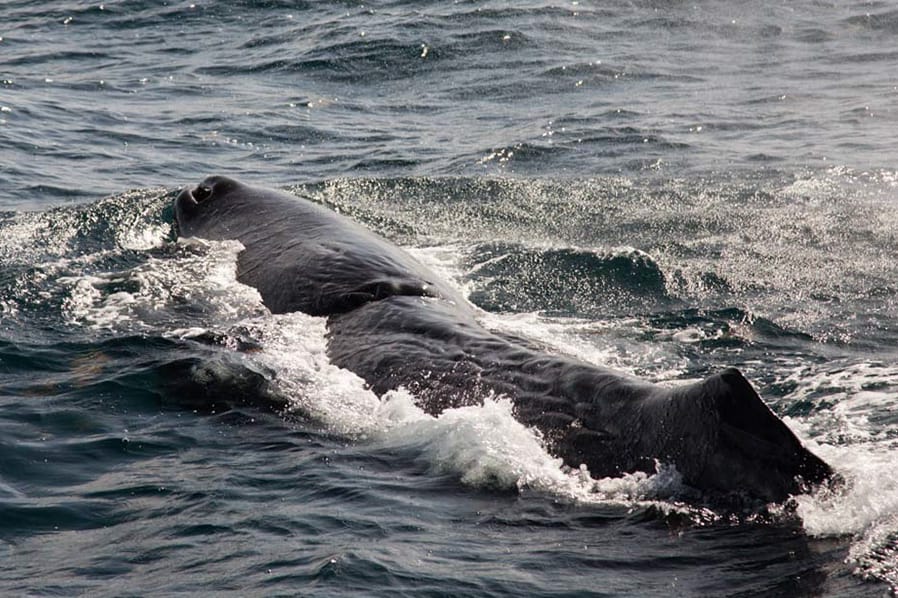 Sperm whales have the highest sexual dimorphism of any cetacean species. While males can reach lengths of over 50 feet and weigh upwards of 50 tons, females are much smaller, approaching 35 feet in length and weighing about 15 tonnes. Their heads are enormous and can reach up to one-third of their length and are perhaps their most distinguishing feature. These distinctly block-shaped heads are used primarily to facilitate their acoustic output.

Their bodies are also highly adapted to life in the deep sea. This explains why their ribs are attached to their spine by flexible cartilage – the ribcage is collapsible, and so their bones are not at risk of snapping when they descend into the depths to hunt for food, where pressure from the weight of the water column will be high.

Sperm whales have an extremely cosmopolitan range, from polar to tropical oceans. They only inhabit deeper water, typically over 1,000 meters in depth, as it is in these deep waters where their preferred prey, squid, can be found. Only males tend to populate higher latitude areas (i.e., the polar regions).

Generally, this species thrives near continental shelves of canyons and other dramatic bathymetrical subsurface features such as seamounts. This is because these dramatic features lead to significant upwellings of cold, nutrient-rich waters, which sustain their prey in large numbers. They are often found in deep waters offshore, although sometimes they can be seen closer to shore where the continental shelf drops quickly, for example, around the Azores and Dominica.

Female sperm whales and immature males live in stable groups in tropical and subtropical waters. As males grow older, they leave these groups and form adolescent groups. These groups shrink over time; as males become older, they become more solitary. Additionally, as males become older, their range shifts towards higher latitudes. When males are old enough, they will return to where the females are to breed.

These stable groups share many of the characteristics we associate with culture. Sperm whales communicate with one another with clicks, and different groups have their own ‘language’ or system of clicks which can be very similar or very different from other groups. We call these specific click patterns ‘codas’. These unique languages are passed down between generations of the same group. This system of communication is believed to be one of the most complex in the animal kingdom.

Female sperm whales have several natural predators, including killer whales, pilot whales, and false killer whales: though this seems to be a rare event. Full-grown adult males are believed to be too large and powerful to be predated upon.

Sperm whales feed almost exclusively in deep waters between 300 meters and 2,000 meters in depth, searching for their prey. They use echolocation to find dense aggregations of prey in the depths from a distance, and as they approach prey, they use rapid buzz clicks to home in on and successfully capture prey. They likely feed on all medium and large squid they find, including giant and colossal squids. 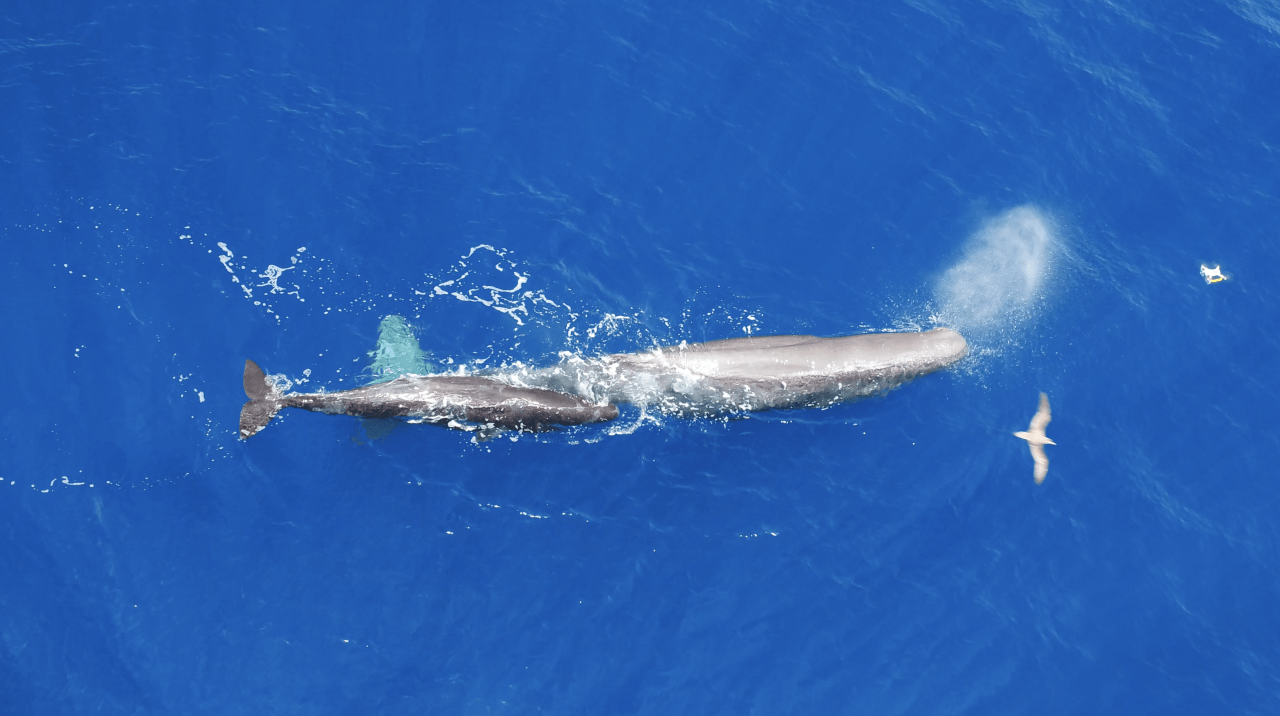 The sperm whale is listed as Vulnerable by the IUCN, but specific populations such as the Mediterranean are endangered.

Efforts to assess the conservation status of sperm whales are complicated. They are an offshore species with an extremely cosmopolitan distribution, including deep offshore waters far from land.

The pre-whaling population is believed to have been slightly over 1 million animals. Current estimates suggest that the global sperm whale population was reduced by whaling by about 70% and that the current population could be anywhere between 100,000 and 300,000 individuals. The problem is that in many areas, the population doesn’t seem to be increasing, and in some places, the population is decreasing.

However, the biology of the species and a maximum rate of population increase of around 1% per year (Whitehead 2002) show that the species is not well adapted to recover from population depletion whaling).

While there are a handful of places around the world where sperm whales continue to be hunted by indigenous communities, these hunts do not represent much of a threat to the conservation status of sperm whales. When not being actively hunted, the sperm whale does not have too much interaction with humans as its habitat is far from land, and few of its food sources are targeted by commercial fishing operations.

Entanglement in fishing gear, particularly gillnets, has been a particular problem in some areas. Observations of takes in small-scale gillnet fisheries suggest much larger takes in unobserved, unregulated high seas driftnet fisheries.

Ship strikes and ingestion of marine debris are also threats at a more regional level.