Woodstock was a watershed moment; it identified who made the music that changed the world. Those at the People’s Climate March will play the tunes that change the world.

Lisa and I came to New York for three events: the projection of images on the United Nations buildings; the 310,000 person People’s Climate March; and a Multifaith Service at the Cathedral of St. John the Divine. 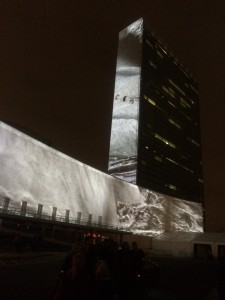 All three were inspirational—the images on the UN buildings were breathtaking, though the police shut down projection of images that moved by OPS  (Ocean Protection Society) founder Louie Psihoyos because cars on FDR drive were slowing down to look at them causing a traffic tie-up.

The March itself was moving beyond description—moving in a way I have not ever felt more deeply, and the Multifaith service was the grandest surprise. We sat in the Nave of the Cathedral beneath two massive sculptures of the Phoenix created out of discarded wastes, wrapped in tiny lights and looking like the Milky Way. The ceremony was opened by Chief Arvol Looking Horse (19th generation keeper of the White Buffalo Calf Pipe Bundle) and one of the leaders of the march. Among his remarks was this comment summing up the days’ event: 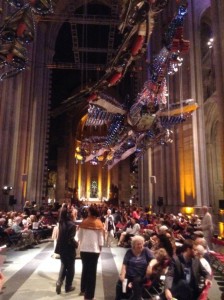 Today.
Many Generations.
One Prayer.

We heard from Jan Eliasson, Deputy Secretary-General of the United Nations, Al Gore, writer Terry Tempest Williams, Vandana Shiva (Nobel Prize winning founder of seed banks in India), plus 15 other speakers, all of whom, as they placed a stone on an altar in the center of the transcept, made a vow as to what they will do from now on for the earth (as did the entire congregation as the vast nave resonated with music by Paul Winter and others).

The most inspiring speaker for me was a Greenlander: Eskimo-Kalaallit Elder, Angaangaq Angakkorsuaq, Founder of IceWisdom. He said that he was born and had lived his whole 77 years by the Big Ice, and that when he was a child it was 5 kilometers thick and is dwindling FAST. He ended with an invocation to his ancestors which was riveting—his voice has clearly been shaped by a life spent in the embrace of Nature, wrapped in it, worshipping it, loving it, dreading it, revering it, thanking it. His message was: It is too late. We have failed in our response—and unless we melt the ice in the heart of Man things will not change.

As I write this, the action called Flood Wall Street is beginning—a dramatic acting-out of the harsh reality that when you put all power into the hands of the hyper-rich you close the doors to the courtroom, and open the doors to the street.