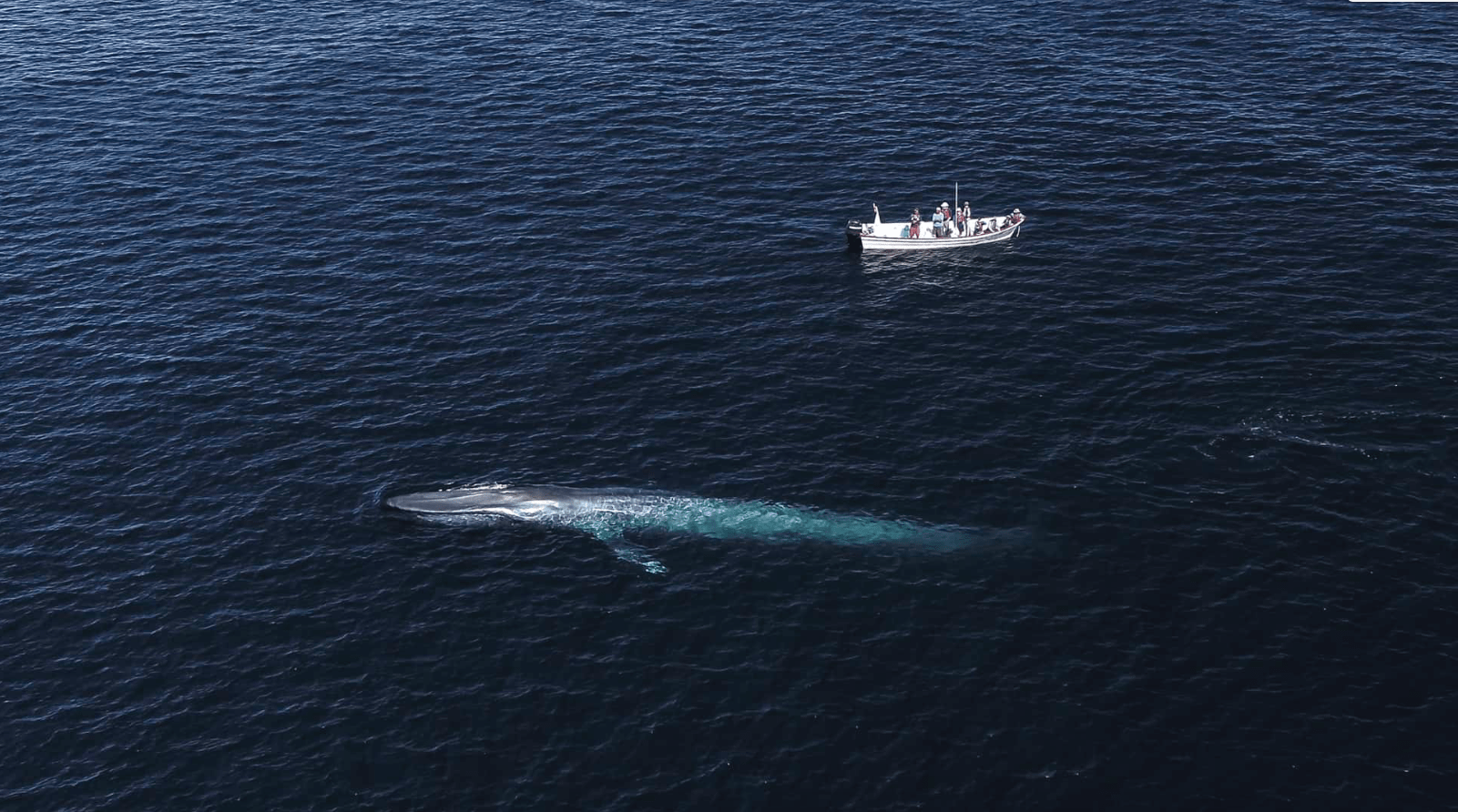 Dear Friends,
The Sea of Cortez has put us through our paces — over the last three days, we have had to work harder than ever before to collect blow samples.  In short, the blue whales are just not here and the ones we have come upon are typically surrounded by whale watch boats. As in the USA, we are not allowed to collect samples when the whale watch boats are present. But even with many challenges, there have been great rewards.

Yesterday on the way out to the whale(less) grounds, we saw two plastic bottles moving in the water. We went to investigate and found an extremely distressed green Sea turtle entangled in nylon ropes tied to plastic bottles keeping the contraption and the turtle afloat, restricting her from diving and exposing her to predation.  Our expedition Director of Photography, Christian Miller, also runs the Cairns Turtle Rehabilitation Center in Australia, so it was this turtle’s lucky day. In no time Christian had the turtle out of the water, and I cut through over 30 nylon coils wrapped around a flipper. 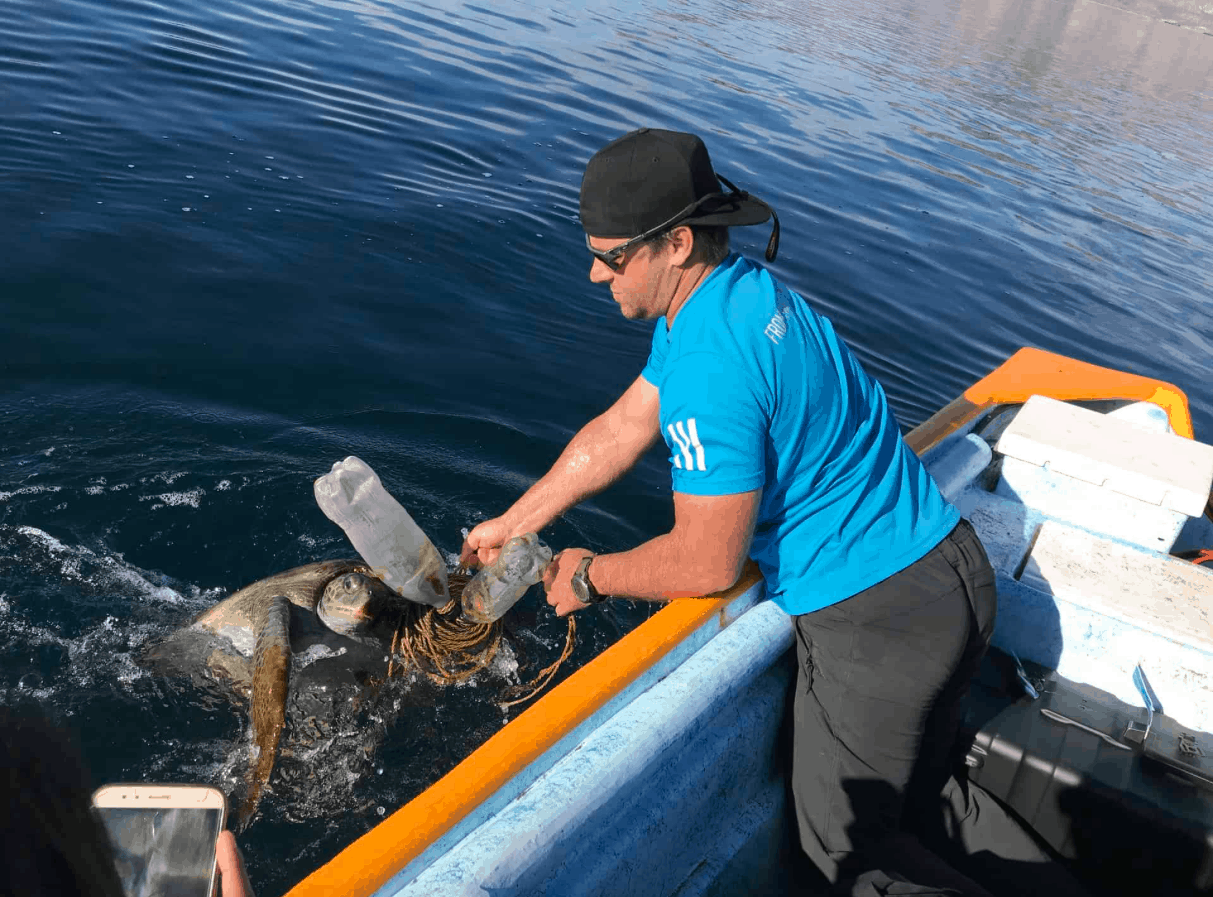 It looks like it was a recent entanglement because the lines had not cut deeply into the flesh, although Christian said it was quite badly bruised.  It put a huge smile on all of our faces to see the turtle swim free and head out to sea. 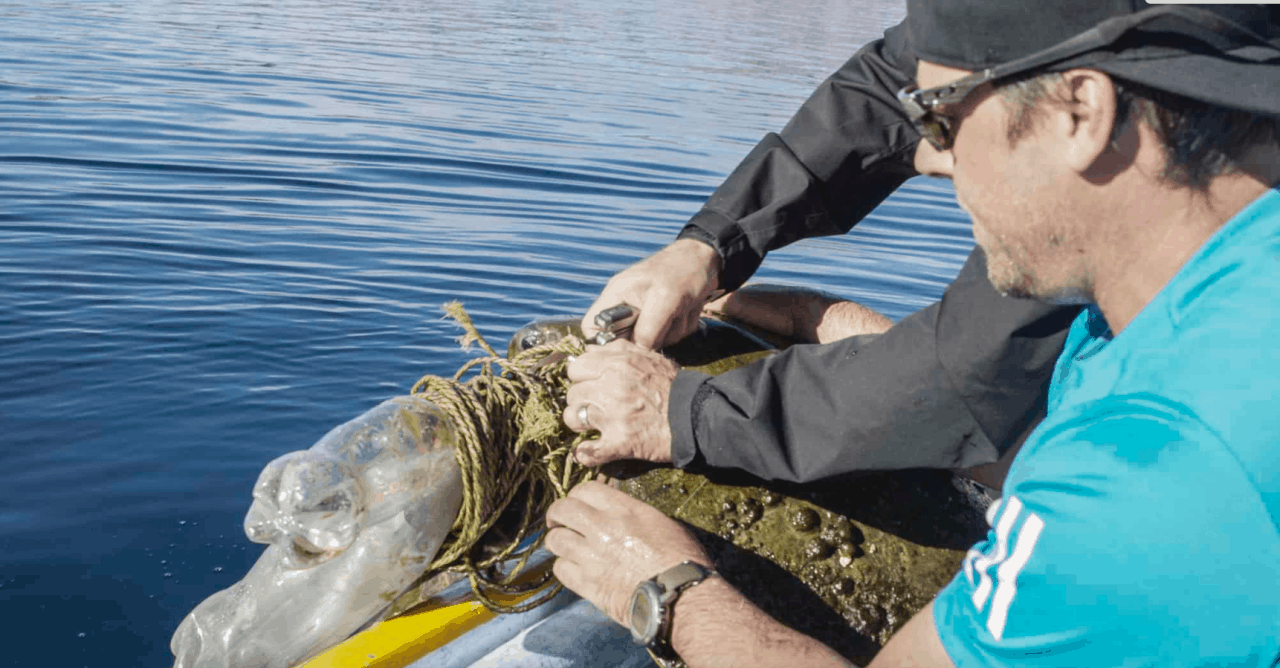 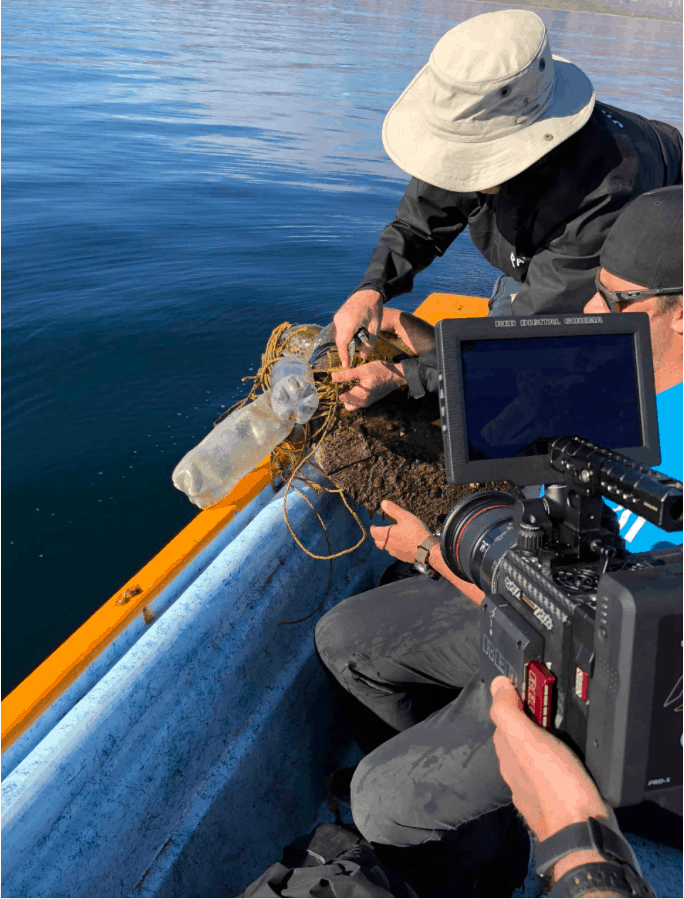 Good job, too, because the next 5 hours were not as exciting, in fact they were as frustrating as hell!! We must have covered over 40 miles, and we did not see a single blow, even though seven crew members were staring intently at the water and using whatever incantations they could think of to attract the whales (I might even have mimicked some whale songs to try and call in the whales).

The absence of whales is of great concern to us because last year we saw over 30. Loreto is meant to be a high-density breeding ground. I am going out of my area of expertise here, but it seems to me that we are seeing more and more of these abnormal wildlife situations, from Humboldt squid off Los Angeles to unusually large blooms of jelly fish off Asia and Europe.  The one thing that everyone here seems to agree on is that the krill are just not in Loreto, so no whale food, no whales.
So, how do we find the whales on Parley SnotBot expeditions? We work from a 25-foot boat, studying 75-foot whales. (See top photo)

We try to cover as much territory as we can in our boat (typically running at 20 Knots) and the team is on constant watch until we see something of interest; each person covers a specific sector of ocean looking for clues, whale blows (of course), but often the clues are more subtle, a big group of birds, a brief mirror-like flash of light on the surface, other boats that have stopped in the water.  If we see anything out of place, we stop the boat for 10 minutes and drift and look with binoculars.

Because of the lack of whale’s we have been pushing ourselves and our equipment. The first blow is always the biggest and therefore ideal for a robust sample, but we rarely have an opportunity to get a first blow. Typically, we see the first blow and fly the SnotBot over to the whale to catch the second, third and or fourth blows. On day one, flying at 100 feet, I was just able to track a whale that was swimming underneath the water (even though sometimes all I could see was a slight discoloration of the water), here was a potential opportunity to get a first blow. With reporter Dexter Thomas from Vice News looking over my shoulder, I was determined to make it happen, but after over 20 minutes in the air, 16 minutes of which was tracking this whale (now quite a distance from our boat), my drone said “low battery return home.” I had to override the return home feature (typically not a good idea) to keep flying, and the whale gods rewarded us; one more minute of flight gave us a spectacular sample and I got the drone back to the boat before it ran out of battery and dropped into the water.  Screenshot of this blow en route to our petri dishes. 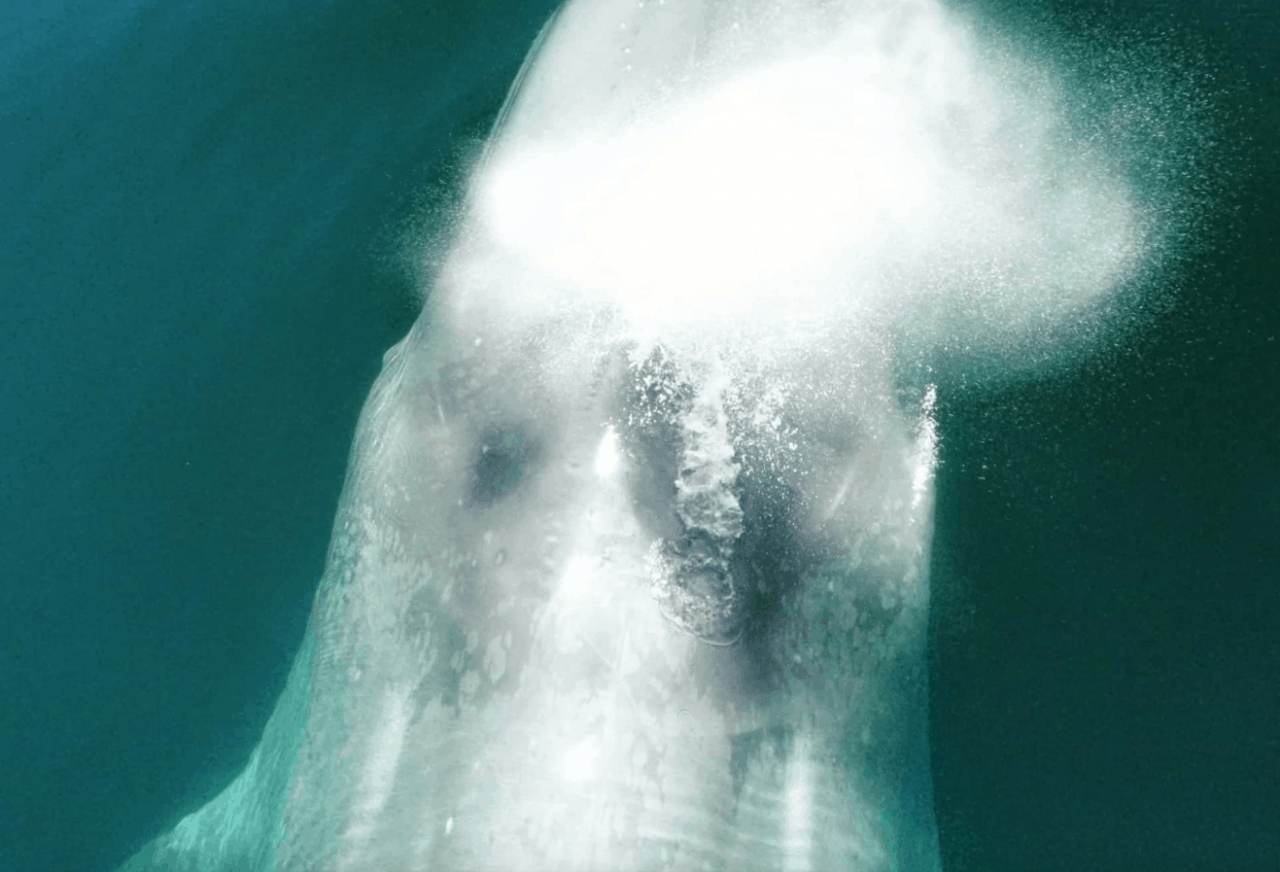 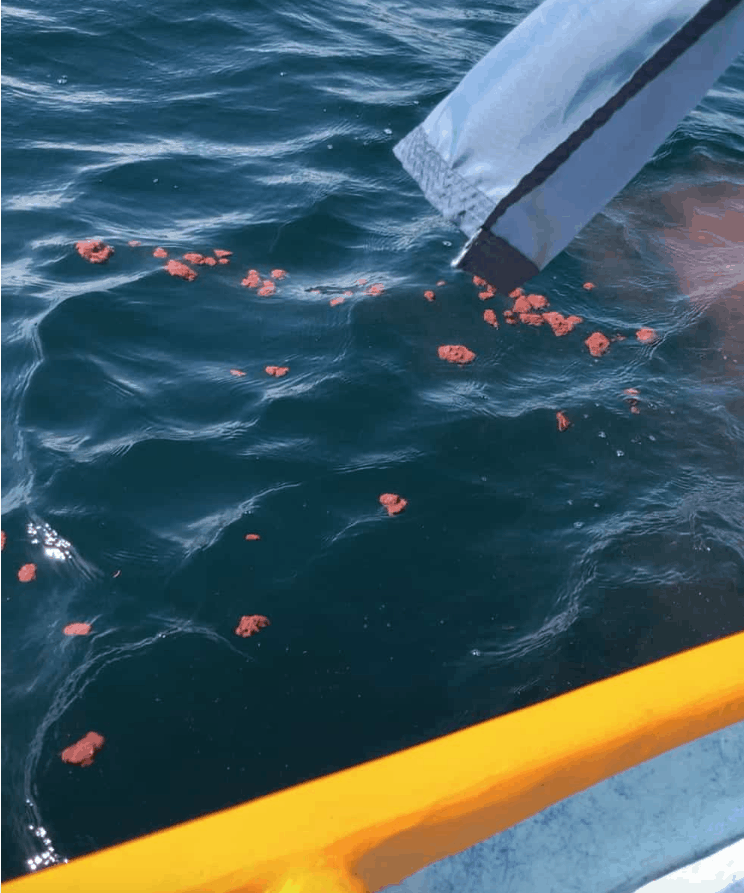 After finding whale poo, the pressure was on for me to get a blow from the same animal which I did on the second attempt. Just as an aside blue whale poo STINKS and we are trying to find a way to dry it (to bring home) at our hotel without getting kicked out of the hotel!!!!!
While the number of encounters we have had (to date) have been small they have been productive. We came across a mother and calf on day two, and along with the spectacular photos from Christian (below) he caught video of the calf playing. 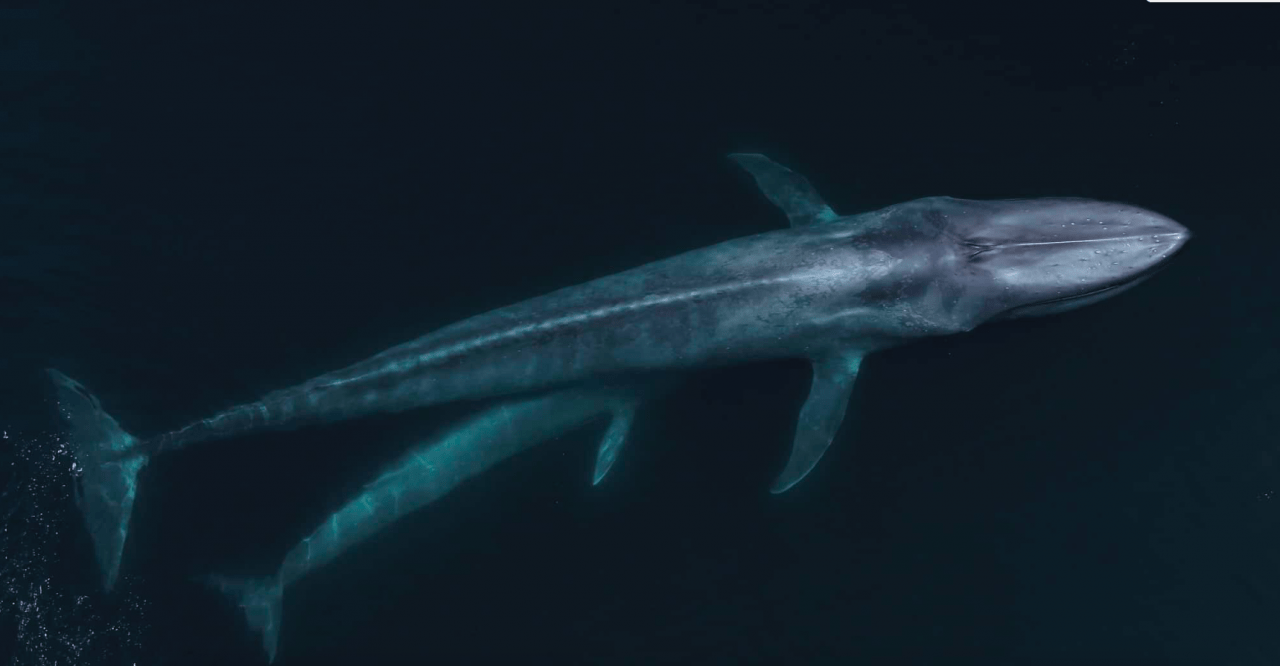 This calf probably weighs about 10 tons so imagine 8 SUV’s all welded together in your back yard playing – it was quite a sight. We also think that we may have captured the calf nursing, I have attached another of Christians photos and you can decide for yourself. 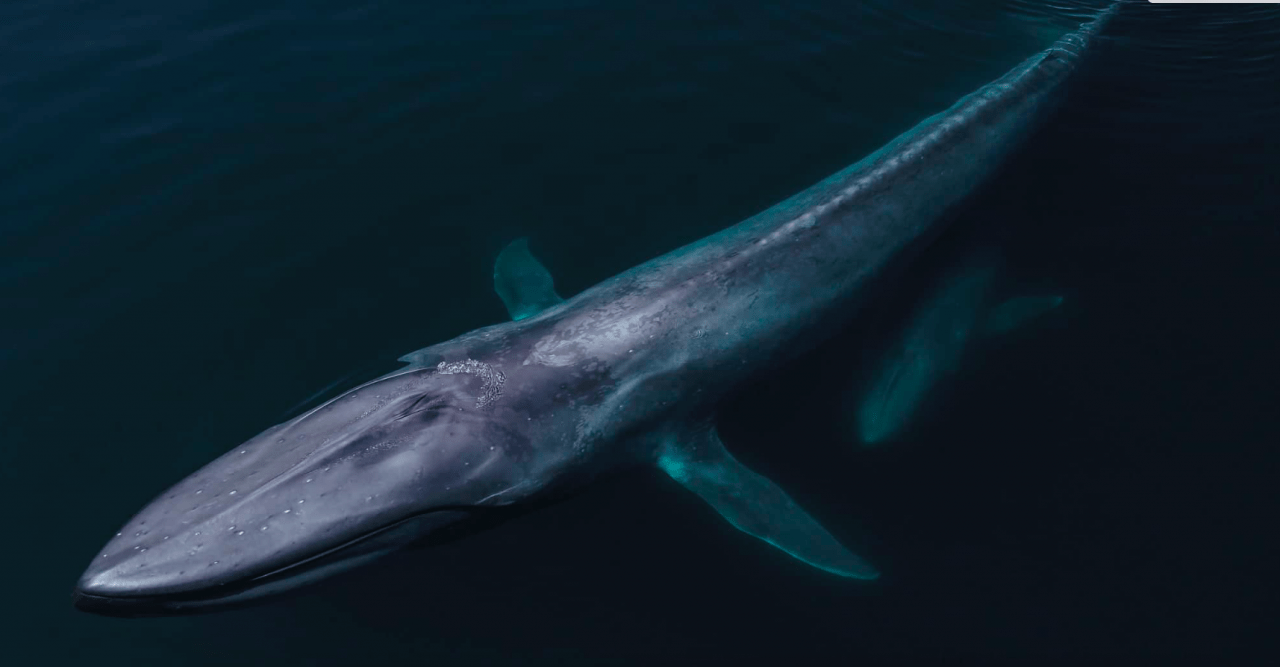 Logistics for these types of trips are always a challenge, there is no Home Depot just down the road or drone store nearby so we bring a lot of gear, and that gear is of no use if you leave it in your hotel room, so we don’t travel light.  This year we have been very lucky to have Gloucester neighbors Peter and Laurie Hayden aboard the (now) research vessel Tanglewood acting as a support vessel, of course we would not be rude and put a too much stuff on their boat. 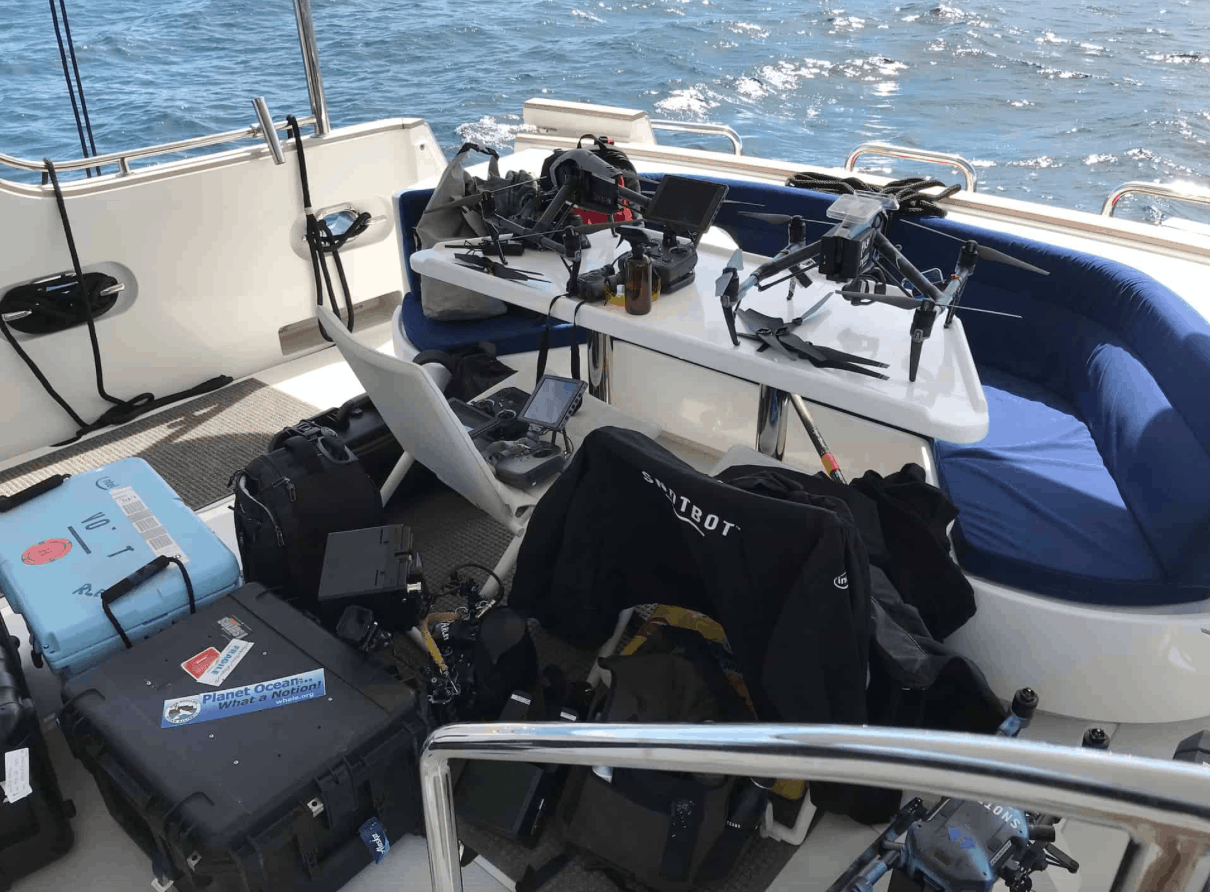 Peter and Laurie really saved the last two days when our inverter battery charging system could not keep up with the number of flights we were making, they came to the rescue and RV Tanglewood was soon a floating drone battery charger, keeping the Parley SnotBot on mission!

Last but not least we did find time to do a short flight with our amazing new drone the Matrice 210 – FLIRBot (Thank You FLIR) we successfully captured some thermal images of whales but this was at the end of a very long day so we have more trials planned.

From a happy, tired and sunburnt Parley SnotBot team – with 21 Snot and 1 Poo sample.
Best Fishes from Mexico.
Iain