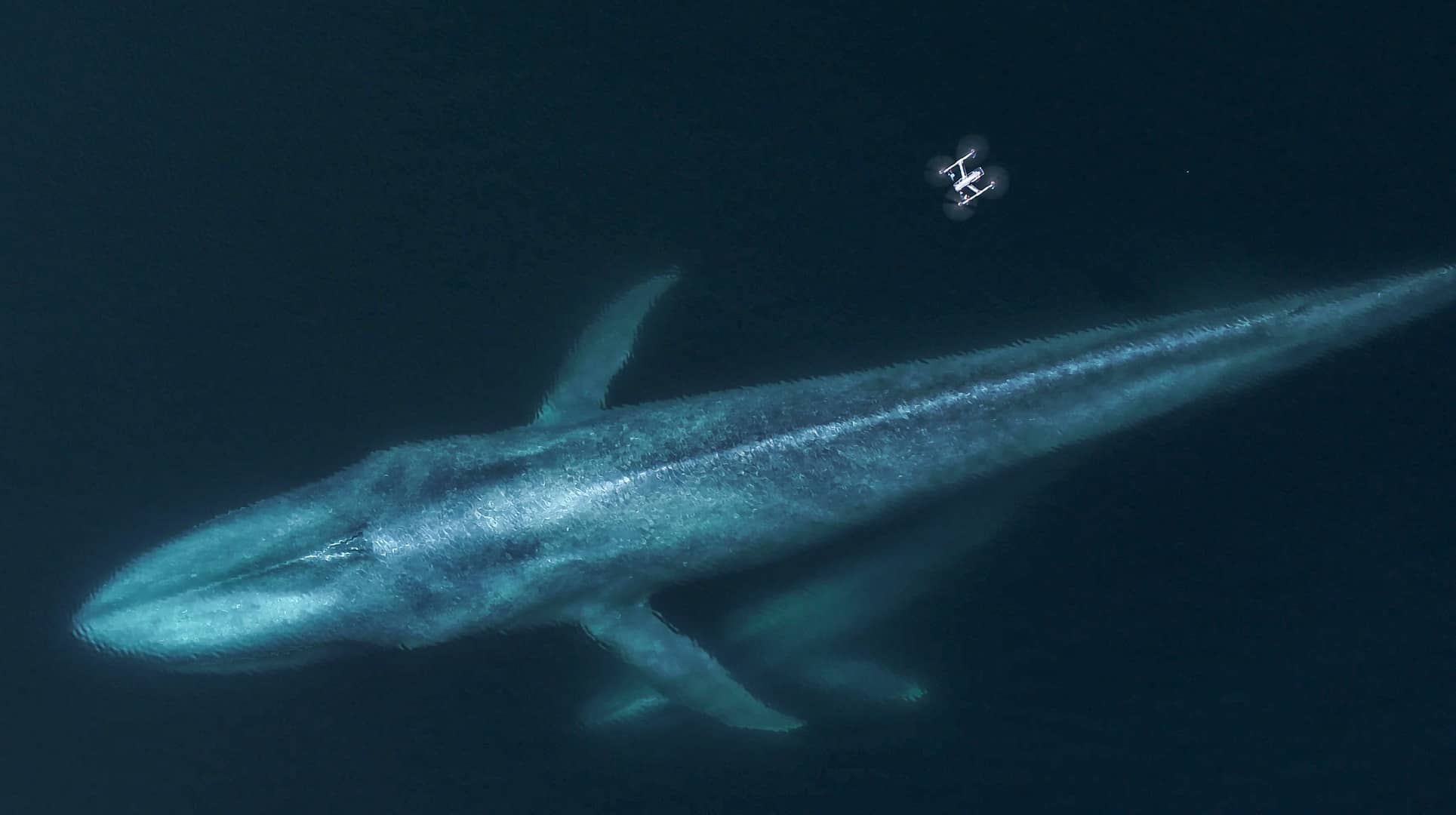 Dear Friends,
As I stood in front of six U.S. Customs officers at LAX airport with whale poop in one hand, whale snot in the other, and permits all over the table, I thought, “What a long, strange trip this has been.”  When you first speak to officials either entering or leaving a country and explain the work (collecting whale snot with drones) they either think that you are joking or insane.  LAX was a classic case, with one Customs officer thinking this was the coolest thing he had ever heard of, two wanting to see the pinkish whale poo, and one convinced I had to be breaking some law.

Considering that these blogs are just highlights of our work, they probably make our work seem more exciting than it is. Sometimes it is just plain shitty. Right after doing an interview for Vice News I went out onto a public deck at our hotel and jumped over the railing onto the roof. I wanted to dry some blue whale poop in the sun under tissue paper to keep away the flies (photo 1). 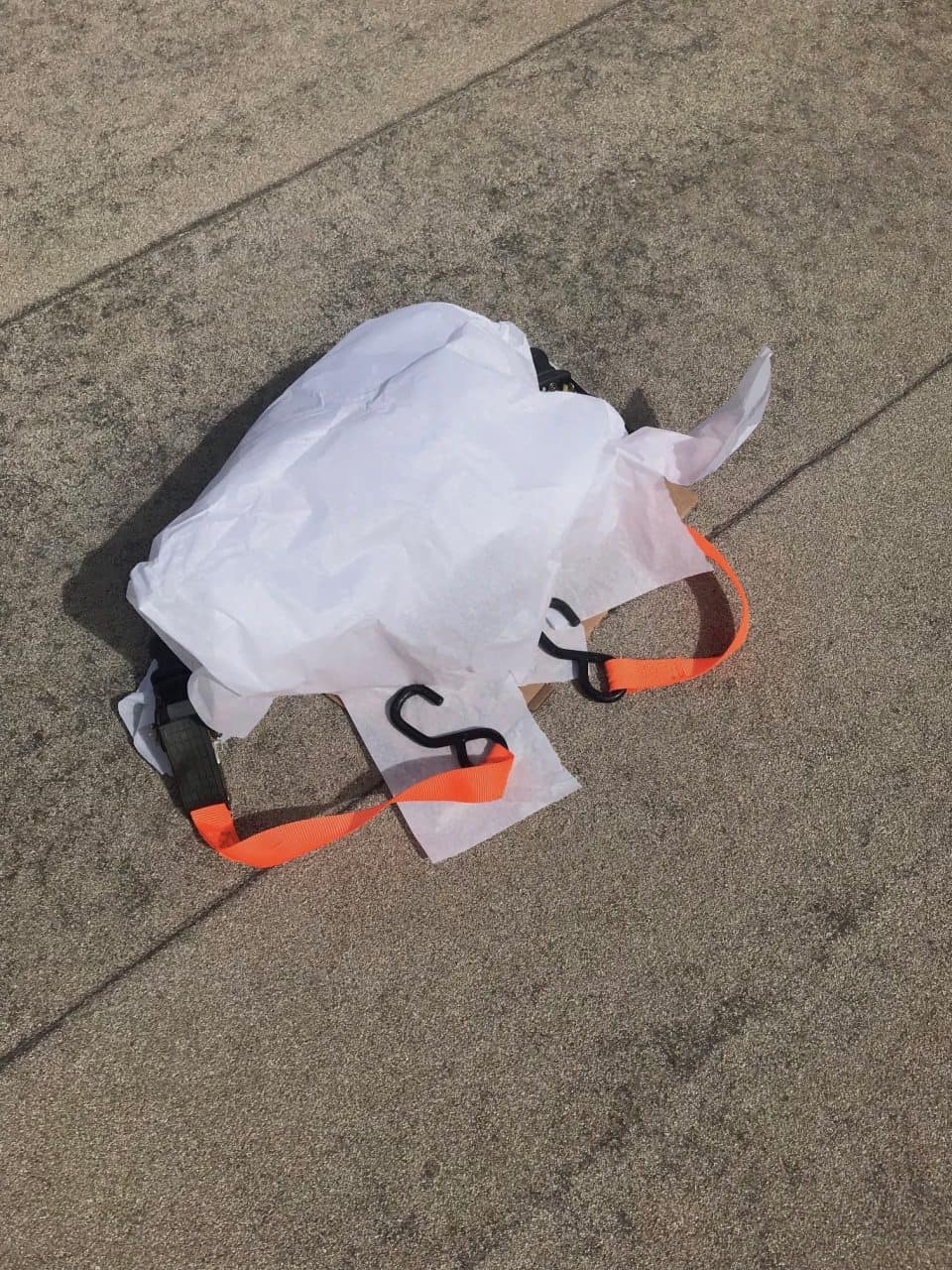 I went onto the roof because I did not want someone finding and throwing away our poop. It turned out to be harder to get the poop bag open for good drying than I thought, so I ended up with whale poop all over my hands. As I turned to go back into the hotel room the wind blew the door shut. I did have a key in my pocket but my hands were now covered in stinky poo, and we were on the 5th floor (you can’t make this stuff up). Christian finally heard my plaintive knocking and let me in. On hearing my story I caused Christina pain because her hysterical laughing hurt her sunburnt lips. 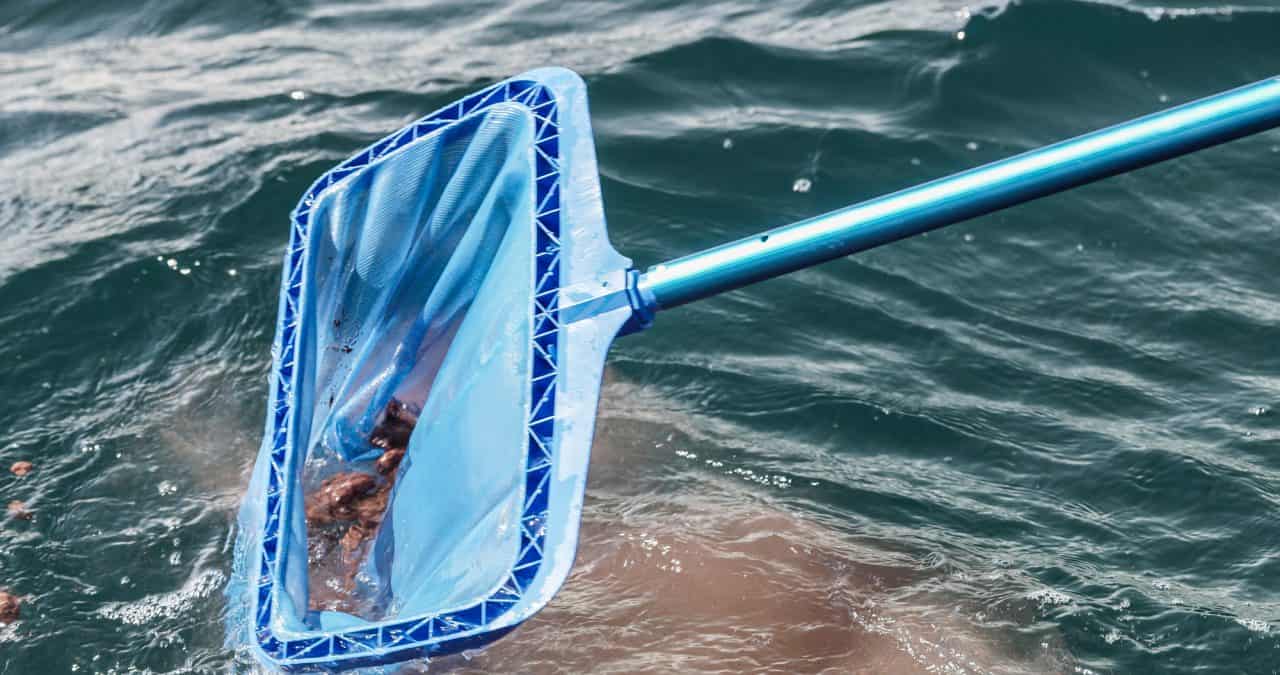 The lack of animals on this trip pushed us to our limits. At the time it was frustrating, but since 50 percent of our goal is developing and testing the data collection tool that is the Parley SnotBot, pushing us to our limits resulted in great data. For example, 4:00 pm on the afternoon of the last day, eager to get more samples, I had my drone up at about 280 feet, a proverbial eye in the sky looking for any sign of whales. I thought that I saw something it the distance so I flew toward it. It was not a whale, but something else further out caught my eye so I flew towards that. Yes, a whale in the distance! I flew at full speed to the animal. I have no idea how many blows the whale had done before I got there but I managed to get a really good sample on the last blow and I watched the whale dive. After I have collected a sample I always fly the drone up to about 50 feet and take stock of the situation. Looking at my instrumentation I was stunned to see that the drone was over a mile (almost 2 km) away from our location. Immediately I checked my battery but I was in good shape to get back to the boat. It was not until later in the day that I realized how remarkable an event this was. I had collected biological samples and photo ID from an animal that was over a mile away from our location – this has to be the epitome of a non-invasive tool. I advise caution to any of you who might want to mimic this effort because in the USA you are not allowed to fly Beyond Line of Site (BLOS). We had to work in a very remote location and register our drones with the Mexican military to do so.

Some people still don’t understand why we are using drones to study whales. I don’t think that they realize how difficult whales are to study compared to most terrestrial animals. I say to people, imagine sitting on the Serengeti studying elephants.  Your life would be immeasurably harder if every 20 minutes the elephants blew salt water all over you and then disappeared under the Serengeti for 6 to 17 minutes (up to 90 minutes with sperm whales), coming up sometimes over a mile or more away in a random direction. It’s just not easy to study whales, even with all of our tech, but the equipment we are using has given me and my peers views and information on whales that we could only dream of a few years ago. One struggle we are now facing is that we are seeing so may unique things, we have too many opportunities in to explore. To meet this need we will be expanding the Parley SnotBot program into a larger Drones for Whale Research Program this year.

And then we come to studying whales at night. Acoustic evidence suggests that many species of whales are more active at night (you hear a lot more echolocation of different species at night). This is likely both social and feeding behaviors. To the best of my knowledge, no one is studying whales at night. The few studies I did find online with night vison and infrared cameras was with equipment that cost hundreds of thousands of dollars – which is not replicable. I did hear a talk by Scott Kraus from the NE Aquarium on night vision tech he tested so there is clearly an interest and future here.

We are lucky in New England to have a number of great tech companies that have offices in the area, one of them is FLIR,  a leader in night vision technology for the military, rescue, recreation and scientific use.  I was greeted with open arms when I suggested that we use FLIR tech for studying whales at night. My focus evolved when I was thinking about human health and the one thing they do whenever you go to the doctor ….. take your temperature. It’s amazing to think that no one (to the best of my knowledge) has taken the body temperature of a free-ranging whale. I have flown a FLIR camera over whales in Alaska and did photo a blowhole, but considering that the water acts like a mirror to FLIR, it is hard to decipher what you see when you look down at the water and consequently track the whales and get the drone in the right position for the shot. 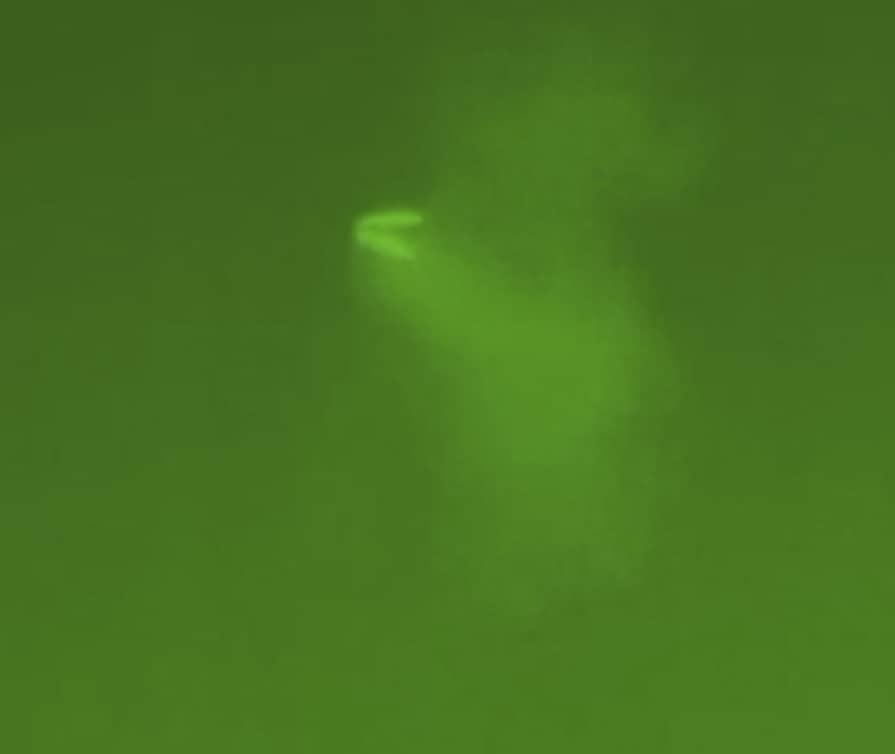 Right before this trip, FLIR donated to Ocean Alliance a Matrice 210. The Matrice 210 (P4) is a real workhorse, as against a recreational drone. It is water resistant, has a 35-minute flight time, expansion ports inculding power so you can add your own sensors  and a dual camera boom that lets me fly with paired cameras (you can also mount a camera on the top of the M210), so I could track the whale with the regular camera and know that the FLIR camera was seeing and recording everything that I saw. The goal was to look down the blowhole of a whale with a radiometric FLIR to determine the body temperature. 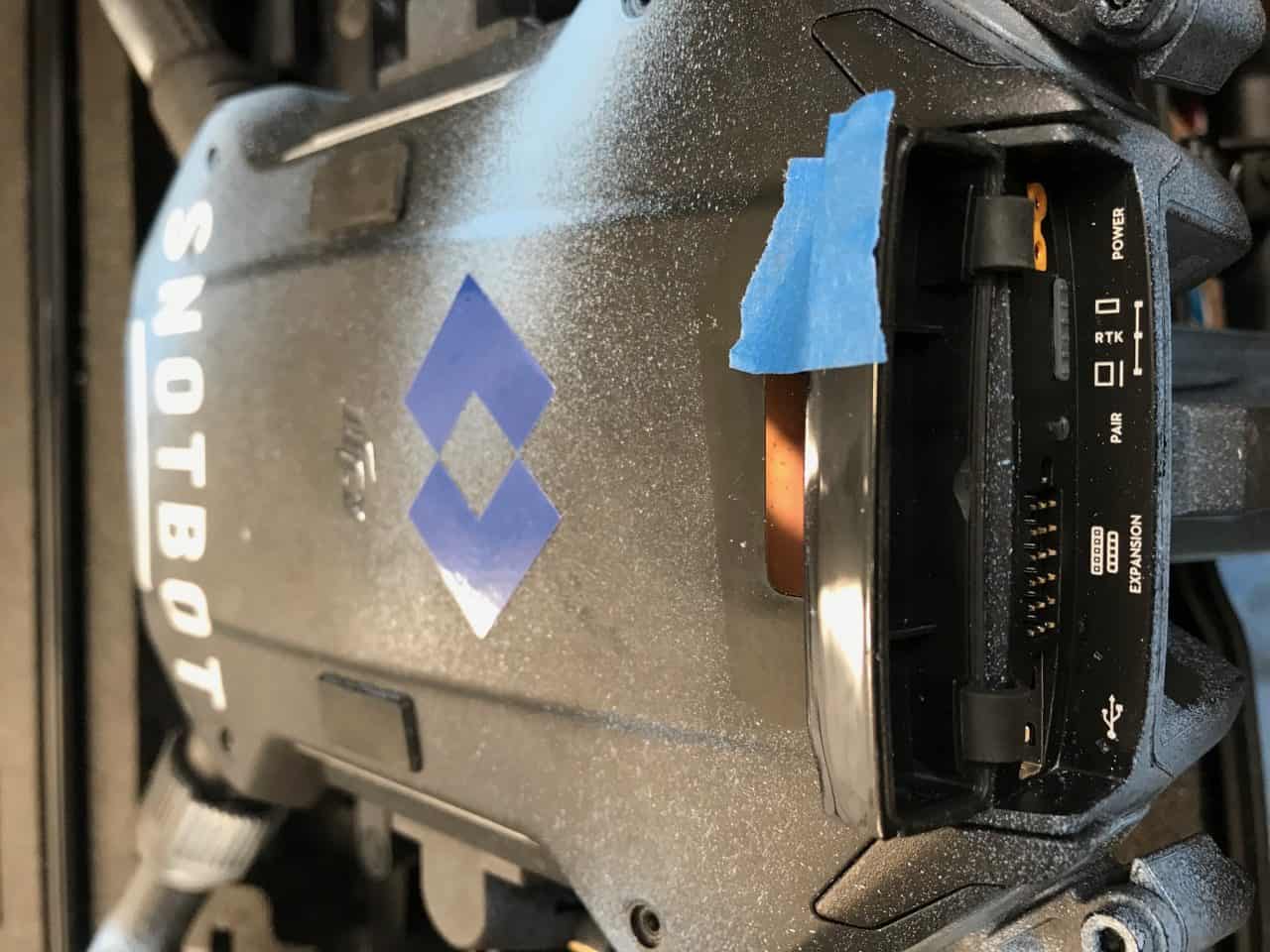 As with any new tech there is a learning curve, and I did not get the money shot on this expedition, but we did get the M210 above whales, and we know how and what to do for the next expedition.

The Matrice 210 also proved its value in San Ignacio Lagoon when we helped out whale biologist Lars Bejder from the University of Hawaii (Lars Bejder). Lars’s research includes the use of innovative technology to quantify fine‐scale habitat use, movements, communication, calf suckling rates and body condition of marine mammals. Alas, they had lost one of their suction cup tags. Lars told me that if we could get his tracking antenna up to approximately 100 meters in height we could extend the range of his antenna to approximately 20 miles and hopefully find his tag. We did not find the tag but the M210 Frankendrone performed flawlessly and Lars and Aude were grateful that we gave it a go.
Even with the lack of whales and bad weather we had a very productive trip data-wise.  Typically, we want samples from a lot of different whales; on this trip our goal was to spend more time with individual animals.  We collected multiple blows from the same animals to see if there is consistency in the data we are getting from the whale blows; for all we know the hormone levels are different in the first blow from second or third blows. The fact that there were so few whales would have been more disappointing scientifically had we not had this goal.

You have to be a cup-half-full type of person if you are going to be in the environmental preservation business. Thirty years of work, and whales face more and diverse threats than ever before, and our oceans are showing abuse at every level. That said, I believe that a change is coming powered by tools like SnotBot and our partnership with Parley for the Oceans.

It seems only appropriate to close this blog with another beautiful Christian Miller Blue whale mother calf photo. 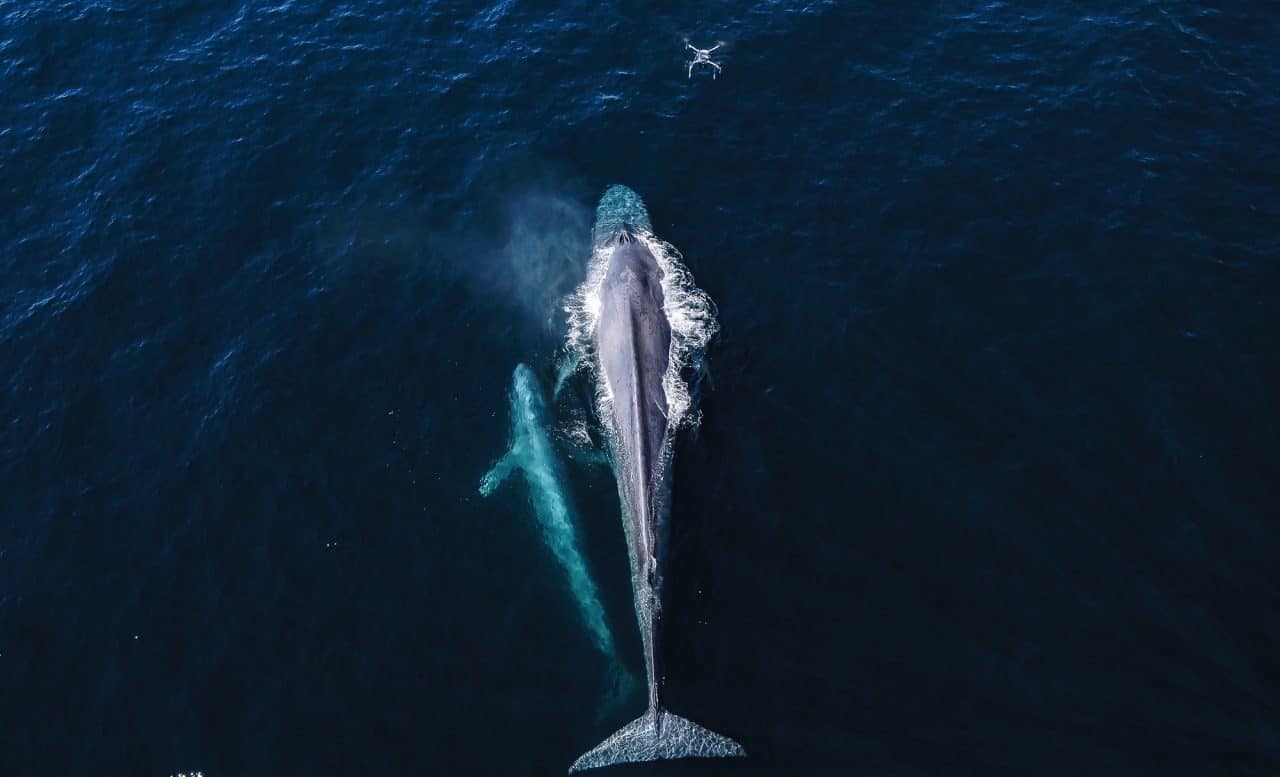 Thank you for being a part of this journey, coming up next is a blog from Andy Rogan.

As part of the expanded Drones for Whale Research Program we have some exciting locations and equipment already planned for Parley SnotBot 2018.  I look forward to introducing you to new tools/techniques/protocols and reporting back on the results of the data we have collected. Watch this page!

The sea is just drops of water that have come together. – Desmond Tutu