Offshore Chaos in the Gulf (Part 2) 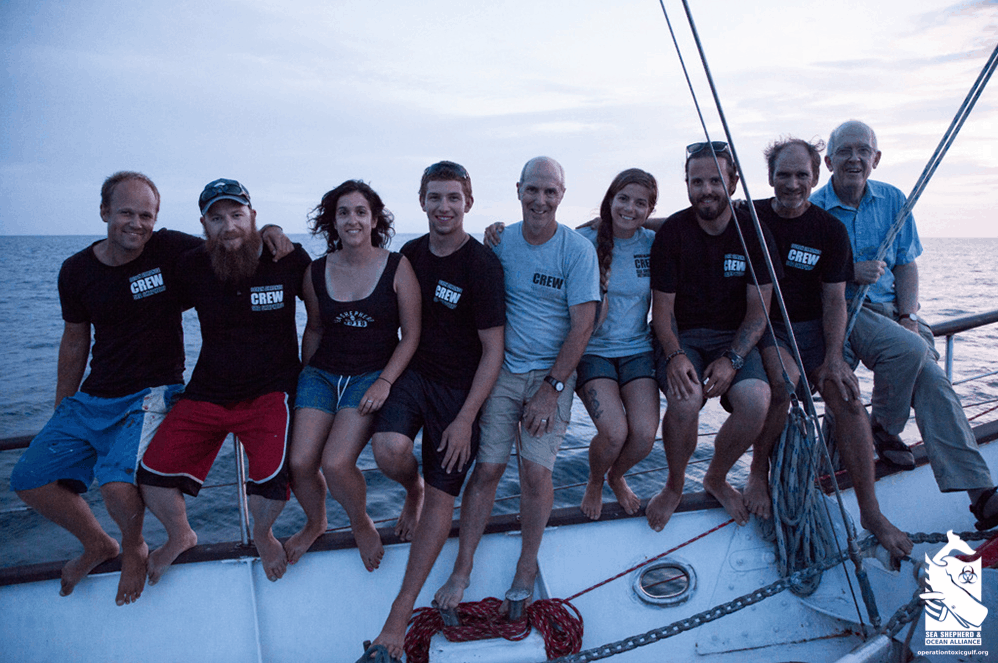 We are here to find out how those whales are reacting to the oil that got released during the oil blowout from Deepwater Horizon, and the dispersants that were sprayed on the oil to sink it out of sight (and out of mind) but that seem to be worse poisons than the oil itself. This is the fifth year of our research, and what we are already finding out is disturbing. 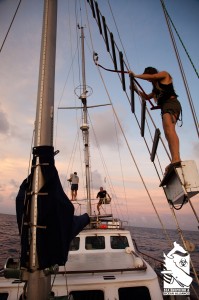 On board our boat are five crew from our partner organization, Sea Shepherd—all of them dedicated; all of them hard and willing workers; all of them unpaid volunteers, all of them good company. We arise at dawn to the sounds of sperm whale clicks drifting through the boat, and when we see the whale surface in the distance we drive over to it and use a biopsy dart to obtain a skin/blubber sample that we can analyze later for the poisons in it from the oil spill and the dispersants. Today we had perfect calm weather and got 8 biopsies. We will keep up our collection until we have at least 50 biopsies and will then return to analyze them for oil and dispersants. And we will publish those results so the world can find out what the true state of the Gulf is in the aftermath of the oil spill. Meanwhile we urge you to follow our progress. (I also urge you to judge for yourself whether it is safe to eat the seafood from these waters—something about which I’ll have more to say in the future.)

There simply has to be a better way to power cars than fossil fuels. For example; think electric cars or even cars powered by flywheels. The technology for powering cars with flywheels has been around for at least 30 years, languishing for want of major investment. The story you hear is that it is impossible to build a container strong enough to contain a flywheel that breaks. But in these times when new, super-strong materials are being invented every few months, it seems likely that such a container could be built. 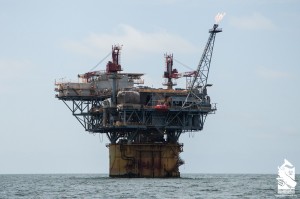 And a flywheel-powered car would not be some wimpy, spiritless ride; it would offer more acceleration than any one could ever handle. It would leave a state-of-the-art drag racer in its wake. Flywheels could be spun up by electricity from renewable power sources such as solar cells, wind power, tidal power, and wave power—all of them technologies bursting with promise but starving for the modest funding needed to commercialize them. Let our voices unite to promote change. It is inevitable—we simply need to enact change before the cost of repairing the ever-increasing damages caused by further delays become so great that there is nothing left to spend on inventing a better future; and that would sentence us to a world rendered all but uninhabitable by fossil fuels, and with climate consequences that no one would want to have to endure.

The positive side of working together is that the changes we need offer an abundance of jobs—good jobs: in design, in fabrication, in testing, in mass production, in sales, in modification of electricity grids, in rebuilding infrastructure, in adding recharging stations for cars. That’s the future. And it offers relief from oil spills and global warming and ocean acidification, and the flooding of coastal cities, and the disruption of ecosystems on a scale that humanity has never faced before and seems incapable of even imagining. We can reach a far better future; we just need to take the first step… which is to believe that there are changes that will create a better world, and then to start moving forward to achieve them—moving forward together. Working together. TOGETHER! Always together, and never forgetting that; “The people united, can never be defeated.”
[Part 1 of “Offshore Chaos in the Gulf can be read here]