One of the greatest threats whales face: and what we are doing about it

Since Dr. Roger Payne’s discovery that humpback whales sing songs to our bio-acoustic programs today, noise pollution has been an increasing threat that we are addressing to protect whales.

Whales and dolphins live in a world of sound. For humans, our primary sense (for the most part) is sight. It is the main way we observe our surroundings. For whales, it is sound. Sound is a much more effective medium in the ocean: it travels much faster in water than in air and can travel over vast distances.

But this also causes problems. Humanity is filling the ocean with sound. And because these sounds travel so far, there is nowhere for whales to hide. Noise pollution undoubtedly represents one of the biggest threats that whales face today.

Broadly speaking, there are two ways in which noise pollution impacts whales.

First, there are short and extremely loud noises that can physically harm whales, potentially causing them to go deaf and even cause them to strand on coastlines. Sources of such noise include sonar and seismic surveys.

Second, there are noises that are quieter but are constant and ever-present. Most of this noise comes from shipping – primarily from giant ocean-going cargo ships. The United Nations Conference on Trade and Development (UNCTAD) estimates that roughly 80% of global trade by volume and 70% by value is transported by see. Consequently, noise from shipping fills the ocean. Because the ocean is now such a loud place, it reduces whales’ ability to use sound to perform essential life functions such as foraging, finding a mate, communicating with one another, and evading predators. We call this acoustic masking, and while it doesn’t kill or harm whales outright, it could be reducing their chances of survival considerably, over time. Imagine if someone was constantly shining lights in your eyes. It might not hurt, but it would certainly make life more difficult. It is a death by a thousand cuts.

But there is a significant challenge to understanding the extent of the impact of acoustic masking on whales.

When a number of whales strand on beaches and die after a potential causal event such as a naval exercise using sonar, we can count them and conduct necropsies, and that way can begin to understand the severity of the problem. We then go to policymakers and government officials and say: here is the proof: the number of whales killed. We can then try and convince them to make laws and rules designed to protect whales from these threats, such as not using sonar in critical whale habitats.

But we cannot do this for acoustic masking. Acoustic masking hurts whales by reducing their ability to perform essential life functions over their whole life. Rather than making any single moment more difficult, it makes every single moment slightly more difficult. And this makes it extremely difficult to understand. Unlike more direct threats, we cannot count the number of whales that have been killed from acoustic masking, and we cannot quantify just how much of an impact it has had upon them. This makes it very dangerous. By slowing reducing whales’ ability to survive, it is a silent, insidious problem.

Part of the challenge in understanding this problem is that we don’t have baseline data: we don’t know how whales behave in a quiet ocean. When scientists started becoming more aware of acoustic masking, the ocean was already full of human-made sound.

Because of this, we think that it is critically important to speak out about this silent killer: while collecting data, educating people as to the nature of the problem, and supporting those who are looking to mitigate it. 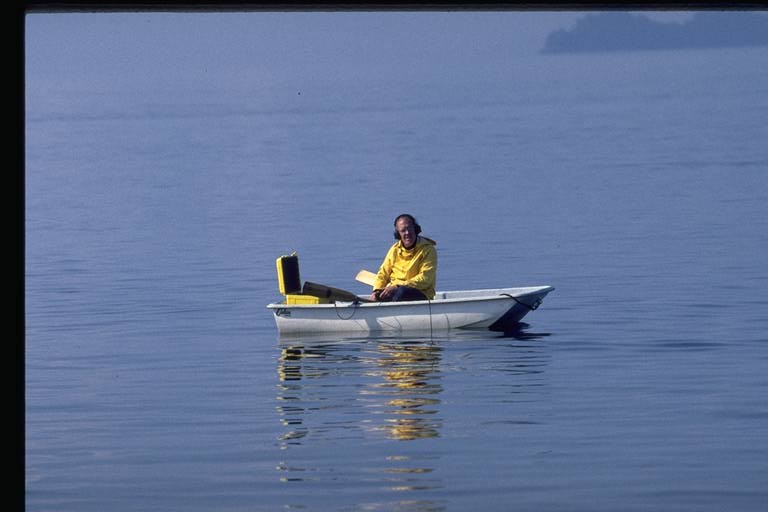 In 2020 we were given an extraordinarily unique opportunity to study acoustic masking, as noise levels in many areas of the ocean plummeted. This drop was caused by the COVID-19 pandemic, which resulted in fewer boats and less human activity in the ocean. For many whales, this might have been the first quiet time of their lives.

In response to this, Ocean Alliance quickly initiated a program to take advantage of this unique situation. The main questions we wanted to ask were: how do whales change their behavior in a suddenly quiet ocean? Do they communicate with one another more, and does the complexity of these communications change? This was a once-in-a-lifetime opportunity to collect this priceless baseline data.

We achieved this by heading onto a humpback whale feeding ground (Stellwagen Bank – the Gulf of Maine) dropping a hydrophone into the water and listening in on the world of whales. In 2020, we collected 25 recordings between 30-60 minutes in length. In 2021 we will conduct the same program. In this way, we will have two identical datasets: one collected during a quiet ocean (2020) and one during a typical ‘noisy’ ocean (2021). We can then compare the differences between the two.

This work is part of a broader program, an international collaboration of research groups that are collecting similar data. Alaska-based research group Sound Science Research Collective coordinates this work, with datasets being collected in multiple locations in Alaska, the Gulf of Maine, and Iceland. This is important because more data encompassing more areas with differing noise levels will lead to a far better understanding of the problem.

Our preliminary analysis of the data has been very interesting! We have found as much as a 3-fold decrease in noise (in areas where we had a baseline comparison). This meant that we were able to hear some sounds and call types that we have never been able to hear before!

Click here for a 2-minute sound file recorded during this research program. During the first minute you can hear humpback whales and Atlantic white sided dolphins. In the second half of the recording (which was recorded about 20 minutes after the first in exactly the sample place), a boat is going through the area. The difference between the two is clearly enormous. This isn’t a scientific analysis, because the whales and dolphins might easily have been much closer to our hydrophone during the first half of the recording. Still, it shows just how loud one boat can be.