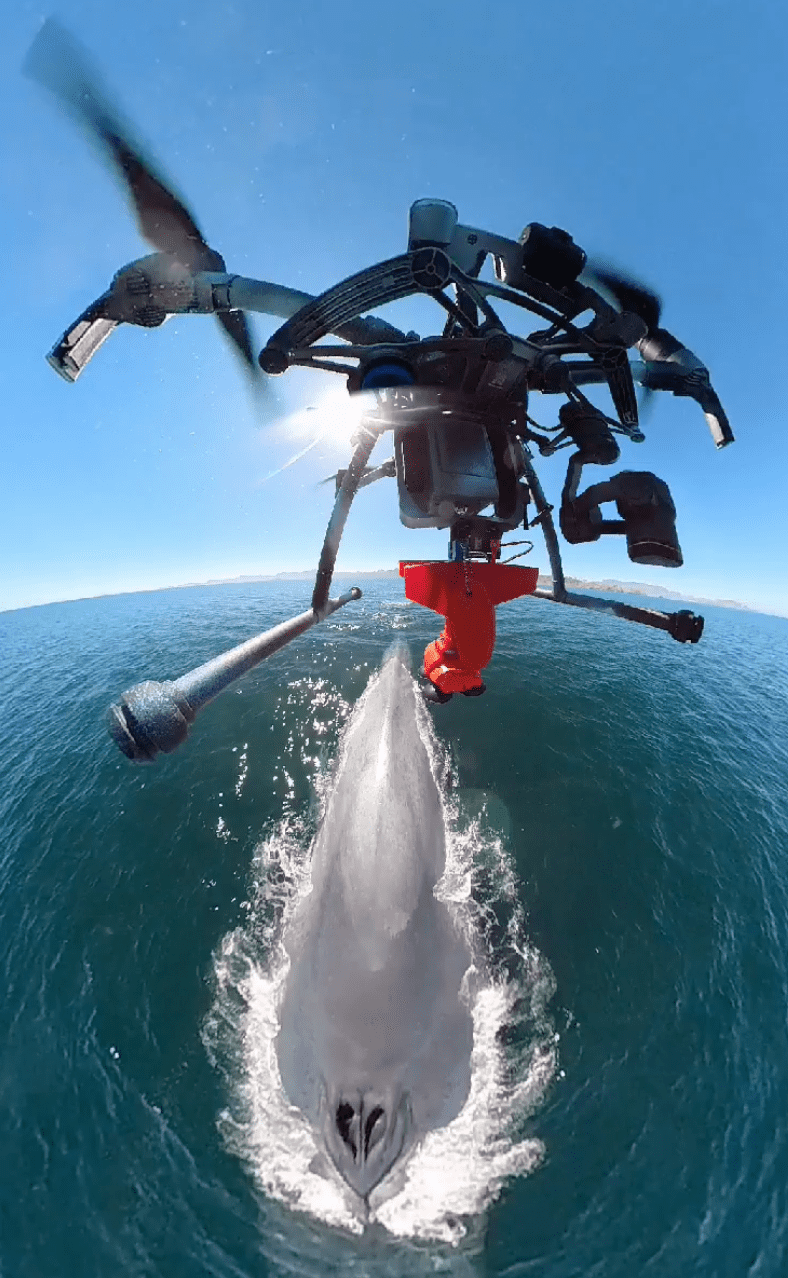 One of the most important tools in whale research right now are data tags. These tags stick onto the back of a whale with suction cups (typically for around 24 hours) and give scientists enormous insights into how whales live their lives. Depth, speed, orientation, acceleration or deceleration, water temperature, acoustics, and even cameras! The challenge with these tags has been attaching them onto the whale, right now this is done by a team in a small boat that pull up alongside a whale and attach the tag with a long pole. To be clear the current system works, but we wanted to see if we could make this less stressful and safer for whales and humans.  One of our scientific partners, Dr. David Wiley said:

“In the 25 years I have been tagging whales, we have always dreamed of being able to place tags on animals from the air.  The real-time aerial perspective allows whales to be followed underwater, be in position when they surface, and  quickly attach tags to them.  From the whale’s perspective, this alleviates the current procedure involving multiple approaches from vessels and replaces it with the less invasive approach of a small drone.  From the human perspective, it replaces the need to close approach unpredictable, large animals at sea and safely substitutes a reliable remote attachment.  It’s a game changer for whales, people and science”

Developing a system to attach a tag to a whale using a drone has been both a challenge and a good fit for Ocean Alliance’s skillsets. Over the next few weeks, we will tell you more about how this project has come together and take you with us on an expedition to Baja Mexico where we will attempt to attached both data and camera tags to blue whales.

Following are more results from our most recent tagging expedition….

We have been running some long days on the water collecting just incredible footage and data as we are developing our drone tagging tools, so my apologies for not sending out as many blogs as I usually do. Evenings are spent downloading data/video, checking settings, maintaining the drones and prepping the tags for the following days’ work.

It has been somewhat of a roller coaster here – which is often typical for wildlife research. We were stuck ashore for four days and then on day five we went out when we probably should not have gone out – the weather was still bloody rough – but we got a tag on. Then we are out from 10 am til 8:00 pm, ready to go back to it the next day starting just after 6:00 am – but we are loving it!

The team here, along with Dr. Dave Wiley have just been fantastic, everyone is giving their all. It has also been a real pleasure to work with people from the Loreto community, from our boat driver Flavio to Sea Land Charters. Dr. Jorge Urban from the Universidad Autónoma de Baja California Sur (under whose permit we are working) joined us out on the water for the last two days, which was fantastic. Jorge and I have known each other for over three decades, and after the many collaborations we have had over the years, it was great to get back out on the water with him again.

The only limiting factor we have encountered working with the blue whales off Loreto is that we are not allowed to fly when there are whale watch boats in the vicinity (and there are a lot of whale watch boats here)! But the diversity of wildlife down here along with amazing scenery of mountains dropping into the water and of course the whales – is just incredible – Dave Wiley said yesterday that he felt like we were tagging on the moon. In addition to the blue whales we are here to study we have also seen fin whales, humpback whales, bottlenose dolphin, pantropical spotted dolphin, common dolphin, sea lions, and a hammerhead shark!

So here is the breakdown of where we are work wise. Our primary expedition goal was to attach 10 tags the current number is 13 (whoop whoop)…and we still have 5 days of our expedition left ! That said, I think that bad weather may cut our time on the water to two or three days more. 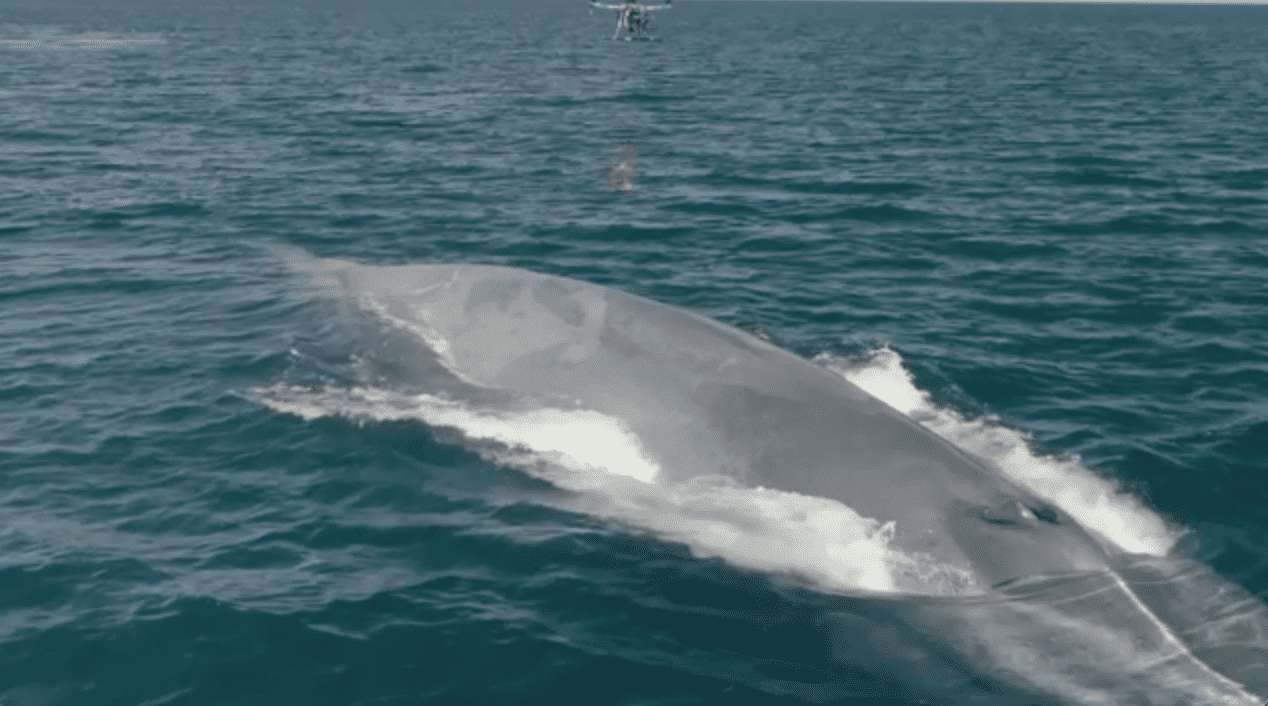 Yesterday we attached a CATS camera tag to a whale, and a couple of dives later Chris attached a DTAG on the same whale …..right in front of the CATS tag, so that we could observe any potential response by the whale as we attached the tag (none). We then tracked this animal (filming and collecting data) for almost two hours, which for a person who has not done tagging work before was a bit hair raising, what happens if the whale decides to leave for LA, can we track it will we ever find the tag with all of the data video footage when it releases? We have not looked at the DTAG data yet, but the video footage of the blue whale feeding is just spectacular.  We have looked at some of the dive data and it is just amazing, I am blown away by the tools that Dr. Alex Shorter (University of Michigan) and his team and Niko with his CATS tags have developed.

We have one small issue we with regards to sharing some of the video footage that we have collected with you: if we post any footage in social media or share footage with you then we cannot use this media for any scientific publications, and we think that we will have a minimum of three publications coming out of this data.

We are going out a bit later than usual today and will stay out until dark in the hope that we can attach tags to surface feeding blue whales, during the day the krill is down deep but towards the end of the day as we lose light the krill come to the surface (and the whales follow them!). 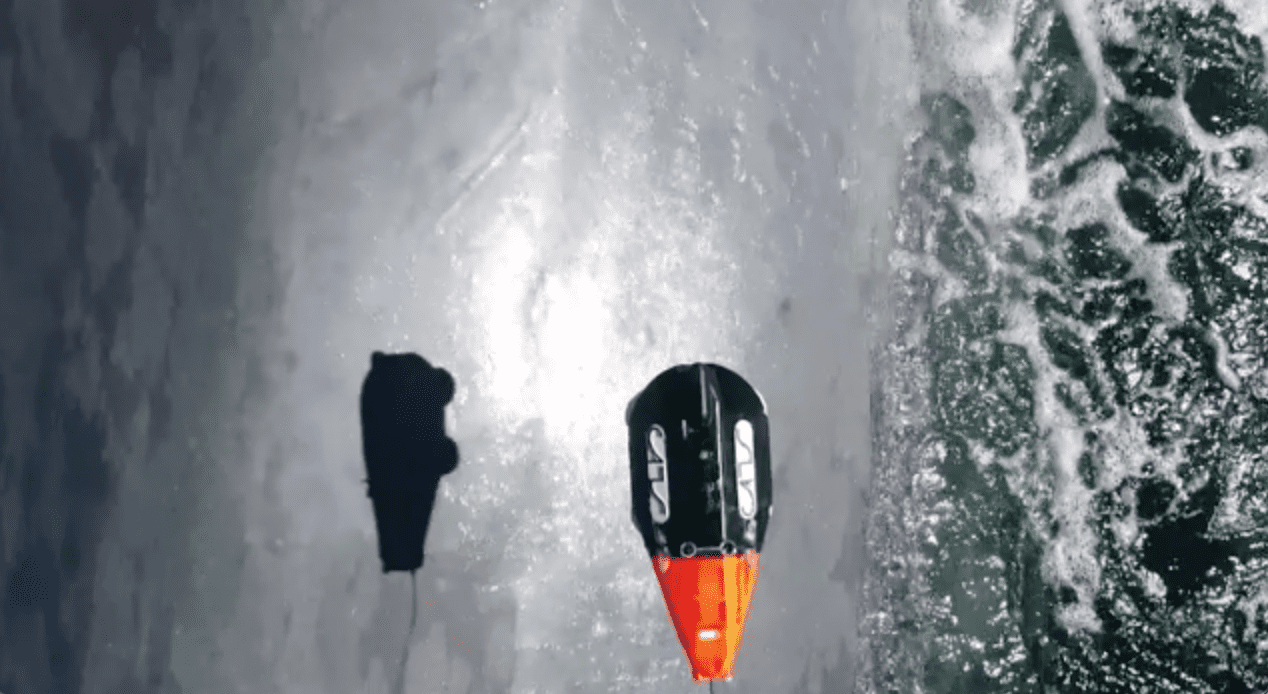 I have found the whole experience of tagging very different to SnotBot.  SnotBot is more mechanical, more consistent as we are on all day collecting as many exhalations as possible, Launch drone, collect snot, repeat. While the tagging work is no less stressful or difficult for me at least it is more cyclic. Spot whale, Attach Tag…yeaaa, track the whale through a few dives, wait (pray) for tag to come off (so far we are setting two hour tag durations) And repeat.  As part of the experimental process we have flown two different drones and deployed two different design tags along with two different design robots.

Sometimes I am amazed by the small world that we live in. OceanX provided us with the funding to develop the system (systems) to attach tags to whales using a drone. Our plan was (and still is) to buy a CATS tag.  Alas when I called up Niko the CATS Tag manufacturer months prior to the planned expedition he said that he could not get us a new tag until after the expedition. Hearing the panic in my voice Niko recommended that I contact Paolo Serge (at Stanford University) who had some CATS Tags.  I spoke to Paolo and just a few days later I had two (14K) tags sitting on my desk – I was a bit stunned by Paolo’s generosity and willingness to lend us this expensive equipment but I guess, like Ocean Alliance, Paolo is a serial collaborator. Yesterday Paolo e-mailed me after reading my last blog to say that he had acquired these tags through a grant from……OceanX, what a small world.  Thank You again…. OceanX!

All the best from the Baja SnotBot Tagging team!!