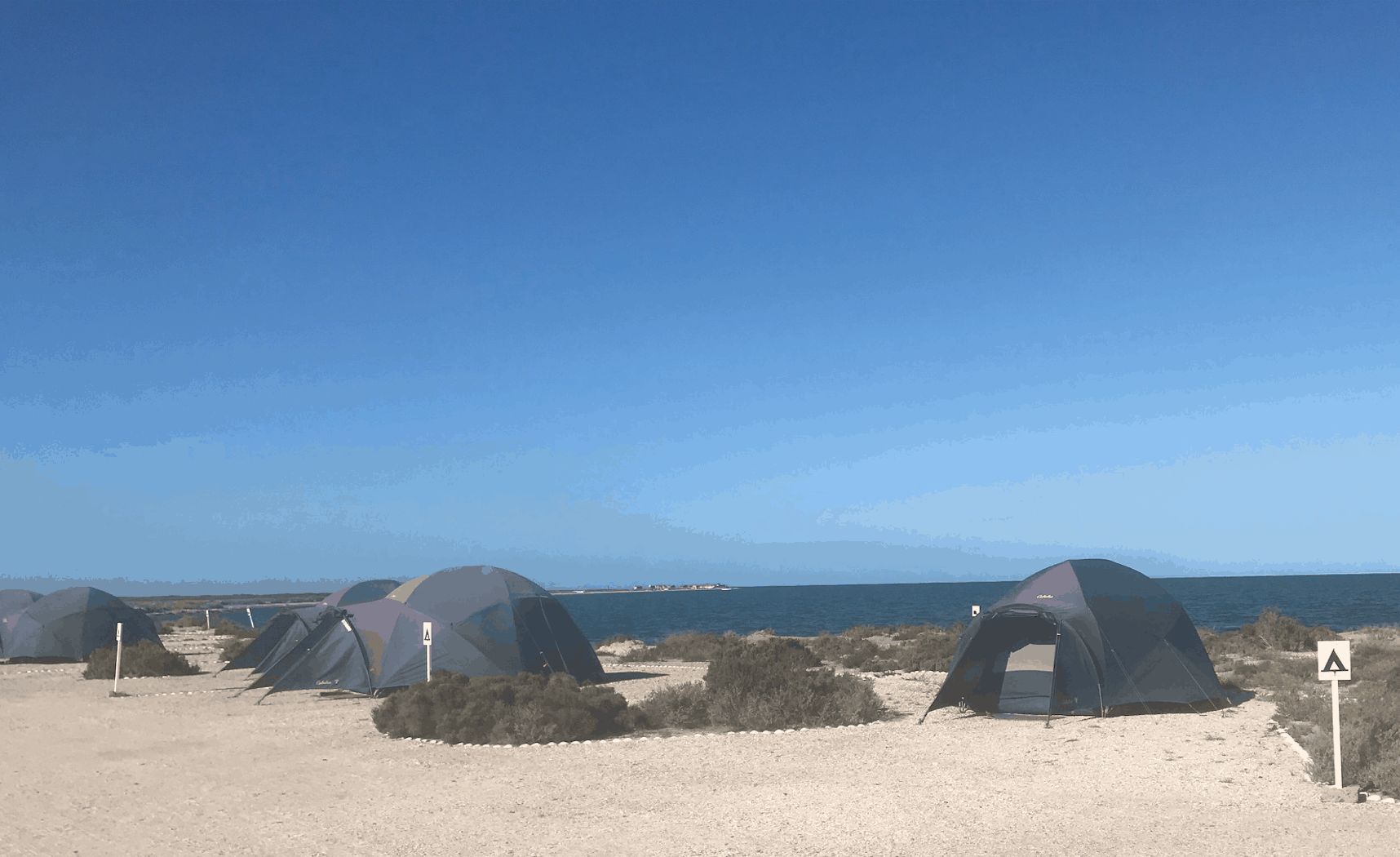 Dear Friends,
We are now in Loreto, Mexico after three amazing nights sleeping in tents on the shores of San Ignacio Lagoon. Our thanks go out to the University of La Paz and their gray whale program for their incredibly generous hospitality. San Ignacio lagoon is one of those places I urge all of you to visit. It’s a bumpy road to get there (literally) and accommodations are basic, but it is one of those special places where land and sea meet, and wildlife abounds.

We were there to test the newest addition to our Drones for Whale Research program, the FlightWave Edge. To date all of our drones have been multicopters: drones that hover on engine power alone and do not use any of their surfaces (like a wing) for lift in flight. Alternatively, the FlightWave Edge is an innovative vertical take-off and landing fixed-wing drone (looks like an airplane) that transitions into regular flight after take-off and, as a consequence, can stay aloft far longer and cover more ground. 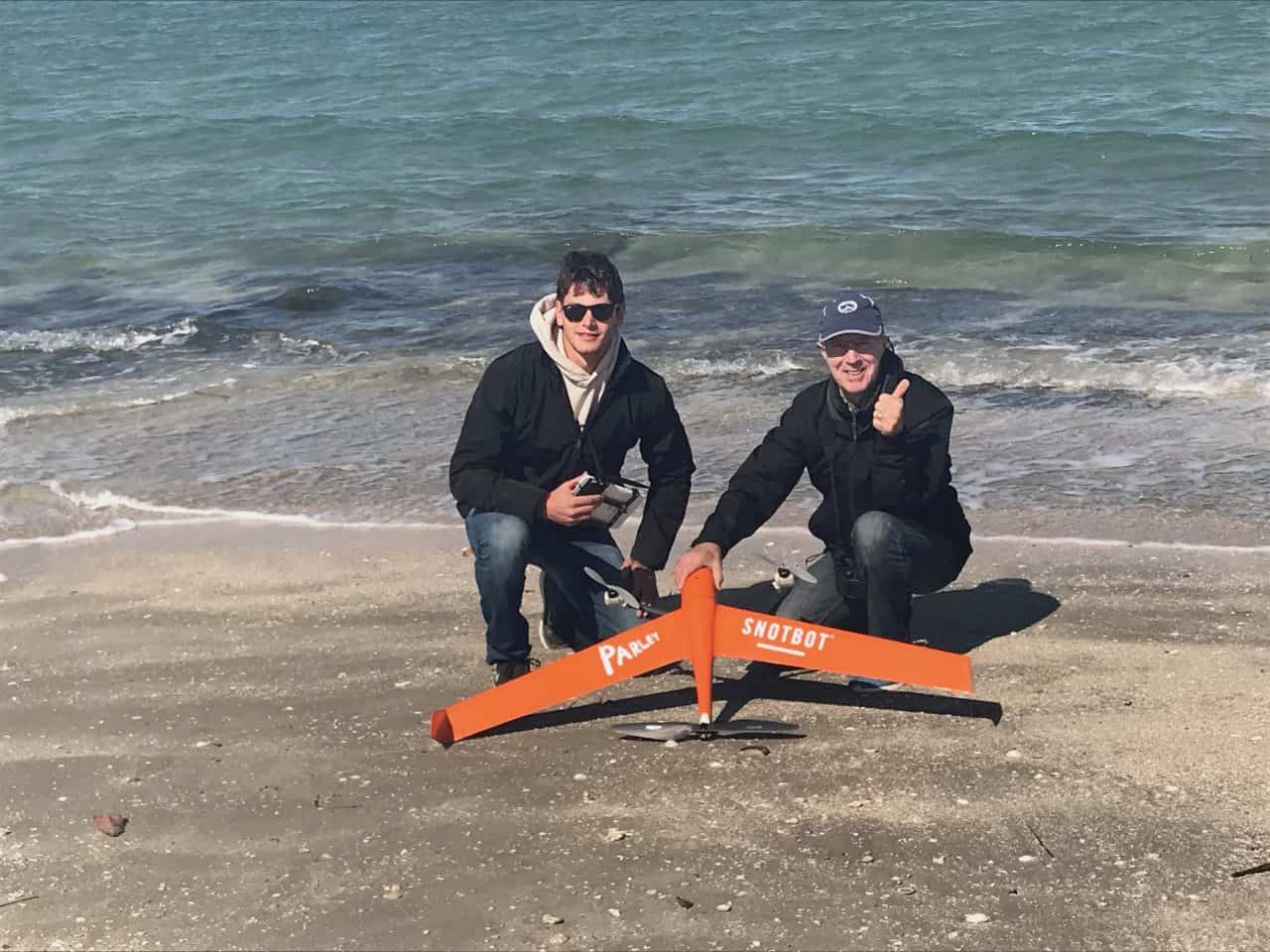 Photography has been the mainstay of whale research for over two decades. Rarely will you find a whale research program that does not include Photo-ID (photo-identification) as part of its research. With the introduction of drones into this formula, the use of video and still footage from drones has been a real game changer (i.e. INTEL collaboration), and I think that we are just touching upon the real potential of these machines. With the Parley SnotBot we have been comprehensively sampling individual animals in a population; the question we have always had when we are analyzing the data is: what percentage of the group did we sample? To date we have not had enough data to answer that question.

Distribution/abundance surveys (when we survey an area and count how many whales there are in an area and how they are spread across this area) are highly valuable data sets. Researchers can gain an accurate snapshot of how many animals are in a specific location, how they are spread across this area, and, crucially, how this distribution changes over time across multiple time scales: hours, days, weeks, seasons and even years. Currently this work is done with people with cameras on boats (which is arduous, time consuming, and expensive) or from airplanes (which are expensive, dangerous, and noisy).

After Parley SnotBot, we think that one of the most significant applications of drone technology in marine mammal science/conservation will be the use of cameras on affordable unmanned fixed-wing drones to conduct distribution and abundance surveys. Our oceans are vast, and to understand them we need data sets that reflect vast areas. In general, marine mammal scientists are only able to study the animals around them, i.e. within visual range. What about the animals beyond this range?
So, our mission on a remote peninsula in Baja was to put a fixed-wing drone, in this case the FlightWave Edge, through its paces. We ran approximately 14 missions, all with different goals and expectations. Some were long range tests, sometimes we were testing different flight configurations, practicing transitions between hovering and fixed-wing flying, and using the sophisticated mission planning software. We demonstrated the Edge to other researchers at the camp, and all were impressed. We were very grateful to Dr. Steven Swartz, who kindly coordinated a boat-based lagoon survey with our Edge survey, giving us context to the data we collected. We did not run the full 30K survey route, but we did fly over his boat (whilst on survey) and we did see a lot of whales. There is too much to report on here on what we learnt (and future plans!!), but I am happy to say that the Edge passed with flying colors. Our only limitations seemed to be the transmitter range and current BLOS (Beyond Line of Sight) restrictions, both of which are solveable. 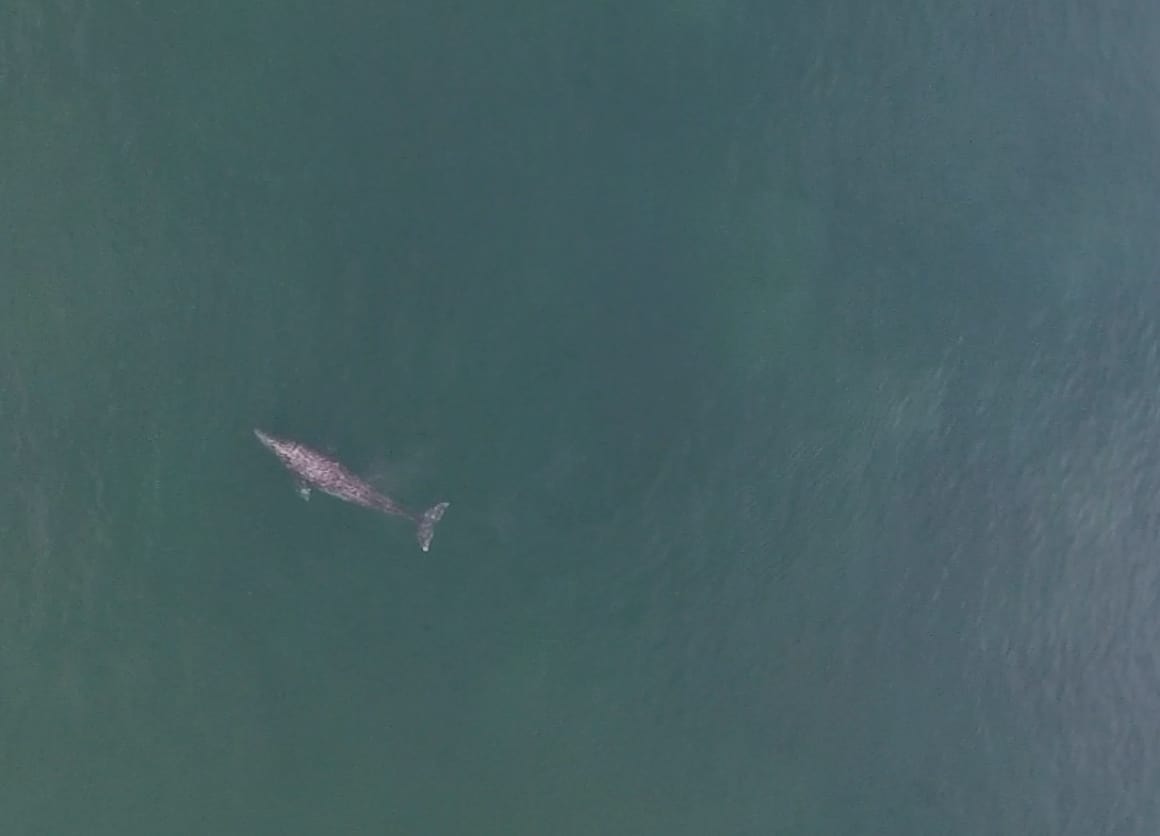 The photo above is an image taken from the Edge during the survey. Below is a photo of our shore-based launch site with cinematographer Christian Miller and Dan Levy. 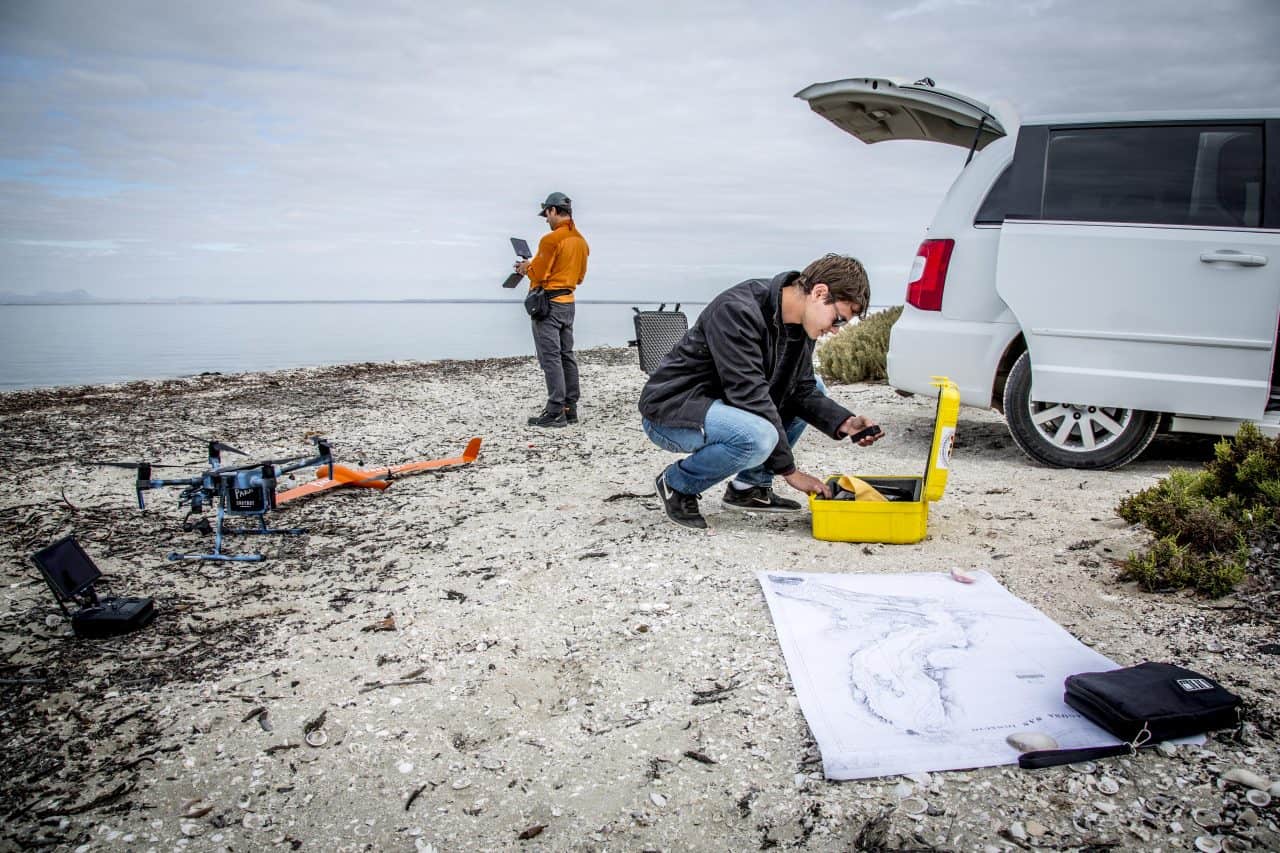 Dan works for FlightWave, and his participation was essential to our success – so thank you FlightWave and thank you Dan. Below Dan and I are putting the Edge through its paces. 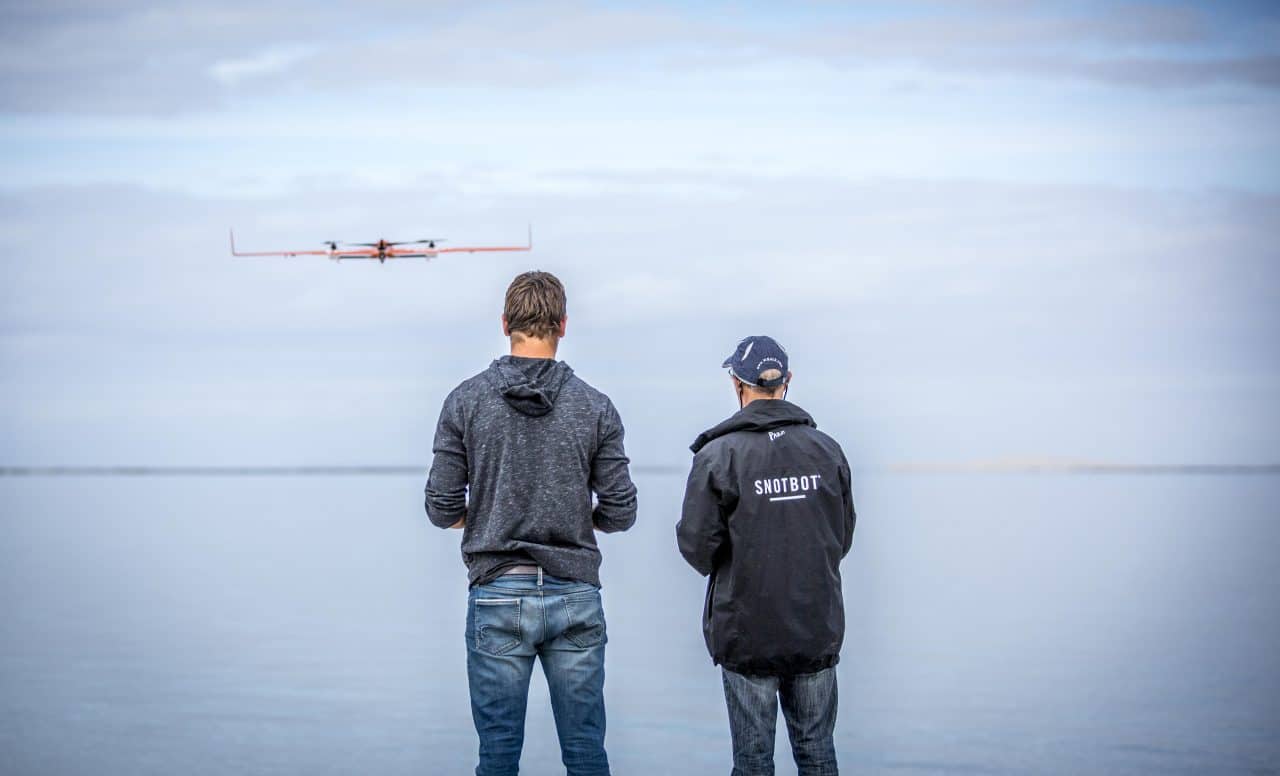 This next photo was meant as a calibration photo for the polarizing filter on the Edge camera but of course Christian made this into art. 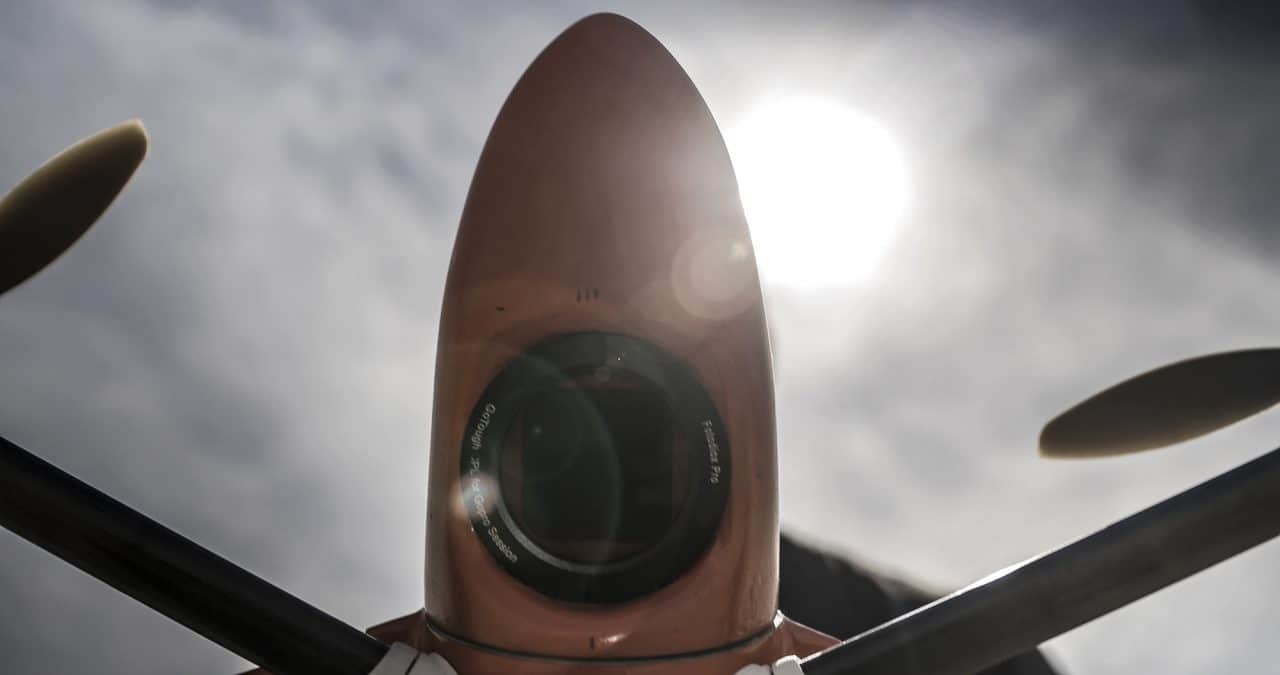 One of the shots that we really wanted to get was a shot of the Edge over whales. On the afternoon of day two, whilst sitting on the beach we realized this was near to impossible. The whales were over 2 kilometers offshore, and the Edge flies at 50 kilometers per hour. A remarkable team effort then ensued with Andy on the binoculars and Christian, Dan, and me trying to get a DJI Inspire 2 and the Edge in the same place over the whales at the same time. The flight capacity of the Edge really came into play here, we launched both drones at the same time, and after 25 minutes Christian flew his drone back to the beach, changed batteries and flew back out (2K each way) whilst the Edge waited in loiter mode. Loiter mode is when the Edge is on autopilot and flies in circles. We kept moving the loiter position until we hit the ball out of the ball park, and Christian, who had the Inspire 2 hovering over whales, saw the Edge fly through the screen – amazing!!! We expect the impossible from Christian Miller and once again he delivered. 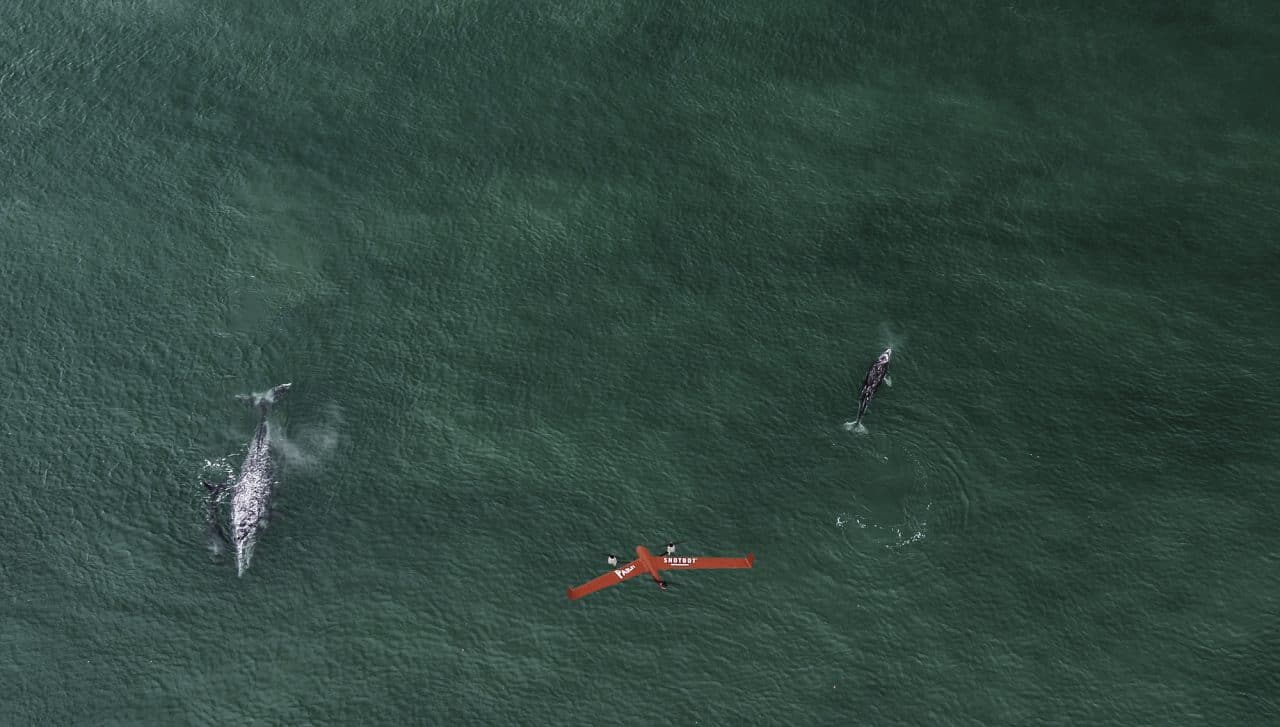 My life was made so much easier by having Dan with us in the field, as it turned out I think that Dan found the experience to be just as beneficial for his work:

When Iain invited me to go on this expedition I could not have been more excited about the opportunity to test the Edge under the real work challenges that the Parley SnotBot work represented. I don’t think that I realized how inspirational it would be for me to go from the factory to the field. I have spent years as part of the design and development team of the Edge, dealing with theoretical problems and potential pitfalls. This is the first time that I have been in the field and seen our ideas and our hard work put to the test. It added a whole new perspective to my thinking to see the Edge deployed so successfully and I am looking forward to getting back to work, to take what I have learnt to the Edge team so that we can support Iain’s work and many others out there like him.

Tomorrow we are out on the water with blue whales and a news team from HBO’s Vice News Tonight.

Best Fishes from Loreto in the Sea of Cortez.
Iain