Entanglement in fishing gear is one of the biggest killers of marine mammals worldwide. A 2006 study estimated that more than 300,000 whales, dolphins, and porpoises (all part of the same whale family, Cetacea) die annually after becoming caught in fishing gear. The authors of the study suggested the figure could be far higher, and as fisheries have continued to expand to meet a rising global population, this number has undoubtedly grown substantially.

Entanglement is a particular problem for the large whales that migrate up the East Coast of the United States and Canada each year and spend the summer months feeding in the nutrient-rich waters off the northeast coast. There are many fisheries in this part of the Atlantic Ocean, which means countless ropes, nets, and lines in the water in which large whales can become entangled.

The population of North Atlantic right whales (Eubalena glacialis) is particularly at risk. This endangered sub-species has an estimated population of 350 animals, and consequently just one mortality from entanglement has profound implications for the entire population. Over 85 percent of North Atlantic right whales show scars from entanglement and more than 50 percent of known right whale mortalities can be attributed to either entanglement or ship strikes. These staggering statistics are of great concern to those trying to protect this species.

The efforts of disentanglement response teams are imperative to the long-term survival of right whales and many other species. Disentangling a whale requires that a disentanglement team on a boat get close enough to the whale to sever the lines entangling it. Whales are large animals with immense power. In addition, they are likely to be under a high degree of stress when entangled, making their actions unpredictable and creating a potentially dangerous situation for the disentanglement team.

Disentangling a large whale is a complex, difficult, and potentially dangerous process. A high percentage of disentanglement attempts end in failure. Response teams must get very close to the whale in order to cut the lines that trap it. The whales are likely to be in an increased state of stress owing to their situation, and their movements can be unpredictable. These are large, immensely powerful animals that could do a large amount of damage to any vessels and humans nearby.

One major problem is that it can be difficult for the response team to understand the entanglement situation: How many lines are there, where are they attached, how is the animal moving, is there a particular cut point to aim for or fin that seems to be particularly affected? The disentanglement team’s perspective is very limited: The angle from team to whale and low vantage point means that they have almost no ability to see under the surface of the water. When they approach a whale to disentangle it, they must assess the situation and act extremely quickly for their safety and the safety of a whale.

This is where our drones come in. A drone offers a far superior perspective of the entanglement situation. The ability of an observer to see through the surface of the water increases with height and angle — for the best perspective you would want to be directly above the whale. A drone hovering a given height above the whale (approx. 50 feet) would provide a far clearer picture and understanding of the situation, which the disentanglement team could then use to evaluate the entanglement and plan their disentanglement strategy in a safer, more effective and more efficient manner.

Ocean Alliance is currently permitted by NOAA and NMFS to carry out this work. 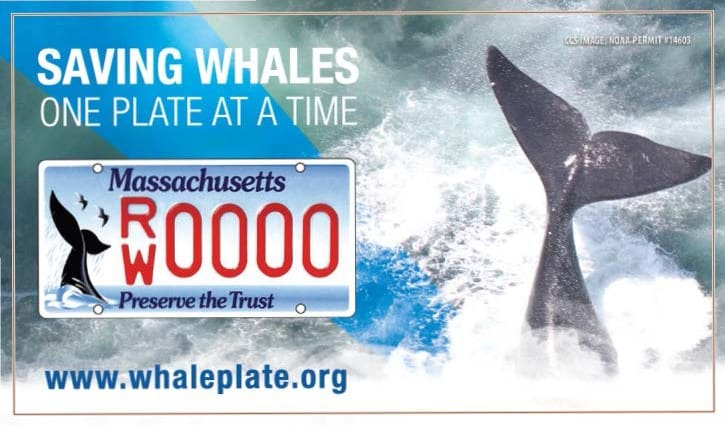 Our drone disentanglement work is supported by the Massachusetts Environmental Trust. The Trust will provide over $471,512.00 in grants to 18 organizations this year, thanks to motorists who choose to purchase one of the Trust’s specialty license plates. Supporting the environmental programs funded by the Trust is easy: choose one of three Massachusetts environmental plates, the Right Whale & Roseate Terns, The Leaping Brook Trout, or the Blackstone Valley Mill when you purchase or lease a new car or renew your registration with the Registry of Motor Vehicles.

The standard registration fee for a Massachusetts plate is $60.00. The special plate fee is an additional $40.00 (tax-deductible every two years) for a total cost of $100. Every time you renew your registration, the $40.00 goes to the Trust. Visit your local Registry of Motor Vehicles to order a plate online at www.massrmv.com or www.whaleplate.org. You can also visit us at www.mass.gov/eea/met to learn more about the Trust, the programs it supports, and the specialty license plate offerings.