Death of the Cryosphere

One of the devastating consequences of global warming is the loss of the so-called cryosphere—the frozen landforms and the ice that are present year ‘round in the Arctic, the Antarctic, and high mountains everywhere. One of the countries blessed with high mountains and glaciers is Iceland where the word for glacier is jökull. But now these precious stores of fresh water are thawing… fast—faster than anyone had hitherto predicted.

The Ok Glacier (Okjökull) has lost so much ice; its mass is no longer sufficient to overcome the friction with the ground beneath it and it no longer can move. It has also broken into widely separated fragments of ice scattered across the surface over which it once flowed. Glaciologists call such non-moving glaciers, dead glaciers and back in 2014, Icelandic geologist Oddur Sigurðsson was first to announce that the Ok had died.

Five years went by and then last summer, on the 18th of August a small group of geologists, academicians, artists, journalists and citizens assembled on the barren, rocky ground that Okjökull had once crushed beneath its massive weight, thereby dominating it completely. They had come to perform a memorial service—to erect a plaque bearing a message to future generations in two languages: English and Icelandic. The plaque reads:

“Ok is the first Icelandic glacier to lose its status as a glacier. In the next 200 years all our glaciers are expected to follow the same path. This monument is to acknowledge that we know what is happening and what needs to be done. Only you know if we did it.” 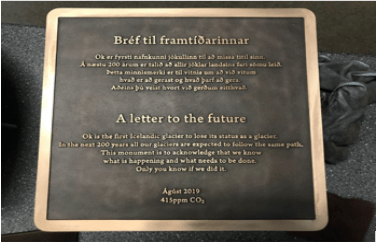 A spokesperson for the group, Cymene Howe, is an associate professor of anthropology at Rice University. She said the group had wanted to use the glacier’s passing as a call to climate action; “By memorializing a fallen glacier, we want to emphasize what is being lost and what is dying. We also want to draw attention to the fact that climate change is something that humans have accomplished… although it’s not something we should be particularly proud of.”

Ok is not unique; many mountains are losing glaciers. Kenya’s highest mountain, Kilimanjaro, is an example, as is Mont Blanc, the highest mountain in the Swiss Alps. Mont Blanc is losing the Planpioncieux Glacier which is draped over the Italian side of the massif of which Mont Blanc is a part. This glacier is at such risk of collapse that roads have been closed in the area and the glacier is now under constant surveillance by scientists using satellite images, radar, and time-lapse videos to look for any hints of imminent ice collapse. It is because the weather has been so warm of late; from 6 inches to 2 feet of ice have been melting daily.

Such losses are more than just Climate Change’s booby-prize awards to Homo sapiens (‘Man the wise’). They also cause the loss of crops and they can even trigger suicides by Himalayan farmers who have always relied on the slow summer melt of the glaciers high above their farms to irrigate late summer crops. But in several areas this is already failing; and sometimes the consequences are tragically fatal.

In some of these areas people now pile blocks of ice on plastic sheets in winter, insulating them with dry leaves and straw to slow the melting. When the rivers which used to run all summer cease, the water from the melting ice blocks becomes drinking water for villagers who live far below.

This was once a service that Nature performed for free. But the man made ice piles are too small to provide enough water for irrigation. They can only produce enough to cook with and drink. Of course, that means that food must be grown and carried uphill from lands farther down the mountain. It also means that people in higher villages can no longer be self-sufficient.

But, of course, they, like you and me, were never self-sufficient. All of us have always been entirely dependent on Nature. It’s just that we didn’t understand our dependency—didn’t like the messages that Mother Nature sent us about the need to change. So we killed her. It seems to be a uniquely human way of learning. It is also the very hardest, most painful, most incapacitating way to learn that the need is sometimes incontestably essential to change.

The cure for such wrongheadedness, in all of its forms and manifestations is the same: learn quickly. If you find the truths that demand that you change distasteful, don’t drag your feet. Act! Act quickly, and you will suffer far less than your neighbors who dislike so much any message that demands change that they are killing the messenger.