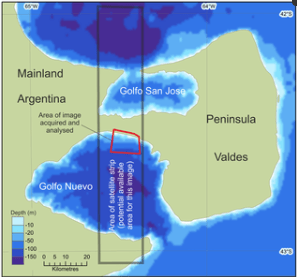 During this year’s Our Ocean conference in Oslo, the New England Aquarium and the Cambridge-based not-for-profit engineering company Draper announced a new initiative to count whales from space. The $1 million project will focus on developing technology to detect large marine life in areas of the world that are difficult to survey using traditional techniques

We think this is a great idea. In fact, back in 2013, Ocean Alliance’s Southern Right Whale Program was involved in the first successful study using satellite imagery to count whales. The study identified and counted southern right whales breeding in part of the Golfo Nuevo, Península Valdés in Argentina. using very high resolution imagery from a WorldView2 satellite. An article about this southern right whale study appeared in the scientific journal PLOS One in February, 2014.

While the costs for the Aquarium-Draper project are high, this is the type of technology and use case that could have profound effects for whale and ocean conservation in the future.