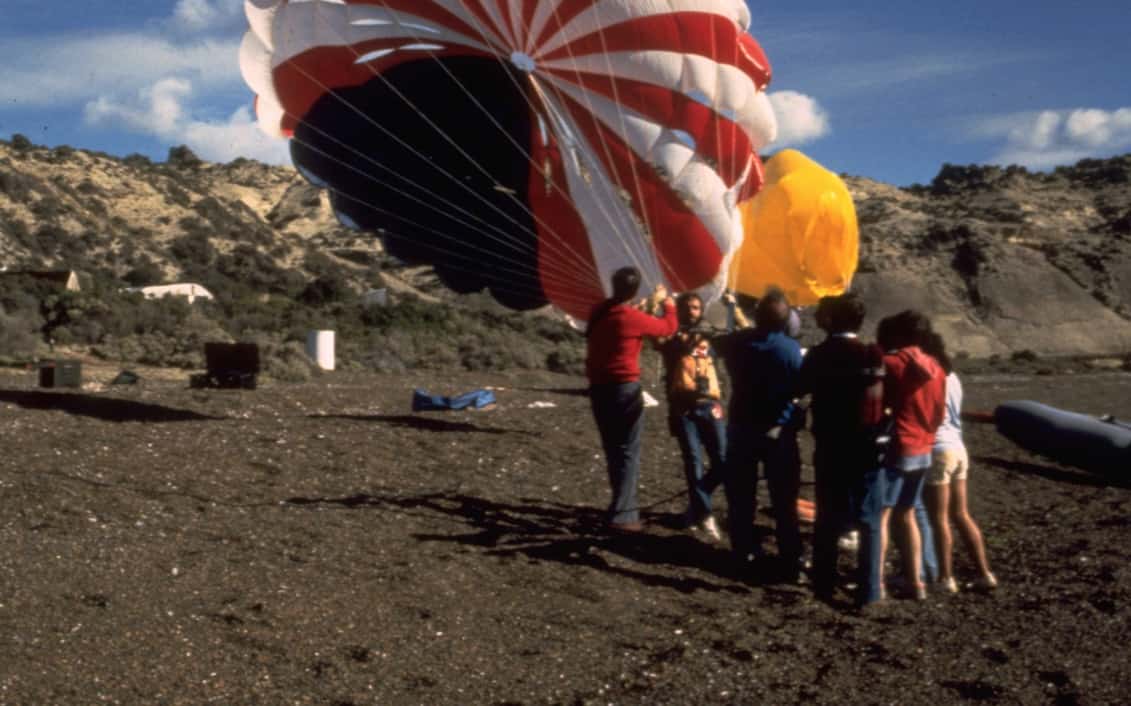 It was 46 years ago that I first saw right whales off Peninsula Valdes in Patagonia and started the study of their behavior that Ocean Alliance has continued without a break to this day (making ours the longest continuous study of a whale species based on known individuals). In that first year I watched the right whales from a high cliff and when they came beneath it could see through the water exactly what they were doing and in perfect detail. By filming the patterns of white markings (callosities) on their heads, I could also tell who they were. However, because they were almost always on the move the perfect views from above never lasted more than a few minutes. We could run along the rim of the cliff for a while, looking down at the whale but it was both exhausting and dangerous as any misstep would plunge you headfirst onto the rocks, 150 feet below.

By accurately plotting their positions with surveyors’ theodolytes we later found that at Penìnsula Valdès, right whales prefer to be in 5 meters of water—not 4½ meters or 5½ meters but 5 meters of water. They stick to that depth tenaciously in our study area in Golfo San José. In fact, I have never seen a more sharply tuned behavioral preference for water depth in any whale species. It was clear that if you could observe from overhead the whales could not get out of your sight because of their strong preference for water that is only 5 meters deep—a depth through which you can see the whale’s entire body.

For all those reasons, from year one I longed to observe right whales from the air. Sure sure, underwater observations were possible, but whenever you approach closely, the whales either leave at once or stop whatever they are doing and come over to examine you closely—often, they try to intimidate or dominate you as well. It is all very impressive but you see nothing of the whale’s normal behavior, which is why you are there in the first place. Because it was so clear from the start that aerial observations would enable us to make huge advances in understanding right whale behavior, we tried in that first year to find a helicopter we could afford to charter from which we could observe the whales’. But neither then nor later could we find one at a charter price we could afford. Years later when we were cooperating in the filming of an Imax film, we did finally have the chance to keep a chartered helicopter at whale camp for 10 days. The views we got from it were great but we had to observe from much further away, since helicopters disturb right whales much more than the fixed-wing planes we were used to.

For years I simply yearned to have a model aircraft that could carry a TV camera. I was sure it would be able to get closer without disturbing the whales and that would give us better results. However, none of us had the skills to operate such a machine and it was clear that learning to do so and keeping that skill honed would be a full time occupation—hard to accomplish since there is a long roster of other things that demand one’s full attention during our all-too-short field seasons. (The photo above shows another attempt by Roger and Iain to Roger to observe whales from above, in 1987, with a parasail and balloon.)

As time passed affordable drones finally began to appear. In 2006 I had the luck of meeting MIT Professor Daniela Rus, two of whose former students had developed a very successful octocopter called the Falcon. We took it and them to Argentina in 2008 and tried it out as a tool for observing right whales. The results were stunning. First off, as long as we kept the downdraft clear of the the whales they simply ignored the drone. Here’s an example of what you can see from a small drone when above a right whale: 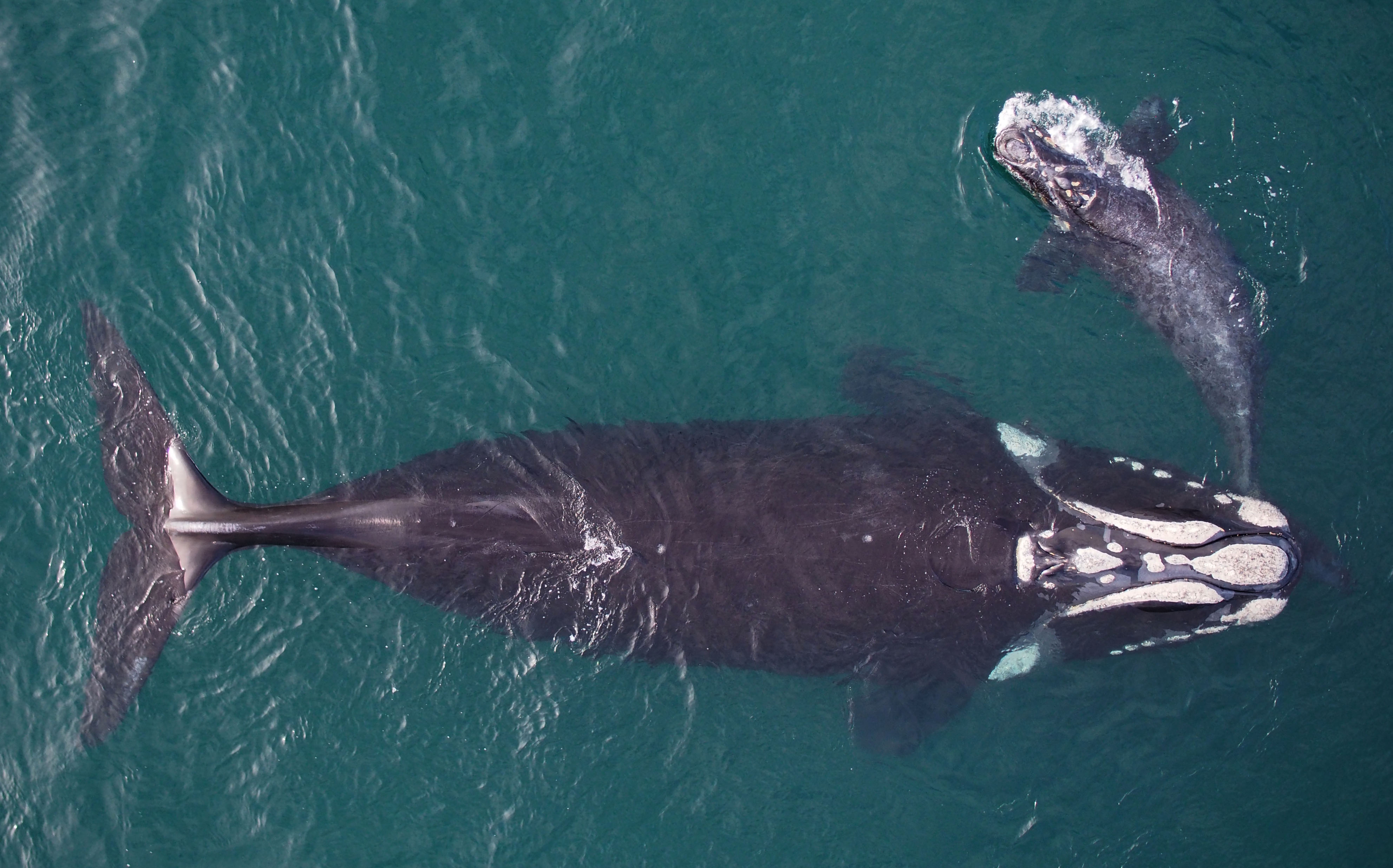 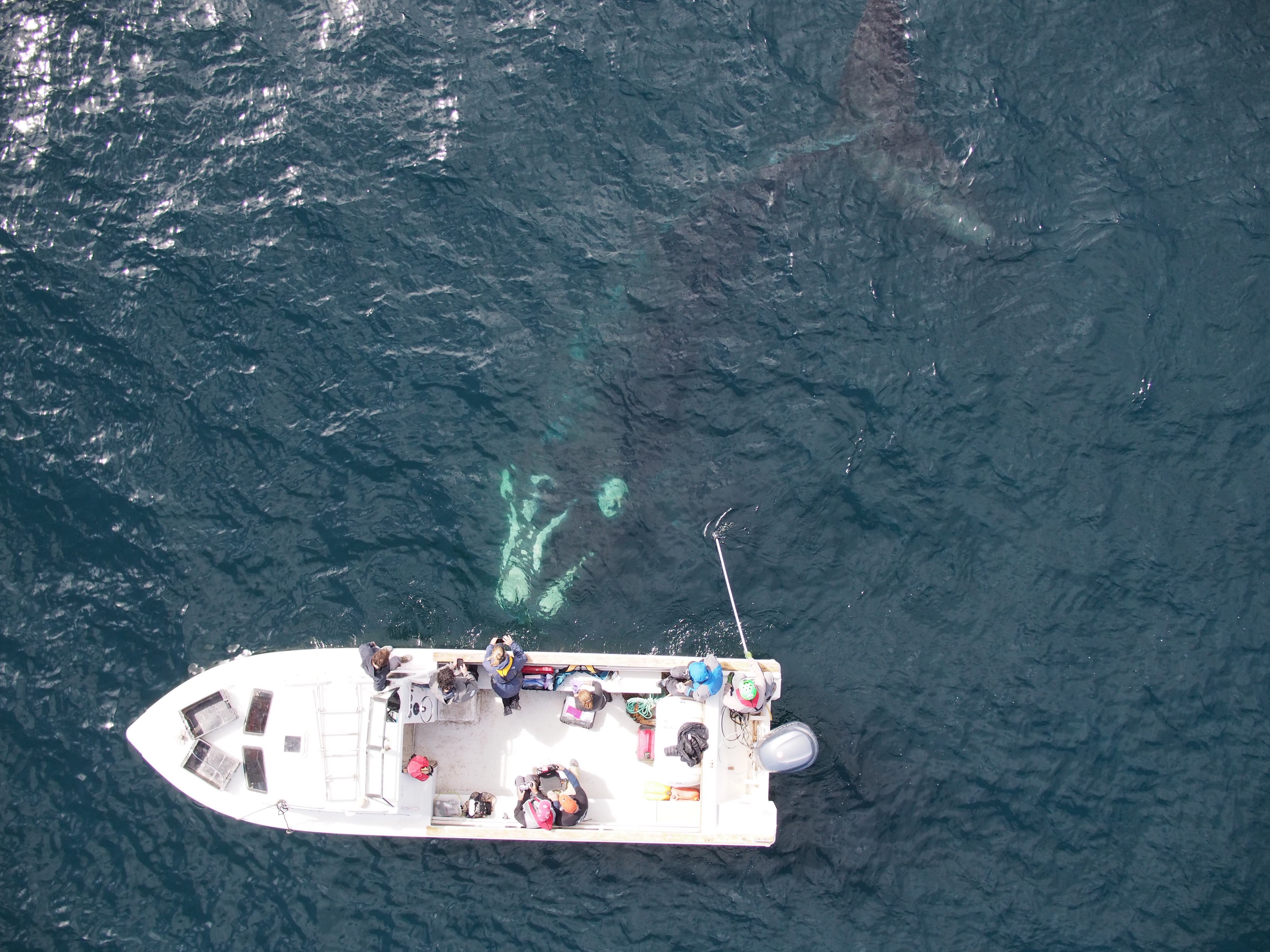 At the same time Iain approached Professor Andrew Bennett at Olin College of Engineering and they began building what they dubbed the SnotBot, (one of my least favorite names but a great machine that collects blow samples from right whales, subsequent analyses of which enable you to learn about the health and reproductive state of the whale). Iain is currently off doing this work on the second of three expeditions that Ocean Alliance funded through Kickstarter.

While all of this explosive development was going on Iain was spending evenings and weekends learning how to fly drones in his back yard, and the result of that effort made it clear that the dream of studying behavior of whales with drones is now a reality.

Allow me to go out on a limb and predict (in the spirit of Moore’s law) a trend in the amount of information one can get by using drones: I predict that the number of papers on whale behavior based on drones will roughly double every three to five years—thereby tempting one to conclude that if you want to learn about whales, don’t waste your time on, or in, the water, get up in the air.

However, everyone who does accept the challenge of designing drones that can operate in the far-more-difficult world of underwater observations will find that the amount of data they can get on whales will increase even faster. I suspect that in a few more years the explosion of papers based on underwater drones will be increasing at twice the rate of papers based on aerial drones.

I have often felt that by great good fortune I was born at a time ideal for learning more about whales. However, I now feel that an understanding of the world of whales is only in its very earliest, most primitive beginning phase and that its full fruition will come as a result of both aerial and underwater drones—rather than from observations by divers or from shipboard. 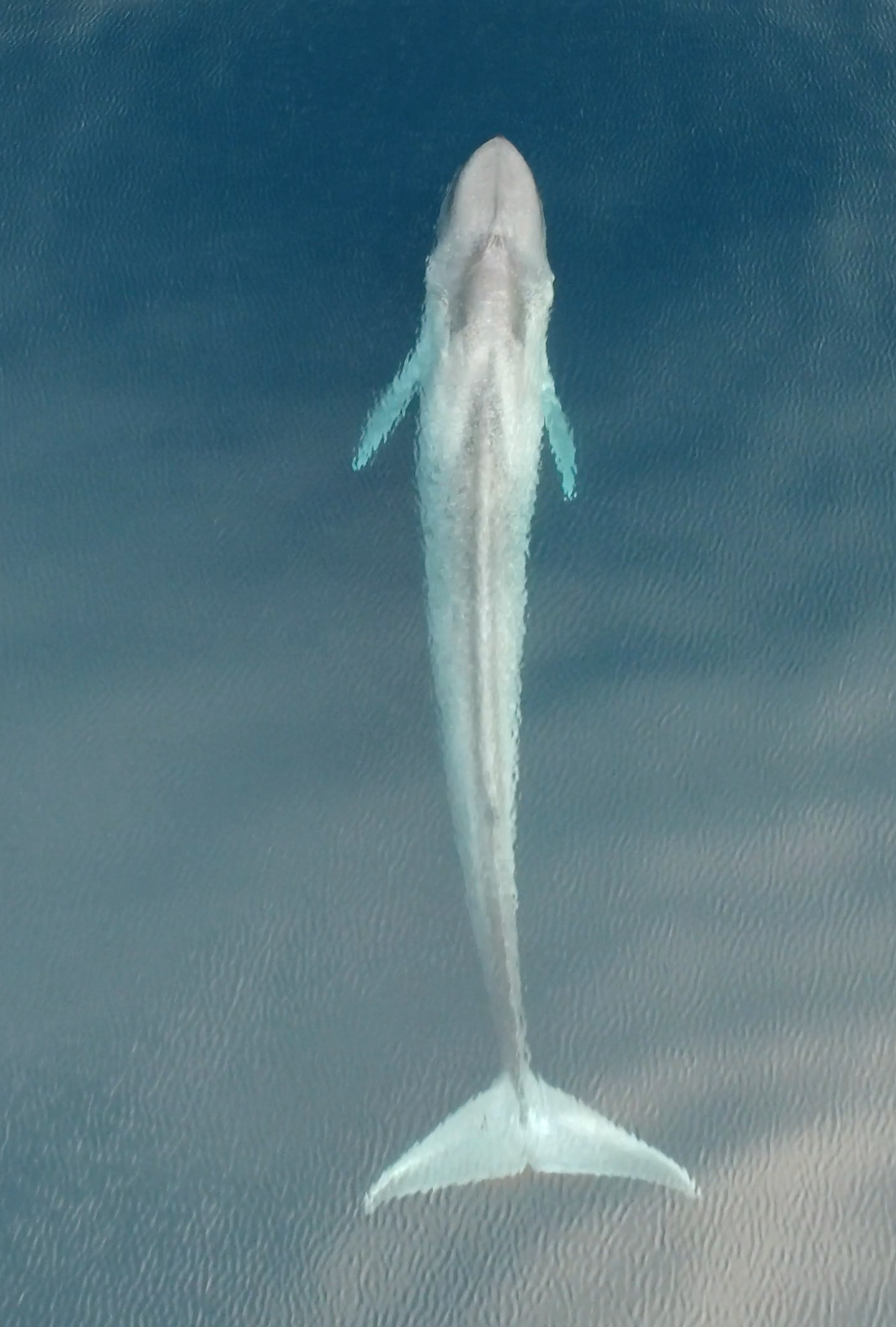 Roger Payne is the Founder and President of Ocean Alliance.