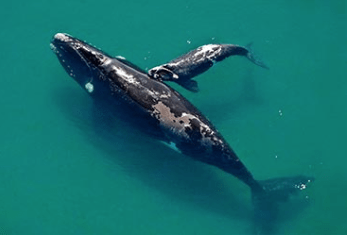 For 47 years, Ocean Alliance has studied a population of right whales that uses the bays of Península Valdés in Patagonia as a nursery ground; for the past almost two decades we have been doing the research with our sister organization, Instituto de Conservación de Ballenas (ICB), in Argentina. It is the longest continuous study of any great whale based on known individuals. In that time, our researchers have gotten to know the whales very well.

Take Docksider (above), for instance. Researchers know four generations of this whale’s family. Docksider’s grandmother was identified in 1971; her mother, Antonia, was born in 1975, and our researchers have known Docksider since her birth in 1987.

Researchers discovered Docksider was a female when she appeared with her first calf (a male named Espuma) in 1994. In the photograph above, Docksider is with her 2006 calf, Luna.

Every whale is unique, and every whale has something to teach us. Only by learning about the lives of these animals can we begin to understand how to protect them. Providing funding for researchers and equipment for this kind of long-term research does not come cheap.

You can support our Southern Right Whale Program by adopting one of the right whales here.

You can also support our SnotBot and Drones for Whale Research programs by donating to Ocean Alliance or by adopting one of the humpback whales that spend their summer in the waters off our headquarters in Gloucester, Massachusetts.