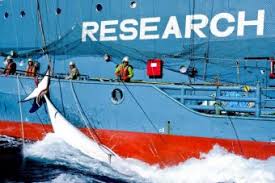 On the day after Christmas, Japan made an announcement that she would be quitting the international Whaling Commission (IWC) and that this year would be her last year of whaling in the Antarctic. I wrote a blog about that but later saw one by Sea Shepherd founder, Paul Watson that made a point about which I wanted to comment. This blog is that comment.

As she announced her intention to drop out of the IWC Japan said that her intentions are to do commercial whaling and to whale only in her own, North Pacific waters. Two Australian ministers (the Foreign minister and Environment minister) said they were’ “extremely disappointed” with Japan’s decision,” a sentiment that was echoed by New Zealand.

The Australian Humane Society pointed out that Japan would be “operating completely outside the bounds of international law,” and the director of Greenpeace Japan said that “The declaration today is out of step with the international community, let alone the protection needed to safeguard the future of our oceans.”

All of these comments were similar to many from similar sources in the past, but I felt that the remarks by Sea Shepherd founder, Paul Watson were the most interesting. He suggested that there were five reasons why Japan decided to leave the IWC:

1. Increasingly aggressive International Diplomatic pressure.
2. Rising security costs to avoid intervention by Sea Shepherd
3. Rising operational costs with the need to retire the Nisshin Maru and replace it with a new factory ship.
4. Diminished markets for whale meat in Japan.
5. Realization that the IWC will never authorize the return of commercial whaling in the Southern Ocean [the prime habitat for the largest , most valuable, baleen whales].

I think he’s right, but I also think that Sea Shepherd’s interventions have cost, and are still costing Japan more than just high security costs. Sea Shepherd broadcasts the news of Japan’s horrific whaling practice more broadly, clearly and effectively than has any other conservation entity; it consistently exposes with devastating effect Japan’s failure to curb her whalers.

The damage should not be directed at all Japanese people but the world ignores such niceties. I am an admirer of the Japanese culture and believe that the people of Japan are not yet fully aware of how effective Sea Shepherd has been, and still is in exposing their leaders’ worst mistakes to the world. I also mourn the fact that the people of Japan seem oblivious to how intensely the whaling issue resonates in western minds. The fact that Japan is willing to continue to practice the unspeakably brutal techniques that are used to kill animals as large as whales is something that no country could possibly be proud of. It is best described as an epic disgrace.

Seventy-five years ago most of the world viewed whales as resources for oil and meat, but rightly or wrongly, much more of the world now loves whales and leans more towards Sea Shepherd’s opinion of them as sentient beings than it does towards Japan’s view that whales are commodities. This doesn’t necessarily mean that Japan is wrong, but it does mean that Japan is on the losing side of the argument. If disagreement were the only consequence, respect for the other side’s arguments could be put on hold or even just disregarded with a shrug.

However, humanity’s principal project of the last 60+ years has been an attempt to achieve more egalitarian rights and opportunities for all races, religions, genders, sexual preferences and nationalities. Although it has been only partially successful, and we still have a very long way to go, it is hugely significant that humans of every stripe and from every continent have become much more awake to the rewards and benefits of respecting their fellow humans, and of the importance of greening the world. Humanity has most recently been almost startled awake by the fact that the most gaping hole remaining to be filled in our quest for a true, egalitarian existence is our lack of respect for non-human life.

I can understand why Japan is exasperated by conservation activism—particularly the form practiced by Sea Shepherd. But when the cause for which you are fighting is as unpopular, outmoded, and brutal as whaling is, and when your opponent is as effective as Sea Shepherd has been, it is time to look for some form of peaceful settlement, and to stop the exponentially accumulating damage to your reputation. For the longer Japan continues this practice that so much of the world finds abhorrent, the more her reputation as a violent culture grows, and the more time it has to penetrate and permeate into the World Mind, and take up residence there with an affinity that becomes stronger with every passing day.

My question to Japan is this: “Is access to a ‘resource’ that one of your respected news outlets reports as being only “a thousandth of all the meat that’s sold each year in Japan,” worth damaging the reputation of your people so deeply, to say nothing of the fact that whale meat is (according to your own scientists) seriously contaminated with chemicals that disrupt the human endocrine system?

Let us also realize that it takes 33 months to experience 1000 suppers—they stretch across a time period of two years and nine months. As I write this it is January 1st, 2019, so tonight’s meatless meal would be your first dinner without meat since April 7th, 2016 and your next meatless meal would be on April 8thof 2021 (it’s a day later because 2020 is a leap year)

“Ah yes,” I hear you say; “But it is not just whale meat you want us to give up, it is a principle. And principles are, as you will agree, more important than one meatless dinner in a thousand dinners with meat.”

Yes, I concede your point, but I also see that Japan’s broad financial success is an obstacle to gaining the world’s respect for the desire of her whalers to keep on whaling. Because wealth is power, and that automatically means that the world approaches Japan with courtesy and respect. But everyone finds it difficult to speak truth to power, so Japan seldom hears the truth about how she is viewed for siding with her whalers. Most of us are rarely willing to come out and say such things as: “Dear people, for your own future, and to keep the world’s respect, please listen without rancor to a viewpoint you have hitherto ignored. In the long run, although you and the Sea Shepherds want the same result—a healthy ocean and healthy seafood—in the meantime the greatest threat Sea Shepherd poses to your future is that they understand something that you do not, and it is the very thing that causes the world to respect Sea Shepherd’s point of view and to disrespect yours.”

This thing that Sea Shepherd perceives and that Japan seems not to take into account is a discovery that I consider to be the most consequential scientific discovery of the past 100 years: that our species is entirely dependent on a collection of other species—all of them non-human. They keep the world habitable for us, a service which they perform for free. We know the names of a few of these beneficial species but not of all of them. Given that ignorance, the only rational way for us to proceed is to encourage the survival of alllife—hoping that we don’t kill, or haven’t killed, either intentionally or accidently, some key species which, though we may not even know its name, is keeping the world livable for us.

I don’t know whether whales are essential for human survival (for the survival of the mental health of many of us, yes, but for survival of our physical health… no one knows that). What I do know is that protecting species that you have never knowingly seen, and cannot even name is hard to achieve. We can, nevertheless, achieve it if we love something enough that we cansee (such as a whale) to want to protect it. Because doing so requires that we protect the conditions that keep the beloved creature healthy. And because whales and people are both mammals there’s a very strong chance that we will also be protecting the conditions that favor the critically important species that also make the world habitable for us—although these benefactor species may include species too small to see, and whose critical functions may be services we don’t understand.

That is why people who may seem to many of us like crazy, tree-hugging, whale-loving fanatics are, in fact, important contributors to society and worthy of respect. And when such “crazies” like me demand that the world protect the species we love, we are contributing indirectly to protecting the unnamed species on which everyone’s life, everyone’s future, and the future of all of our descendants until ‘the last syllable of recorded time,’ depends. That is what whale people such as the Sea Shepherds perceive, and what whaling people, such as the tiny cohort that constitutes Japan’s whalers seems not to perceive. It is why I studied the songs of whales and why my institute, Ocean Alliance, makes films and releases records of those songs, in hopes that it may cause humanity to fall in love with whales. (It does!)

The key to the human future is to accept that there is a need and a value for having reverence for some species, even if many people cannot see that need. It helps if you and I love the rest of life enough that we become determined to ensure that it continues forever. For regardless of the many things on which we can’t agree, it should be possible to concur that much of what humanity has done and still does has made us the greatest threat to life on earth that has existed since the giant meteorite and associated super-volcanos that caused the Fifth Great Extinction that devastated the dinosaurs. And what that must teach us is: that in order to avoid the same fate we must make our number one priority (yes, the thing we even put ahead of all economic considerations—put ahead even of that holy of holies: jobs!) to invent new ways to do everything we do that now threatens the future of non-human life—Allof it. And if we succeed, we will prevail. And if we do not, we will vanish from the Earth, and it will be millions of years before earth recovers to a form that is a good mimic of the way it was when our species first drew breath—but we won’t be there to see that; our failure to act in time and to act forcefully enough will have taken us out along with the key species the earth lost because we had our eyes on the wrong ball—because we were concerned only with the welfare of people, not with the welfare of all life as well as people.