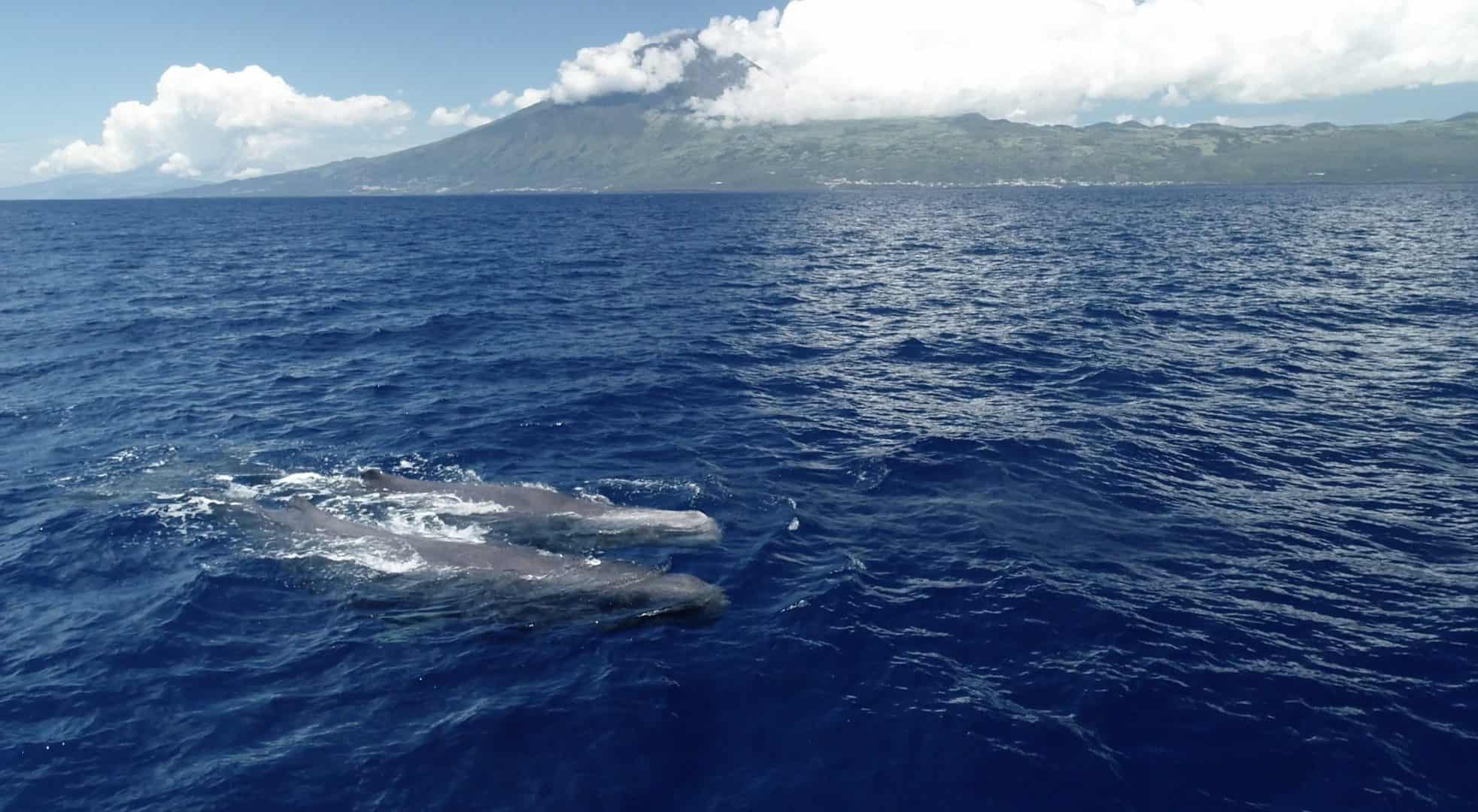 We are just back from 8 hours on the water and what was probably the most successful first SnotBot expedition day we have ever had.

We look at first days as get organized days, we have to work out the new location, new boat & crew, new collaborators, new species. There are a lot of moving parts on these expeditions, how does the boat work for us, where are we going to put the science station, where do we launch and recover the drones from, what is the typical whale behavior in this region and how does this relate to weather conditions. On top of this we are typically tired on the first day from expedition prep, travel (COVID tests) etc so we never set high expectations for the first day.

My emotions have been running high for this expedition, I have spent a lot of time working with sperm whales, but never on a SnotBot expedition and never in the Azores. The last time I saw a sperm whale was in 2014, so I have not been confident that that this would be a successful expedition on all levels. That said we should have the skill sets to be successful…right? We have flown more than 1,000 total SnotBot flights over six species of whales (Southern Right whale, Humpback, Blue, Grey, Fin, Orca). But when we saw our first blow on the horizon, my emotions went into high gear, the blows seemed weak and low ☹.

The last whale I sampled was a blue whale which can shoot its blow up to 30 feet, the blows we were seeing were probably peaking at 12 to 15 feet and with the blows coming from the side of the head as the animal rolled in the swells the blows seemed to shoot out in wild arcs. To add further misery the animals were swimming down wind, so we had to fly sideways (nostril on the left hand side of the head) and backwards (downwind) rather than just fly straight down the body of a blue whale to the huge blow hole in the center of the head. 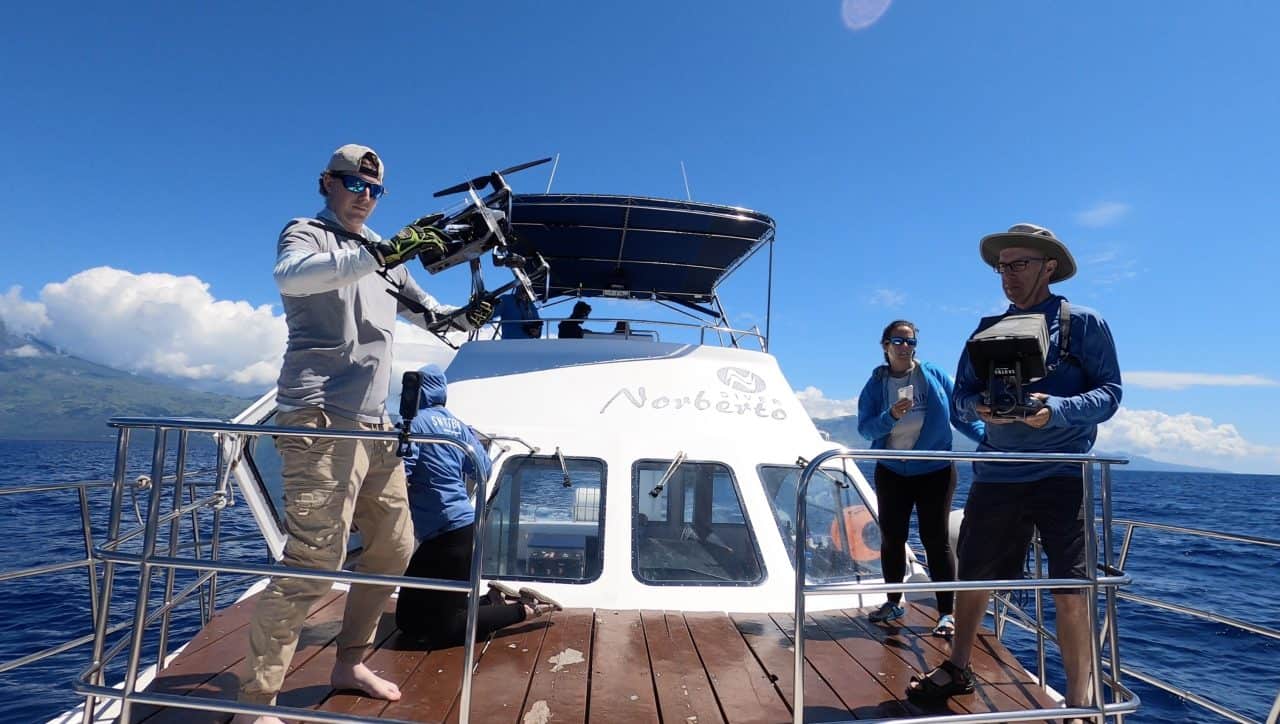 But this is what we were here for so we launched a drone, out of the gate I really struggled to get the drone into the whales blow, but the whale stayed on the surface for at least 10 minutes and blew 20 times! So while I missed more blows that I ever have in a single flight, I also caught more than enough blows to give us a robust sample – whoop whoop. One of the primary goals of this expedition was to see if we could collect sperm whale blows – after 10 more successful sample flights – Mission Accomplished.

The next question was are we/can we collect these blows non-invasively? We and others have found that toothed whales (Orcas and Dolphins in particular) seem to be very curious towards drones, which is a change in behavior so it that would be labelled as invasive, sperm whales are of course big toothed whales. Things were going well with the first ten successful flights over whales with no obvious responses and then came flight 11. When I got close to the whale it rolled over and then opened and shut its jaw (a typical aggressive response). Since the animal was showing not only a response but what we know as an aggressive response, I stopped the sampling process but rather than return the drone to the boat I flew up to about 80 feet and hovered to further document the animals response. 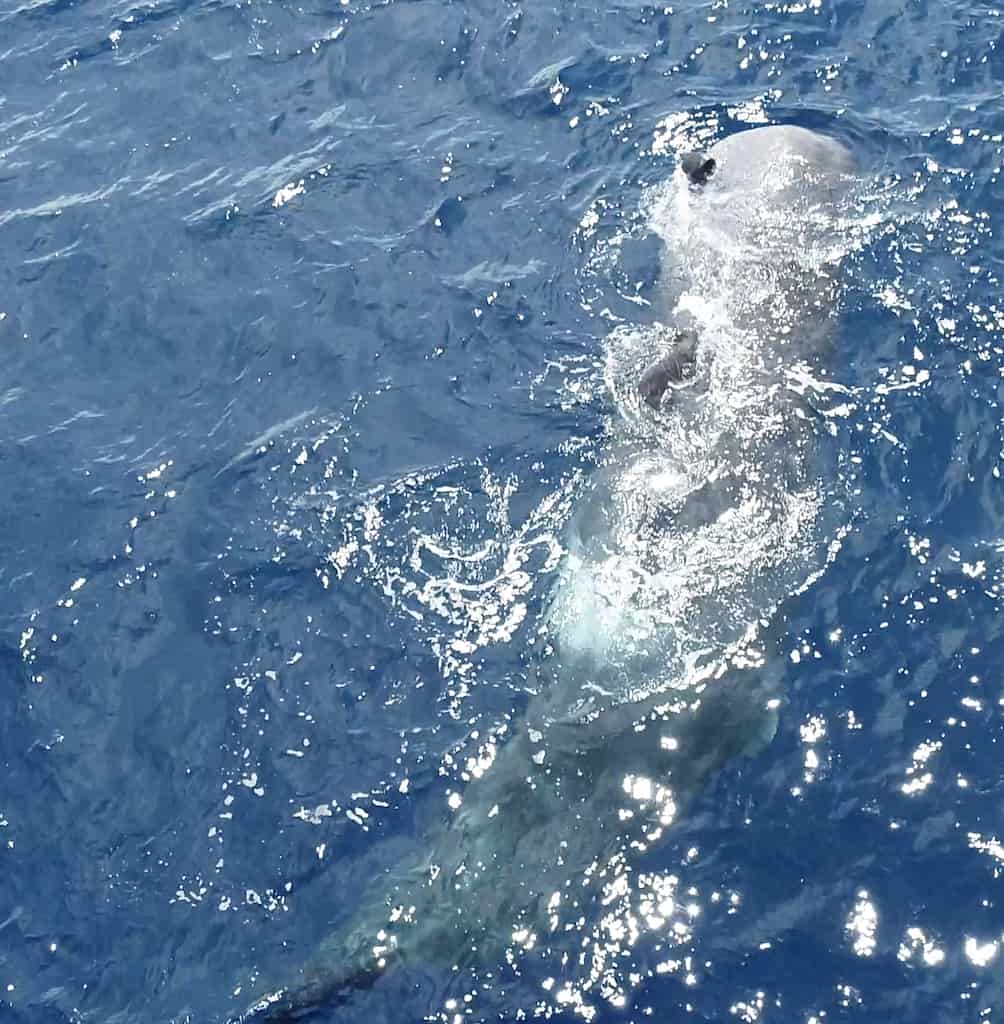 What I saw was one of the most captivating great whale behaviors that I have ever seen. The whale had what looked like a one gallon plastic container in its mouth and it was playing with it. Rolling over, biting it, taking it down 20 feet, letting it drift away, swimming back to it, rolling it off its head into its mouth and repeating the process – as far as I could tell the whale was having a ball playing with this container. This also meant that the whale had NOT responded to my presence at all, it was too busy having fun. 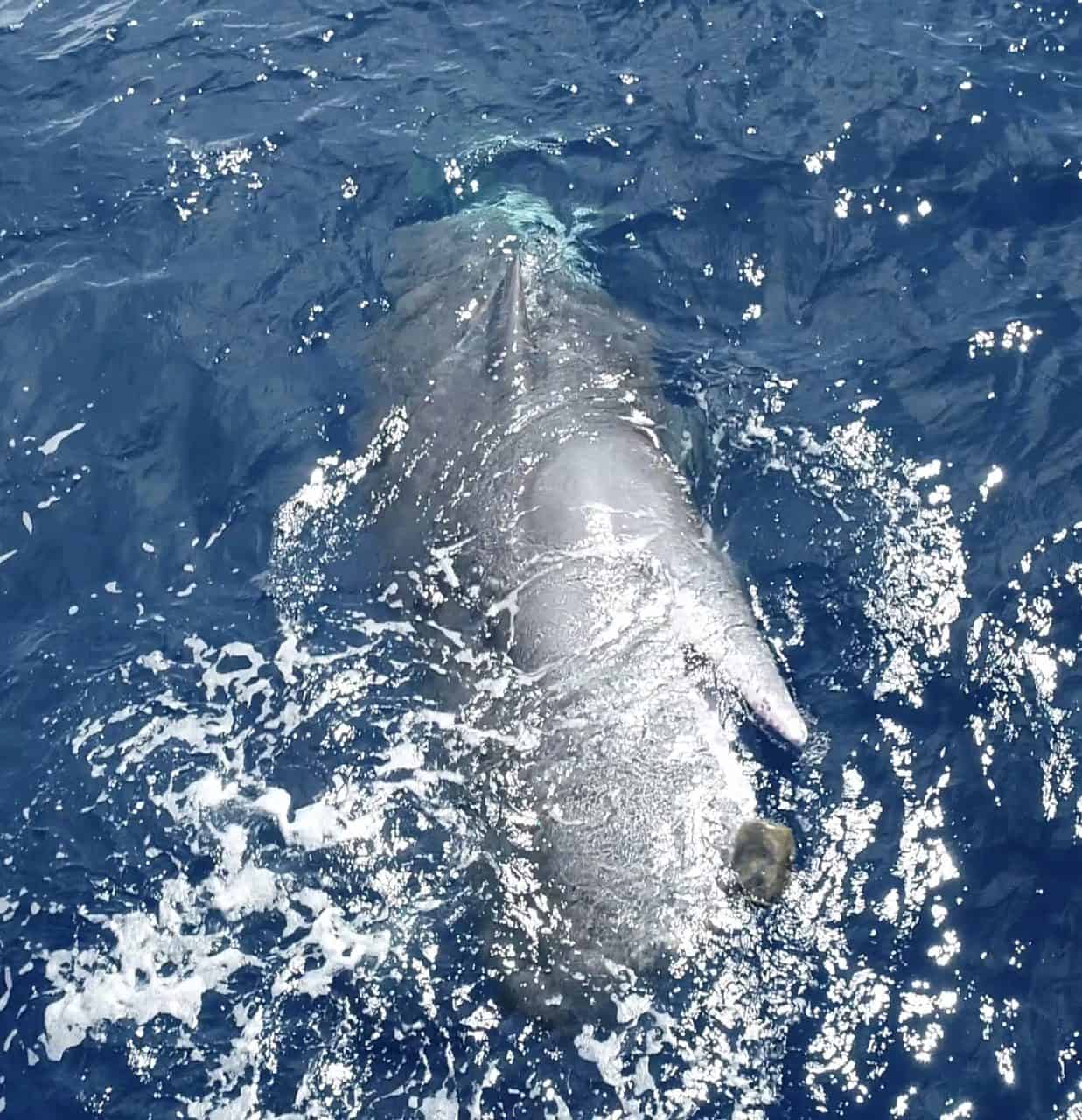 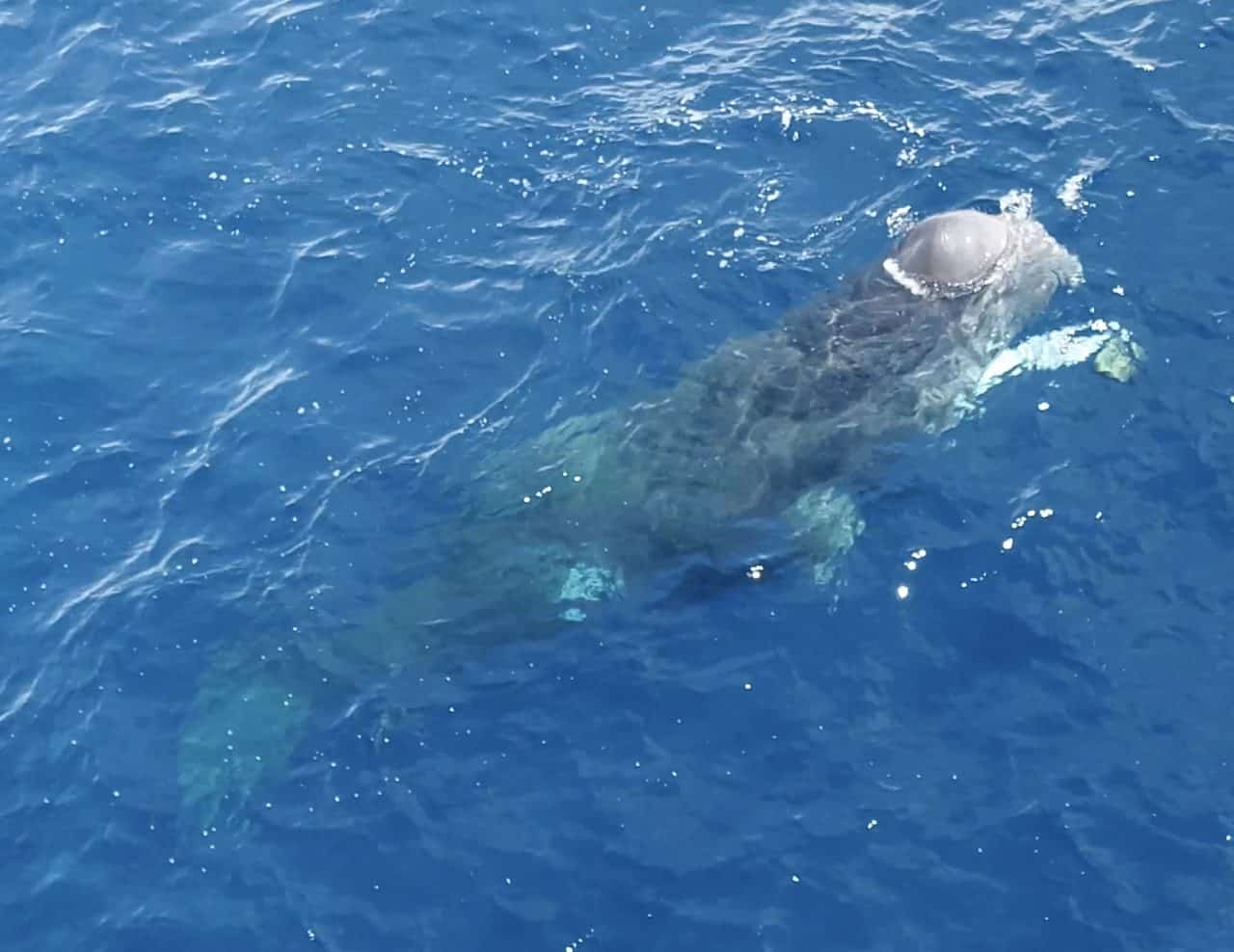 But the story did not end there, a while later the whale let go of the container and started blowing hard, so I flew back down and collected and sample. After the whale dove we went back to pick up the container which was identified as an old Octopus trap – see photo below (If you watch My Octopus teacher you will never eat an Octopus again), and guess what, there was a trigger fish hiding inside the trap. I guess we will never know if the whale was playing with the trap or if it was after the trigger fish, but from our end it was just great to watch (Chris put a repeater screen on the bridge so all of the crew could watch what the drone was seeing). I have attached some screen shots from the drone video (you will have to wait for a clip) and a photo of the trap and of the trigger fish who now swims free! 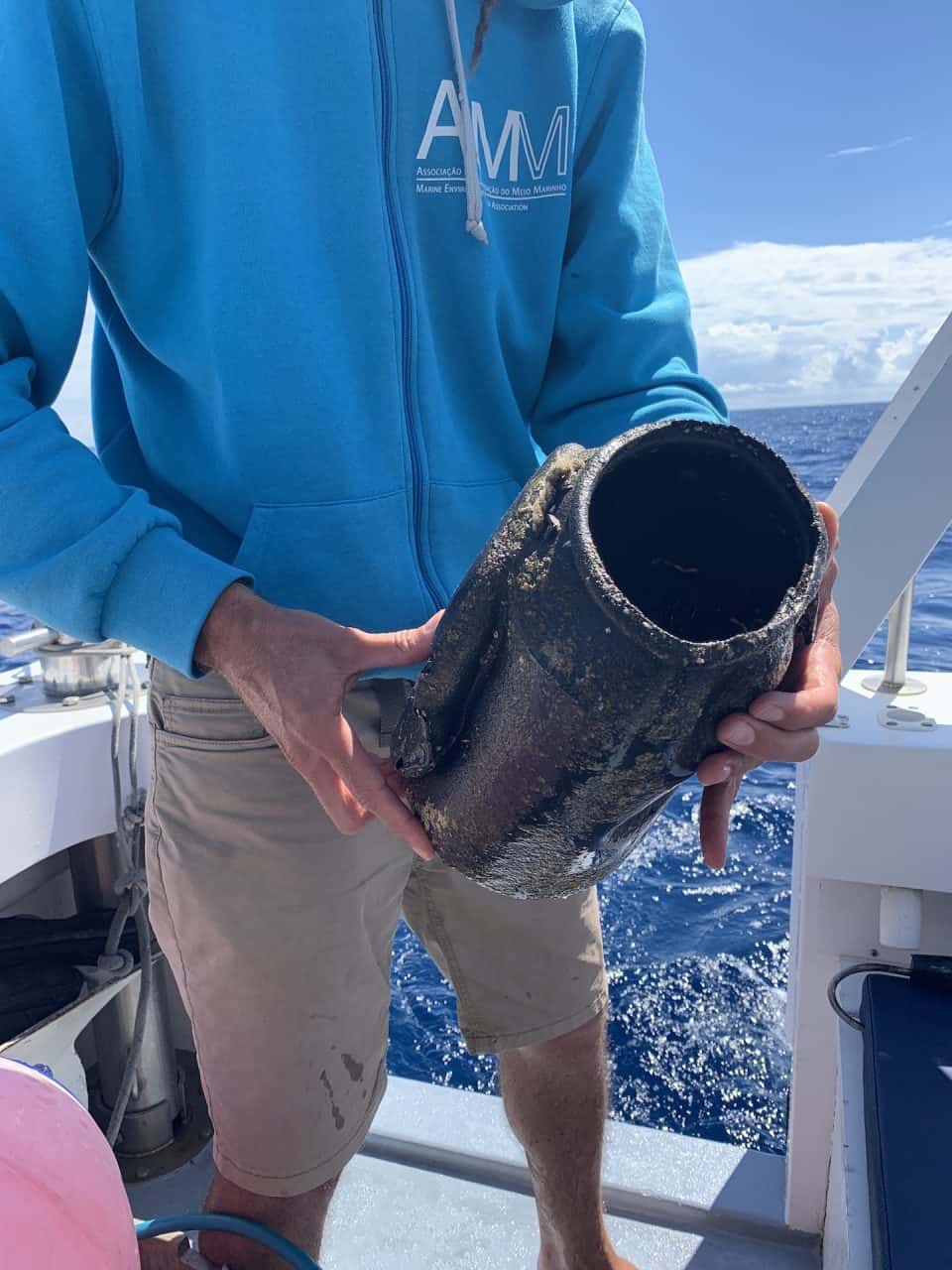 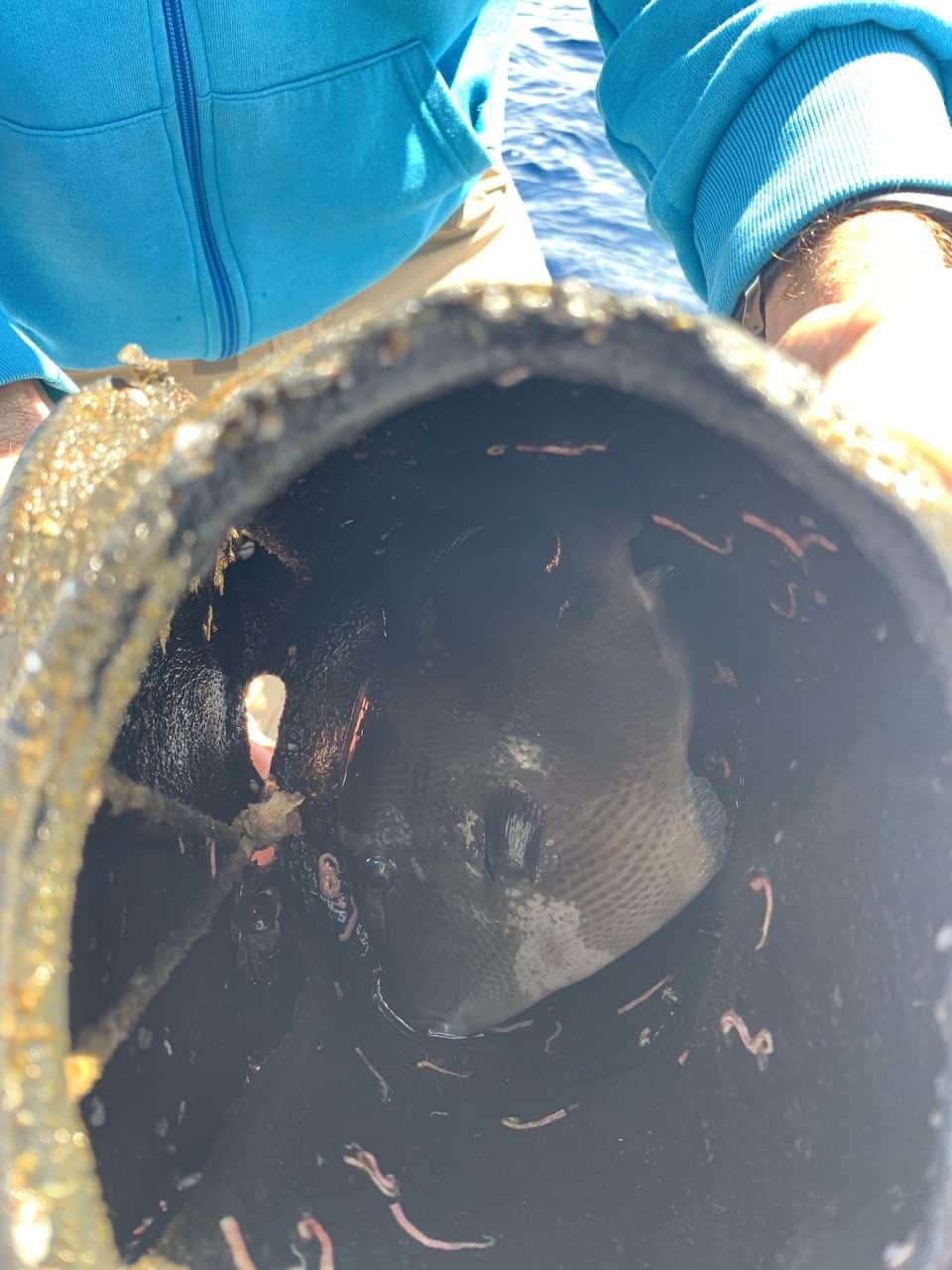 As if all of this were not enough… We also had a very exciting encounter with an entirely different species. While looking for sperm whales, our local guide suddenly called out and pointed out towards the shore. In the distance we could see two animal’s repeatedly breaching (jumping clear of the water). At first we could not tell what they were. As we got closer we were able to identify the animals as beaked whales! More specifically, Sowerby’s beaked whale! Any sighting of a beaked whale is a rare event – these are incredibly elusive whales that typically live very far from the coast. To see a Sowerby’s beaked whale was even more exciting. Even with our team, who have seen and studied whales all across the planet – none of us had ever seen this species. But most exciting of all was to see these animal’s breaching! Another bonus to an already exceptional first day!

We like to document what we do for both professional monitoring, blogs like this and our education efforts. Chris not only flew drones today but was also endless shooting video (thanks for loan of the Sony A7S iii Marty) he also strategically positioned the GoPro and the 360 degree camera, so along with the drone footage we collected a LOT of B Roll (400+ GB)…and we answered half a dozen of the questions that kids have sent to us (in English and Portuguese) for our Parley Education Initiative.

Last but not least clearly they are very superstitious here – no bananas are allowed on board the boat (see attached)!

Thank you again to OceanX for giving us the opportunity to come to the Azores and all of you for helping to keep us afloat and productive on behalf of the wild world in so many ways. My apologies for any errors but I am right tuckered!

We are back out tomorrow at 7:30 am, I will keep you posted but I might not be able to keep up daily blogs.